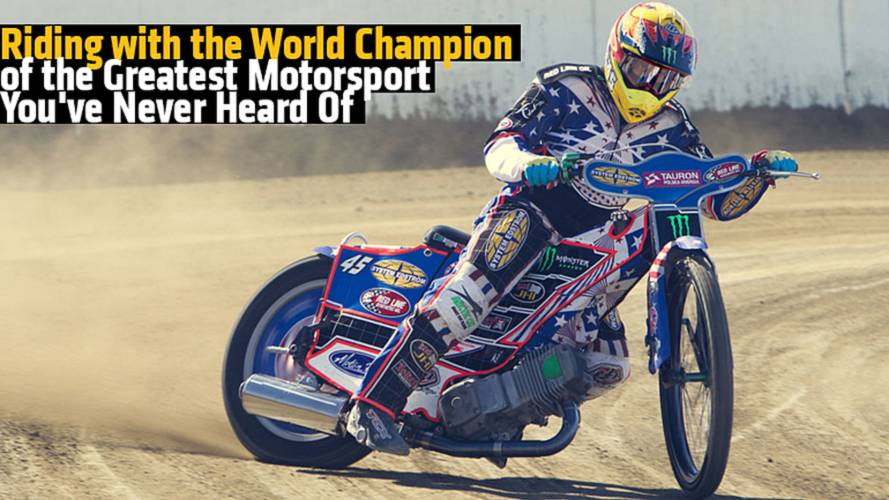 I'll need dirt gear, a steel shoe, and religion. Also, the willful disregard of all hard-learned lessons in physics. Likewise, I should abandon my instincts. Fitness and bravery? They should be on the list, but it's too late.

Greg Hancock is already out there, making it seem easy. He's a three-time FIM Motorcycle Speedway World Champion. His bike is an alcohol-fueled, single-speed, brakeless contraption that stretches the definition of a motorcycle with its purity. Sweet Jesus, the roar of this thing. I'll spend the day learning how to ride the maniac machine from Hancock. I'll also learn what I've failed to learn.

Minutes later I bend the bars in, grit my teeth and wrench open the throttle. The rear-end takes a giant step out, begging for more flogging as my eyes and mouth click open. An instant later, the front wheel hooks up and I'm aimed, god help me, right at the wall. At that moment my left foot, which has been skittering across the dirt, finds a rut and instantly skis inboard toward the front wheel. I imagine my motorcycle-riding shape in silhouette, perfectly punched through the whitewashed boards.

Read More at Road & Track:  This is why you don't screw around on public roads

It's fleeting. A little more throttle and the bike's arc through the dirt is redrawn, just shy of the wall. I'm winded, and then I realize, I'm not. I've just forgotten to breathe. That's lap one, in the bag.

Here's the lesson I've learned today: When it comes to Speedway bikes, the best I can do is hang on for dear life.

You've been missing out on 70-something ridiculous barking horsepower from a 500-cc, single-cylinder motorcycle. The rider slings it batshit sideways while a monster flat-slide carb empties the little peanut tank full of methanol between his legs as fast as it can. Besides that? Spoked wheels, a single-speed transmission and some stone-blasted steel bones that look like they were plucked from a BMX bike. Suspension rebound is accomplished with rubber bands—I shit you not. No brakes, no starter. The whole operation weighs just 170-lbs. Dressed to the nines in the best safety gear I can put my hands on, I reckon we'd fight in the same weight class.

In no other serious motorsport could Average Joe jump in over his head with a master, and on his machine. Would Sebastian Vettel coach you from the infield while you lurched his F1 car around the track? Would Valentino Rossi slap you on the ass and send you screaming through the pit at Mugello on his Yamaha? But speedway isn't like anything else. It's ours.

The origin story of Motorcycle Speedway is contentious in the way that manned flight and the discovery of the New World is contentious. Which is to say that, if you've got an opinion, you're deeply opinionated and probably a fierce nationalist, as I am. Many point to Australia and New Zealand as the ancestral home of Speedway, and a strong contingent pulls for England. Whatever the case may be, Speedway undeniably shared a few wooly shirts and leather crash caps with the heroes of early 20th century racing in the United States. Americans were slinging bikes sideways around short tracks and long all over the US in the early 1920's, but they slid them especially quickly in California, and they still do.

Hancock came up a protégé of Bruce Penhall, the man who rekindled the fire under Southern California's flat track scene. Speedway might be packing stadiums in Europe, England and Australia, but it's fame out west is probably due to the handsome and charismatic Penhall. After earning his stripes on the little fairground dirt tracks of Southern California, Penhall exploded onto the European scene and quickly established himself as a contender. Then, after back-to-back championship wins in 1981 and 1982, Penhall sprung out of speedway and onto TV, taking on a recurring role on CHiPS and abandoning the circuit at the peak of his career. A few years later it'd be Hancock and fellow Californian Billy Hamill that would take up his mantle.

Hancock has been at this thing a long, long time. His first championship win came in 1997. And then he waited. He married a Swedish woman. Had some kids. Did a hell of a lot of racing and was never slow. Hancock gritted through 14 years, lots of racing in Scandinavia, and then found his championship form again. He notched the next two in quick succession, in 2011 at the age of 41, and then in 2014 at the age of 44. The man must be supernaturally patient. That would explain the 14-year championship gap—and also his ease and unerring kindness as I bumble around on his motorcycle in a constant state of panic.

I can't choke down my fear of the bike, but I think I'm starting to do some cool things. I can feel the machine sliding a little. Out in the marbles, the rear gets real loose and I start to keep the throttle on as it goes. I push the bars down. My right foot locks into place in the spring-loaded, horseshoe-shaped footpeg and I clench every muscle I've got over the front of the bike. It rotates wildly right in front of a guy with a camera. Success! At least I've got one awesome photo. I cheer in my mind, redeemed. And then I see the photo.

Try as I might, I can't get Hancock's bike to move under me in any repeatable way. The throttle is too abrupt, the power is too volatile. Even trying to get off the damned thing is a challenge. The bike lugs and burbles against compression and finally coughs and stalls. I skitter my feet across the ground trying to slow the thing like a child, and every time it's about ten feet further than the stand, mechanic, and the laughing, welcoming arms of a bunch of dudes trying to catch bike and rider and arrest my progress. I am way, way too spooked.

Weekday nights in Southern California, that's when speedway happens. Kids stay out past any reasonable bedtime and mingle with a rough-looking but genial crowd. Long greasy biker hair is as common as blonde surfer locks or cowboy hats. The thing is as populist as it is electrifying. Get four bikes on the track at once and all the fierce little single-cylinders combine to sound like a radial-engined air-raid. Add to that noise some decent taco stands and coastal fog, or the sepia blur of smoggy inland sunsets. It's perfect. That's what it is.

The guys that succeed can do the prettiest things with a Speedway bike. Handily sub-three-second 0-60 times mean an incredible, virtually guaranteed wheelie until the imminent first corner, when the bike is slung sideways under even more throttle. All the while the rider hangs outboard, steel-clad foot in the air for balance. It is artful and it is epic. Add three other maniacs and their machines and it gets dangerous. Hancock, renowned for his risk aversion, missed his first race in decades last year after his arm was inhaled by the spinning rear tire of Niels Kristian Iversen's bike in a heat race in Poland.

I knew this already when I made the long trek out to Perris Speedway. I spent the night before watching crash videos on YouTube. Couldn't help myself.

On my last outing my only desire is to reflect well on a day of Greg's earnest coaching, but muscle fatigue and fear has me beat. A friendly gang of young Swedish racers, drinking beer in the infield and blindingly white in their winter plumage watch me orbit, amused. They went through this once, so they're encouraging. Of course, they did it when they were young, so they can't understand my struggle. Drenched in sweat, I pull into the pits. The spectre of perfect white fence and a Wille E. Coyote hole shaped like me and the world champion's Speedway bike will haunt me that night.

I've long lost track of how many racers I've met. Hancock is the friendliest. The kinda friendly that tells you how friendly everyone else is when you compliment his friendliness. "That was looking good." "You're starting to get it." He uses all the little dips of the shoulder and movements of the hand that go with describing a better way to do a thing on a motorcycle, but he grins through all of it as he packs up. The bikes get lifted into the back of a truck, an easy grunt for two guys. The tool chest follows. It's tiny. Just 25 tools can have the whole motorcycle apart. That's including sockets. And a hammer.

Still, I troll Craigslist for an old, beat speedway bike. Still, I look for a steel shoe that might fit my riding boots. Still, I want to get out there and roar alongside some fast guys. I try to explain it to my patient friends. "It's the Reno Air Races at zero altitude." I tell them. "It's Talladega for $2500." Still, I'm droning about it, and I'm not sure where or when it'll end. I can't un-know the experience I've had. The bar for thrills is now set at speedway.

What have I learned about riding Hancock's speedway bike? Almost nothing. I like it. It is entirely unimpressed by me. In this, it's exactly the same as Vettel's F1 car. It is perfect at its job and I am not. All flaws were my own, and I took them home with me.

Almost nothing, but I did learn a little. A battle with the fearsome thing proved to be a master course in anatomy. My after-ride soreness in unfamiliar muscle groups is unparalleled in my experience. I spend the next couple days fueled by mezcal, so we have that in common. Hell, if it ate Advil by the fistful I'd have it over for dinner. I'd enjoy more of its company.

This article originally appeared on RoadandTrack.com