I Bought a Hipster Bike 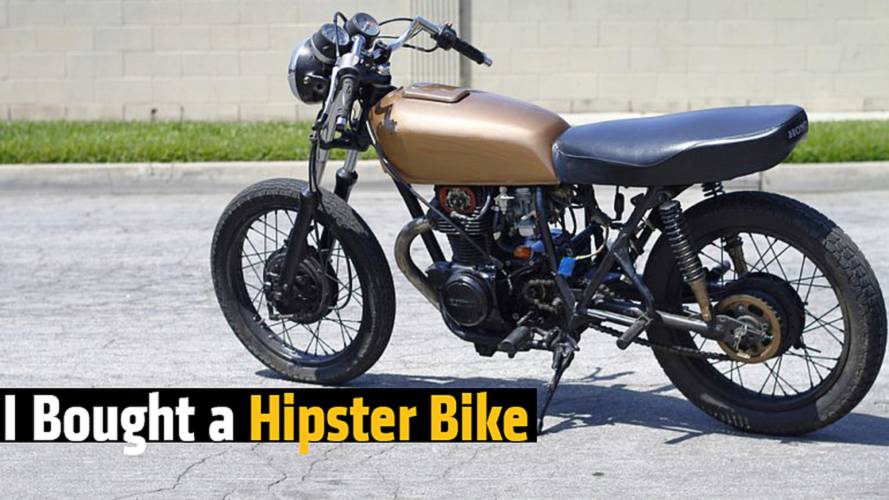 I Bought a Hipster Bike For better or for worse, I bought a Hipster bike. This Hipster special is complete with rattle-can black wheels, upside-down...

For better or for worse, I bought a Hipster bike. This Hipster special is complete with rattle-can black wheels, upside-down Clubman bars that hit the gas tank on both sides, worn out brakes, open exhaust and pop-on air cleaners. It’s a vinyl-owner, kale-eatin’, Liberal’s wet dream and it’s now mine.

Starting life as a 1976 Honda CJ360T, it has since lost its fenders, tail section, mirrors, handlebars and factory paint.

“I got it at a good price, and I couldn’t pass it up,” is what I keep telling myself. It may or may not be true, but I did factor that if I have to get "out from underneath it" (the Southern way of saying to get rid of it before too many mechanical problems consume me and my wallet) then I could sell it for roughly the same or more than I paid for it... but then again, that may just be another lie too.

The bike was built in Tennessee, but I use the term built loosely. It was used in a music video, and when the production company needed re-shoots, the Producer shipped the bike here to Los Angeles. After the taping, he purchased it (or more likely it was gifted to him) with intentions of giving it to his brother. In the meantime, his brother purchased a new motorcycle. This ultimately lead me to his Craigslist posting a few months back.

Why in the hell does every “Cafe” bike have dents in the tank due to the handlebars? Doesn't anyone turn the dang handlebars lock to lock before riding it around the block? When we arrived to look at it, the Clubman bars were turned right side up, but there were two fresh dents on either side of the tank that led me to believe they were originally upside down.

It’s apparently really hard to find a motorcycle with a clean title and no back fees in LA. It's the title, money, condition trifecta where one comes at the sacrifice of the other two. The previous owner posted it online a few months ago, and then took it down after discovering the title wasn’t transferred from Tennessee to California. Luckily, he remained in touch with me until he received the new title. Normally, a Craigslister just wouldn’t care, and instead brag about how they’ll do you the ever so gracious act of writing you a bill of sale, as though it’s some sort of favor. Instead, this guy actually did it right by transferring the title and spending a heavy chunk of the asking price just to register it in CA--this was the major reason I bought it.

Now, it needs a lot of loving and mechanical sense to be brought back to life.

The Fixes That Need Fixing

Here's an extensive list of everything I've found so far:

The battery was zip-tied in place and laying on the swing arm.

Biltwell has been nice enough to offer some help on the project. I'm thinking of putting the the Moto 7/8” bars black, with their Thruster grips, and a Whiskey cast throttle assembly. With all that, I’ll need new controls like a kill switch and horn button (any suggestions please comment below).

I’m currently getting carried away late in the evenings with polishing the engine covers. I've been using a hand-me-down 6-inch bench top grinder with a Fine wire wheel on one end and a Harbor Freight polishing pad on the other. I laid an engine cover on the wire wheel, stripped the paint, then wet sanded it finely—finishing it off with the polisher.

Naturally, I didn’t take a before photo for the same part, but here’s a photo of the crappy spray-bomb job the guys did on the engine cases.

I'm trying to find a battery I can mount sideways. Many guys like AntiGravity and Ballistic Batteries are great, but it’s more power than I need. I think a factory replacement battery for a late-model naked or sport bike will be a little cheaper. Since it’s a kicker, I don’t need a heavy-duty battery, as it’s only powering the lights, horn and coils (no starter).

The first concern is finding a decent muffler, I'm going to try Biltwell’s Canon Mini Muffler replacement muffler that features threads for a mounting bolt, fiberglass, and it’s only $20! Hopefully it'll sound mean and be easy to install.

READ MORE: Hipsters vs. Real Motorcyclists: How To Dress Like a Badass Biker | RideApart

After getting it home, I immediately knew something was wrong after firing it up cold. It was greatly struggling for fuel. I first pulled the bowls off the carbs to check for dirt and rust. After pulling the fuel lines off, I noticed the petcock was on, but nothing was coming out... well, that’s not right. I'll see what's wrong in the next installment (and no, damn it, it’s not out of gas.)

I naturally forgot to take good before photos, but instead jumped right info removing the exhaust and battery.