12 Tips For Buying a Used Motorcycle 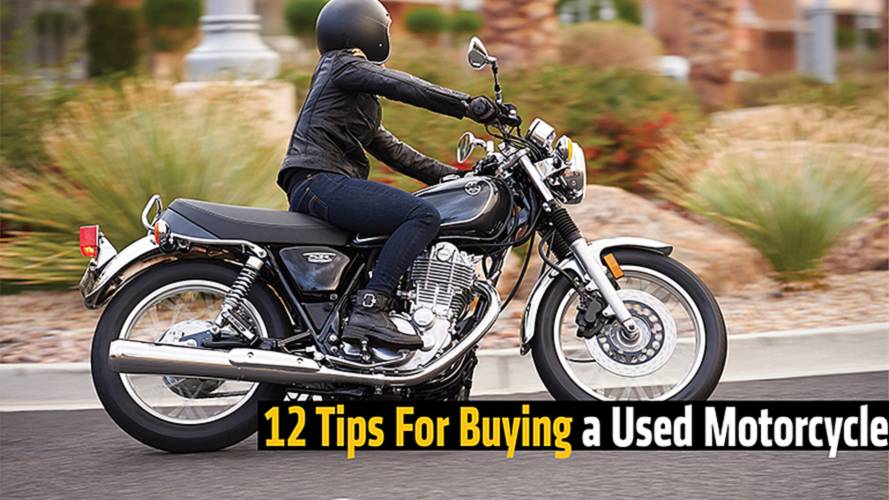 12 Tips For Buying a Used MotorcycleFor most, motorcycles are not a necessity. You can be damn sure they are a must in my life (and probably yours if...

For most, motorcycles are not a necessity. You can be damn sure they are a must in my life (and probably yours if you're reading this), but for normal people, they’re a luxury. So, when you only have so much money, buying a motorcycle at almost any price is an investment worth taking seriously. I know I can’t afford multiple motorcycles, no matter how hard I try.

We’ve written a story on how to buy a used motorcycle, but tips and learning experiences are subjective and we thought it was time for an update.

I grew up on the other side of a parts counter. I was raised in a family of barters and grew up going to swap meets several times a year. I'm now obsessed with attending them on my own. I swept the floors of a dealership, bought cheap parts and wrecked bikes as I grew older, but I’ve been amazed at how much more I learned from my recent months of searching for a new horse in my ever growing stable.

We’ve been scouring the earth in search for an inexpensive, small, and cool motorcycle for my fiancé to start riding, also something I could steal when my bike’s broken (We finally bought it, read the Hipster Bike Piece at the link above).

Here are a few tips I’ve gathered—mostly from personal experiences—on how to buy a used motorcycle.

You want it cold! This is one of my favorite tips. When you first go to look at a bike, let the seller know not to crank it and warm it up. A warm engine is easy to start and can hide many tuning issues. A cold engine, however, can show the weak links in the chain.

My soon-to-be uncle in law recently sold an older Yamaha and the buyer asked him not to crank it before he came to look at it. “Man, that thing was a pain in the ass to get cranked. It took us forever,” said George, “but he did buy it.” Then, after some thought, “well, he talked me down a few hundred bucks though.”

Brake pads/shoes, clutch cable, throttle cable, intake tubes, carb rebuilt kits, petcock rebuilt kits and tires are a must. If parts are hard to find be wary—very wary. Also, don’t give me that, “Well, I’ll just make my own parts.” Can you make new jets from scratch? How about a head gasket?

Our Honda project needed brakes (luckily we knew this before going), which were easy to find at places like PowerSports Place for around $40 for two sets of (front and rear) shoes. We also assumed it needed a clutch cable and a head gasket (because of a described oil leak over the phone). We were able to find all of the parts for under $100. If it needed tires and other items, we could be out an extra $500. It's important to know these amounts before going.

These figures can not only tell you if you’re over budget, but can also be useful in negotiation. Saying things like, “My max is BLANK and the price of new tires and brakes at your asking price will put me over my budget. Would you take BLANK off your asking price?”

It’s all about respect—show up on time, don’t insult them, and don’t screw around.

Take pride in their ride. This is a piece of machinery that has established an emotional connection with the seller, so compliment it.

Have a reason why you want to pay less money. For example, list out the parts or the back fees, and express to them your budget. Don’t simply say, “It’s junk and not worth the asking price.” Be kind, respectful and patient. Compliment the item and if you make them a lower offer than the asking price, don’t insult them. Make it clear that it’s how much you can spend, not how much you personally think it’s worth, at least not without indisputable evidence.

Be friendly, but be upfront. Don’t waste the person's time by rescheduling twelve times, showing up late, taking up most of the seller's afternoon, and then finishing it off with an offer that’s half the asking price.

I almost made a very bad purchase a couple weeks ago. I made an impulsive decision to look at a H-D Sportster 883 (not pictured) the afternoon it was published on Craigslist. It needed work, but the asking price was right. I showed up and learned it was on a mechanic’s lean, which is a messy ordeal with the DMV. It’s all up the mechanic to do the proper paperwork and if they don’t, it can be a big problem for the new owner. I didn’t believe this seller did the proper work, as he explained things differently than the DMV instructed.

He was amped, bouncing around his shop and hard to follow. He claimed the paperwork was somewhere else, offered a box of parts that appeared to came from several different bikes, he wanted to switch out the wheels and the bike was rougher than originally described. I wasn’t sure if this was a conscious technique to overwhelm and confuse me, but it worked. According to the seller, it had no back fees and ready to be registered.

I made an offer and he countered too high. I shook his hand and said I’d think about it.

Later that night, the seller’s son called me back (they had listed two phone numbers on the ad) unbeknownst to him that I had already seen the bike that day. I asked him about it one last time, to which he said, “Well, it has $700 in back fees.” I asked him to clarify that one more time and then said no thanks. His response was, “Well, you better make your mind up quick, we have a lot of people looking at it…."CONTINUE READING

That above line, “well, you better make your mind up quick, we have a lot of people looking at it," gets under my skin more than anything else when it comes to the used market. "You better buy it because so many people are calling about it and want it.” Then why isn’t it sold yet? Why are you talking to me on the phone or even dealing with me if so many others want it?

Another bike I found, a thumper Suzuki, was posted on Craigslist with few details other than that it was very clean with very low miles. Later, I came to find out it wasn’t running. I went back and forth with the owner for roughly a week when he told me 20 people wanted it... but he still hadn't sold it. He later said, “Well, everyone wants it running.” Yes, a lot of people were calling about it, because he mislabeled the add as this great, ready to go bike for cheap when it really was an over-priced bike that wasn’t running. Just because the seller claims many people are looking at it, doesn't mean it's worth buying.

This is a must, especially in California with back fees. Obtain the VIN number (or in California the last four digits of the VIN and the tag number) and call the DMV to verify how much it will be to register the vehicle to a new owner and also to make sure it isn’t stolen. One last thing is to verify the current title holder’s name. Make sure that’s the name on the title when the seller hands it to you and that that's in fact the seller. When you’re done take a photo of their driver's license.

On the first phone call you should obtain as much information as possible. If the bike is cheap and at a very good price, then don’t frustrate the seller with too many questions. Chances are they priced it that way to simply get rid of it without a hassle, so don’t become a hassle.

If it’s cheap: How long has it been sitting? Any issues with registration/title (here you need to check if they’re honest when you call the DMV)? Why are you selling it/story behind it? What have you done with it and how did you obtain it?

If it’s expensive, than feel free to ask things like: when was it serviced last? Who serviced it? When were the fork seals replaced last? The tires, brake pads/shoes, etc. last replaced? Ask for service records. If they get aggressive or seemingly frustrated with the questions they may be hiding something… or just being a jerk.

If it’s not running, then it better be cheap. A non-running motorcycle could be due to many issues. Also, simply checking for compression doesn’t tell you much either, despite what the seller will try to tell you.

Ask the seller what they think is wrong with it. The owner may let it slip (if they’re attempting to be dishonest) that they’d tried many things and given up and wanting it to be your problem now. Listen very carefully to the answer of this question—it can be a big tell as to the true condition of the bike.

Have a Way Out

Not just your own personal safety (like don't show up in a dark, back alley you're unfamiliar with), but also financially. If you think you may have to replace certain items and have a major investment, then make sure the price follows accordingly.

Our Honda project will require a lot of work to make it perfect—brakes, petcock, paint, polishing, handlebars and soon to be tires—but the price was worth the risk.

It always helps to have a mechanic friend. Maybe offer him/her a free lunch (cough, cough, to those who ask me to do this). Even if you know everything (or at least think you do) still bring a friend for safety and to keep your excitement in check.

I made the mistake of not doing this once with a 1966 Oldsmobile Delta 88. My friend Brandan (yes, I still blame you for this), wasn’t able to come with me to look at it. I went by myself and became very excited I finally found a big, American convertible I could afford. So excited in fact, that it caused me to be blinded to the bad engine, rusted-through quarter panels and junk interior. But I did get a free pair dress pants that was used to hold the rusted through quarter panel brackets from rattling.

...and when you’re done, then go research. How much does it cost you to Google something? Exactly. Check the forums throughly.

I’m currently in the market for a Ford Econoline van for hauling motorcycles, parts, people and things (also I can sleep in it). The Ford platform has had many variations with very subtle visual differences, but, what's important are the major drivetrain changes through the years that a current owner may not know about. Things such as the crumby early fuel injection system that’s known to fail from the early ‘90s, or maybe a change in transmissions from a certain year span that’s notorious for failure.

It’s very helpful you know mechanical changes and variations within a model’s timespan before you ever start looking. The same goes for motorcycles of course. One sign is a jump in price points from one model to another.

What are some tips or experiences, good or bad, that you've had with buying used? Comment below.

MUST READ:  Dump That Pile: Why You Need a New Motorcycle | RideApart