CBS to Air CotA MotoAmerica Races One Week Later...No Thanks 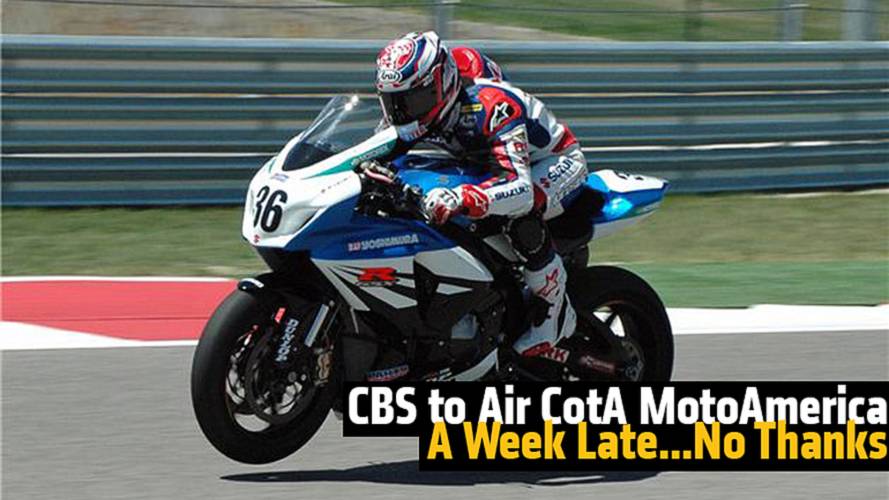 Apparently there was a MotoAmerica race this past weekend. You wouldn't know it unless you read about it because there was no live coverage of the event.

Cameras were there, talent was there, the races happened and the winners were crowned. Except, much like a local black out for the NFL, no one watched it on television or on the internet. It's hard to increase the number of road-racing fans in America when no one can actually see live coverage of races.

MotoAmerica's television deal with CBS Sports is a flawed terrible travesty of sports broadcasting that may kill the series entirely. The preview show announced that the season happens on April 15th. Yes folks, three days after the racing ended at COTA, CBS will air the season preview show. They will pontificate on possible race winners, break down the match ups, and handicap the teams possible performances...after the the first race happened!

I honestly cannot say this enough: How do you broadcast the preview show after the first race? The race won't be broadcast until the 19th when no one will give a hoot. The race results were published roughly 20 seconds after the race ended on social media, motorcycle websites, team pages, and well, pretty much anywhere on the internet that cares about racing.

On top of this, the live timing on the MotoAmerica website failed during the races. If live timing can function in the land of carburetors and monster trucks running on nitro, you would think a motorcycle series could get it to work. Am I being overly harsh? I don't think so. I feel like we, as a motorcycle community, aren't being harsh enough. Every time we accept the mediocre, we will continue to get mediocre. Watch FlatTrack racing on a web feed and you will be astounded at how well it works despite having that amateur feel of a Saturday night dirt track race, which by the way, I love. I think that model is what should happen to the "big boy" series.

Let me clear the air a little bit. I'm passionate about this subject because I love motorcycle racing. I want to see this series thrive, not just survive. I want it to be the best national series on the planet bringing in talent, money, and manufacturers on an even playing field. That will not happen with the current television deal and without real time racing coverage.

Tell us what you think below of the TV deal and of course feel free to disagree with my take!