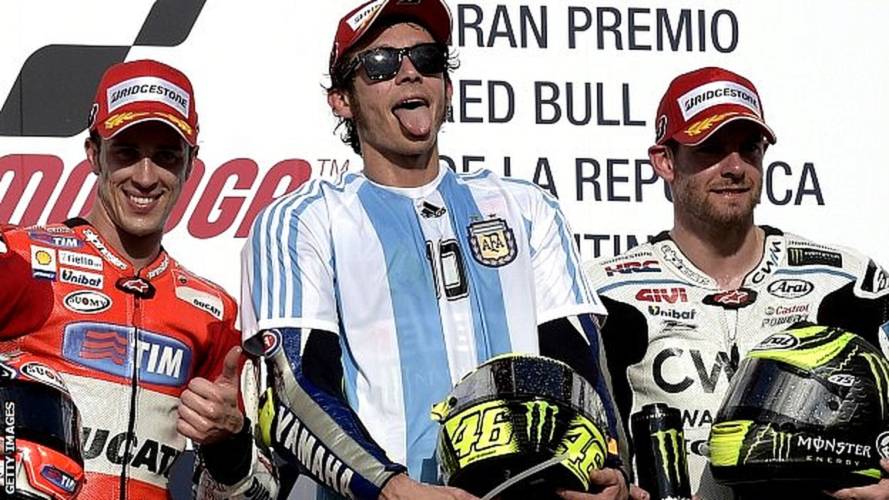 What happened in the racing world this weekend? Read our results for the answers.

A bunch of things happened this past weekend that really shook up points standings and season championships. Do not read any further if you don't want to see who won and lost this weekend!

Jonathan Rea (Team Kawasaki) continued his utter domination of WSBK scoring a double win at Assen. Starting both races from 2nd on the grid, he led flag-to-flag in the first race, and once he dispatched of his team mate in the second race, he was virtually unchallenged to the checkered flag. So far this season, Rea has either won or finished second dropping—only 10 points.

One of the only two men to previously beat Rea is 2nd place finisher Chaz Davies (Team Aruba, Ducati). Last week at Aragon, Davies took the Ducati Panigale's maiden WSBK win. He followed up that performance with a very strong double 2nd place finish. Davies was the only rider to keep pace with Rea in either race at Assen, but lacked top end going down the back straight where he needed it the most.

Michael Van der Mark (Team Pata Honda) finished 3rd in both races marking the first time in WSBK history that a Dutch rider has ever finished on the podium.

Valentino Rossi (Team Yamaha) scored his 84th premier class win—his second of the season—and extended his points lead over his rivals. Not a bad weekend for a guy who was considered washed up and too old just two years ago. Rossi was able to catch up to and pass Marc Marquez despite being four points behind the Spaniard at one point in the race. Yes, some of this is due to a better tire choice, however, Rossi passed seven people to get to Marquez and then dispatched of the Spanish rider quickly and convincingly. Unfortunately, Marquez crashed out immediately after being passed by Rossi.

The resurgence of Ducati is not fleeting. Andrea Dovizioso once again finished 2nd making that three consecutive second places to start the season. Th4 odds are pretty good that Ducati will win a race this season as they have shown excellent performance on three very different tracks. One wonders with Pedrosa's issues if Honda regrets not keeping Dovi on the payroll.

Honda did make the podium, but not with a rider you would expect. Cal Crutchlow put in a stellar ride to bring his factory satellite Honda home in third place. Crutchlow's time at Ducati was tumultuous. In regards to racing with Honda this season, we haven't heard much from him except good results and continued improvement. Maybe knowing he is running out of chances to make it has settled him down and imbued him with some consistency. Only time will tell.

If you're wondering what happened to Marquez watch the video. You decide—did Rossi lean over a little harder than normal or was it a clean contact?

If you can find British Superbike to watch on any medium you need to see it. This is some of the closest, most aggressive motorcycle racing on the planet. It's two-wheeled touring cars trading paint and making a hole when there isn't one.

Just like WSBK, British Superbike saw double finishers at every step of the podium.

James Ellison (JG Speedfit Kawasaki) started from pole and finished on the top step of the podium in both races. Intense battles with his rivals couldn't stop Ellison who has really been on form this season and currently leads the season points standings.

Shane "Shakey" Byrne finished a double 2nd on his PBM Kawasaki. A few weeks ago, Bryne was undergoing recovery and talking about missing multiple races, however, his second place finishes keep him in title contention. The four time champ won't be happy until he wins, so expect him to come out swinging at the next race.

Josh Brookes (Milwaukee Yamaha) also had a consistent weekend finishing third in both races. Considering the brand new R1 was delivered just before the season and they have developed it on the fly, their competition had better be on notice. Once they get it dialed in, the Milwaukee Yamaha rider will be a real force at the front of the field.

You still couldn't watch the race live, but we do have results from the weekend at Road Atlanta.

Cameron Beaubier (Graves Yamaha) did the double as well this weekend at Road Atlanta. Seems this was the weekend for double wins in every series. Beaubier did it in some of the harshest conditions—winning in the rain in race one and surviving a drying track in race two that caught many of his rivals by surprise. Several crashes helped shape the points battle for the season title.

That's a wrap. There was a lot of racing this weekend and a lot of things happened that will have far reaching ramifications on the points. What was your biggest moment from the weekend's racing?