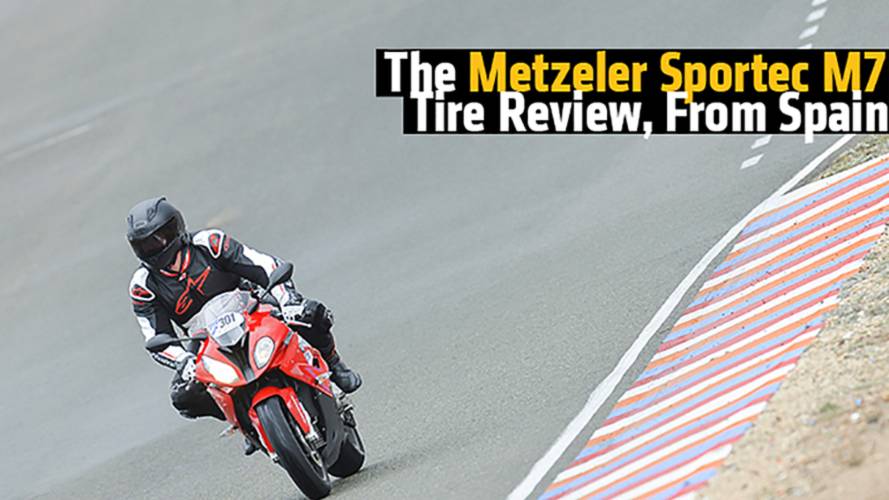 The Metzeler Sportec M7 Tire Review, From SpainAs I’m sitting trapped inside a tin-can that is this tiny little plane above Southern Spain, I begin...

As I’m sitting trapped inside a tin-can that is this tiny little plane above Southern Spain, I begin to regret my decisions the night before. I made the untimely mistake of telling a large group of 20-something Englishmen in a pub in Madrid Spain (the only pub in the entire city) that I had gotten engaged the week before. The rest was just a blur.

We landed in Almeria, Spain, which is a tiny town with a one-lane airport on the water. The sky was blue, the air was cool and the sun was warm. Unfortunately, this was the only bit of sunlight we saw from the rest of our stay.

We arrived at a beach front hotel, bags in hand, circles around the eyes, and smelly clothes on our backs. The group of American journalists were offered a chance to ride before we made it to the check-in desk. Naturally, we all jumped at the opportunity. Our trip was shorter than our total travel time, so there was no sleeping or resting to be had.

Behind our hotel was a series of small rental garages. One featured a group of Audi’s in camouflage, next door were Porsches in car covers, and another garage featured some stacks of beaten and thrashed tires. At the very end was a group of several hundred brand spanking new BMW bikes—essentially every street model (no GSs to be found) stacked, prepped and ready with a full tank of gas.

I was exhausted from travel and didn't have a clue about the roads we were going to ride, so I picked the bike I was most familiar with—a 2015 BMW S1000R (we didn’t do any photography the first day, but the next day we all rode 2015 BMW S1000RR, pictured).

The next day the rain came in stronger as we mounted up to ride to the track. I’m in Spain for two days on a 2015 BMW S1000RR, you think I’m going to take the bus?

Of course, the electronics played a major role in our trip’s festivities, as (almost) 200hp on wet, cold roads typically don't make for great riding. However, Metzeler really emphasized, “grip in all conditions," and how the new Sportec M7 RR tires were designed with electronics in mind.

While the names Sportec and Racetec aren’t new, the M7 tires share very little with previous models. It’s been five years since Metzeler last introduced a Sportec or Ractec tire, the M5.

The “grip in all conditions,” slogan comes from a variety of new attributes about the tires, from polymers that remain soft in low temps to the tire’s new dual-compound construction, which is a fancy way of saying the tire is made with two different layers.

That center strip mixture of harden materials carries through the inside of the tire as essentially one piece—the inner most layer that spreads sidewall to sidewall. This layer features 40 percent sidewall compound mixed with silica (while the center features 20 percent). This inside layer that makes up the dual-compound construction not only brings some added rigidity, but it more importantly spreads heat. So while the center of your tire generates heat from riding straight, the sidewalls will become warm before they’re even used.

“Precision, stability and performance consistency were the three primary goals of the tire development,” said a Metzeler rep.

“Riders want mileage and be able to ride in various conditions safely. You have to enjoy the tire when you’re riding fast and you have to be safe,” said the rep, "not only in grip, but in confidence and feedback.”

Another important part of the tire development was the tire’s absorption under load. The ideal action of a tire is to absorb load by flattening out onto the road, keeping the tire firmly placed on the surface like your suspension. The major trick is you don’t want it to rebound like a worn-out shock—bouncing the tire down the road. Meaning, the tire needs to be soft and rigid at the same time.

Metzeler reduced the fiber inside the tire by 20 percent, using stronger textiles with close weaving. This new generation of textile has a 60 percent higher tensile hardness. This allowed for more rubber inside the tire. The textiles don't distribute heat like rubber, so less textile means more rubber, which means more heat across all of the tire. The profile shape of the tire also plays an important role—acting like a shock, but without too much rebound.

Less movement means less wear. Metzeler even designed the groves with this in mind.

The grooves in the tire were also changed compared to the M5 generation, they’re now shorter and purposely placed to allow for better water drainage. They’re also designed with tire wear in mind, allowing the tire to wear evenly across the surface, not just the center patch.

The profile of the tire has a five percent larger footprint when cornering, and the geometry makes for a quicker lean going into a corner. The sidewall was also raised 3mm, which helps increase torsional flexibility that expands the traction off a corner.

The Electronics or the Tire

Metzeler went crazy with the creation of this tire, taking into account normalcies like mileage and safety, but they also concentrated on feedback, rigidity, and even the electronics of modern bikes like traction control and ABS.

“This tire was made for bikes like the new R1 and new H2, along with the BMW R models,” said the Metzeler rep.

With ABS, it's not about the compound it's about the reaction of the tire. Tire development is extremely important to work with ABS.

“It's not that ABS would fail, but this reaction time from the tire will shorten the distance,” the rep said, “it's not so dramatic as it is with traction control.”

The tire makes a slow, dampened transition with the ABS. On and off over and over again, it quickly needs a clutch or something more smooth to shorten the distance. The Sportec provides a quick absorption under hard load, working with the ABS, not against it.

The Bike or the Tire

One of my first questions was what tire is stock on the BMW? Well that’s a gamble. Due to labor strikes (or at least that’s the rumor) BMW stopped specifying an exact model tire for a particular bike. This stops any potential hold up on the assembly line.

So much of riding these BMWs on the trip was a division of machine and tire. Which is best or which is better? It appeared to us that the Metzeler Racetec tires allowed you to push the BMW to its outer-space-like limit of performance.

On the wet, cold track, we only used the Sportec, which are designed more for street riding as they'll remain grippy in colder, more wet conditions. We only slipped out once when trying to keep up with another rider. Exiting a corner, leaned over with the suspension compressed, we rolled on too early. Not restricted by rain mode, the bike stepped out abruptly, but predictably.

That’s what's important in a good tire: predictability. My experience with some race tries (cars or motorcycle) have been when they slip, they’re gone. Pushing them to a much higher limit than a typical tire, but when it reaches its limit, it disappears—a high, but violently quick drop off. Luckily, the Sportech is not like this. When it stepped out, it remained grippy even if it was no longer facing forward. It was easy to keep under control and we were right back on the throttle chasing the carrot that was now in the shape of a BMW S1000RR taillight.

Unfortunately, our crappy weather conditions limited our time spent on the Metzeler Racetec tires. Luckily, however, Metzeler has offered us a set which we’ll be trying out on the RideApart Suzuki GSX-R600 project bike at a couple Southern California tracks and roads. Check back for a Bruce Speedman update.

For the average rider, who may only, once in a blue moon, visits the race track, the Sportec RR will be plenty of tire, but the rider who sees a race track as much as street, the Racetech RR will only work.

The Sportecs remains way grippier than we expected them to be in our cold and damp conditions. It was hard for us to push the bikes as expected them to wash out on the wet track, but that never happened.

One experienced rider had a fluke, and laid it down during a warm-up lap. That was the only incident of the day, he went back out and never complained of a slip up after that.

Many journalists took a couple laps and then went back inside to relax and dry off, leaving the track wide open for guys like myself and Ron Lieback with Ultimate Motorcycling. We ran the bikes until the fuel lights came on.

Most riders left the BMWs in rain mode, but honestly after jumping on and off a couple bikes I forgot and found I was in Street mode for most of the day. This gave full hp, with less restrictions on traction control. Again, even without Rain mode we only got the bike uncomfortably sideways once. The Sportec tires gave great feed back, were easy to transition for s-turns and always remained grippy.

Jacket: Alpinestars Athem jacket with a Kawasaki armored, waterproof jacket over it

Jacket: Alpinestars Atem Jacket Red/White (with a sweater tucked underneath, it was cold damn it)