Moto Camping – It's Worth Looking For a Room With a View 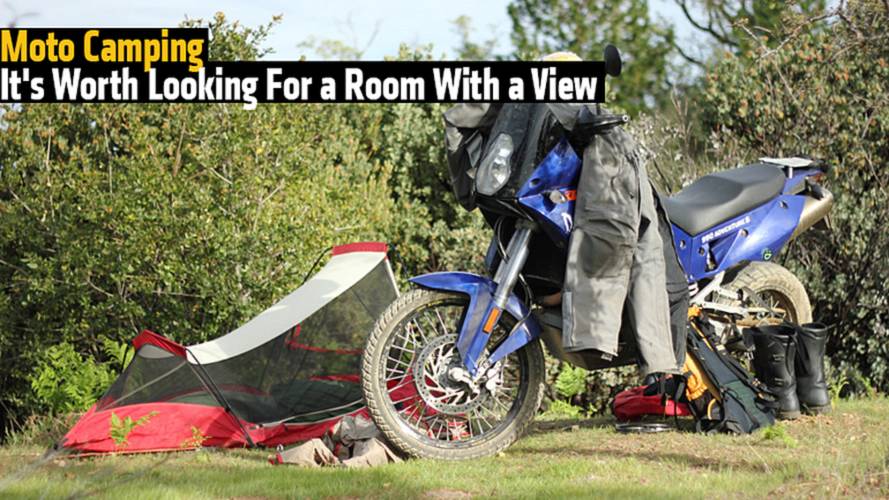 Moto Camping – It's Worth Looking For a Room With a ViewThe other weekend, I decided to venture out and explore some of the wonders of California. As...

The other weekend, I decided to venture out and explore some of the wonders of California. As someone that lives in the Mission District of San Francisco, I often times feel a bit claustrophobic and overwhelmed by the number of people, scents, and scenes that I have to deal with on a day-to-day basis. From time to time, it's necessary to get out and see something truly beautiful. For the past year or so the method of choice for this has been the KTM Adventure 990 S. It's such an amazing machine. If you want to go see any part of the state without having to tow a full on dirt bike then this is the bike. Anyway, enough about the machine itself, this is about THE RIDE!

Starting sometime a little before lunch, I moseyed over to the bistro next door to have breakfast and plan a solid route that would get me out of this place so many have decided to call home. As countless riders have done before, I sat there drinking my coffee asking myself, "Do I go the western route, or the eastern route? How much dirt can I find between here and there? How can I stay off that damned highway?" Some caffeine and a breakfast burrito later, I had settled on a easterly out with a westerly back. I quickly gathered my things and went through the usual system check before beginning my ride down the super fast HWY 101 to Gilroy where the even faster 25 awaited. Once down near Pinnacles, there is an excellent dirt route known as La Gloria Rd. that will take you back over to the 101 near Soledad.

La Gloria is a beautiful road that starts off with a pretty quick section that rarely has too much traffic on it. There's a spectacular tree just before the windy section that takes you down the mountain and into Soledad. I highly recommend stopping there for a quick safety check and a moment to soak it all in.

Admittedly, the next section on the 101 was by far the most boring bit of the trip. Cruising along, I watched the people drift along in their cars while fiddling with their phones and swaying from lane to lane—I tried to avoid getting anywhere near them. I hate these major highway stretches. Suddenly, the exit for Jolon Road popped up (finally, a break from this monotony.) Following that through to Fort Hunter Leggitt, I stopped by the beautiful Mission San Antonio de Padua.

This mission was built sometime back in 1771 and it's still a beautiful site to behold. They are doing some reconstruction on it, however, so some sections are covered by scaffolding or not accessible. Either way, it was still a great pitstop before the madness of Naciemento-Fergusson Rd.

It's been said that Naciemento-Fergusson road is not a "safe" road. I, however, find it quite an excellent one to travel. The single lane on a windy mountainside sprinkled with majestic views of enormous valleys beckons to be ridden. Every now and then you just have to stop and appreciate the shear immensity of it all. Luckily, there are occasional turnouts to do just that.

I ran across a few other adventure bike riders there and they looked to be enjoying the twisty, scenic gem as much as I. There was also one pillion rider sitting back and oodling over the views.

As I reached the top of the hill, I finally saw the road I'd been waiting for, the Coastal Ridge Rd. Now I don't know if you've ever been down this way, but if you are ever in the mood for a nice spot to camp for an evening and don't mind getting a little dirty to get there, then this is the place for you. All along the Coastal Ridge Road there are "dispersed campgrounds" with huge open views of the Pacific. The road can be a bit rutted and it is very small so...yeah. It is something else though.

As you follow this road back about 4-5 miles you'll come to a Y in the road; take the upper road to the right and you'll end up at Prewitt Ridge Campground. This campground is very primitive and has no amenities for the types of people that need that. There are quite a few spots to camp and it's a first come first server setup. I road along trying to find just the perfect spot and eventually settled for a site that I'm fairly certain wasn't a spot in the traditional sense, but it suited my needs. I stripped off the gear and set up camp for the night.

My timing had been perfect. There was plenty of time to hike around and find the opportune spot to catch the sunset. I walked down the hill toward the final campgrounds and stumbled across a blockaded spot that turned out to be a private parcel. The owner of the land was nice enough to let me sit through the sunset before I had to return to my campsite. I'm rather grateful for that as it was a beautiful sight.

In the morning, I awoke to an equally impressive sunrise that would've been much more exciting if I'd stayed in one of the campgrounds right on the ridge where I can see both. I did, however, get a shot or two in of it.

I have to say that the most amazing thing about getting up on a beautiful Sunday around sunrise and tearing down camp is that you get to enjoy the splendors of scenic HWY 1 with the least traffic you'll ever see. It's hard to put in words how amazing riding on this road feels when you can flow from corner to corner unimpeded by the ever present Prius, minivan, or RV.

The ride back consisted of HWY 1 until Santa Cruz. From there I opted for the HWY 9 route through Ben Lemond. Unfortunately, the 9 was closed due to a mud slid,  but a quick detour on the 17 was simple enough. If you ever get the chance to go through Ben Lemond and you enjoy cooking, brewing, or garden type of activities you should stop by Mountain Feed and Farm Supply. They've got some cool stuff and I picked up a little home brewing kit from them. The people there are super helpful and they've got it all. Shameless plug over.

As I approached the "Fog City," I started weaving through the gauntlet of cars, and passed by the same route I've always done after returning from a relaxing and liberating trip. I headed up the 101 to the 280, then off on the local streets and onto the surface streets of my neighborhood. It's then that I am abruptly hit by the ever present odeur de la mission (well, at least I know when I'm home.)

Until the next adventure, this is my life.