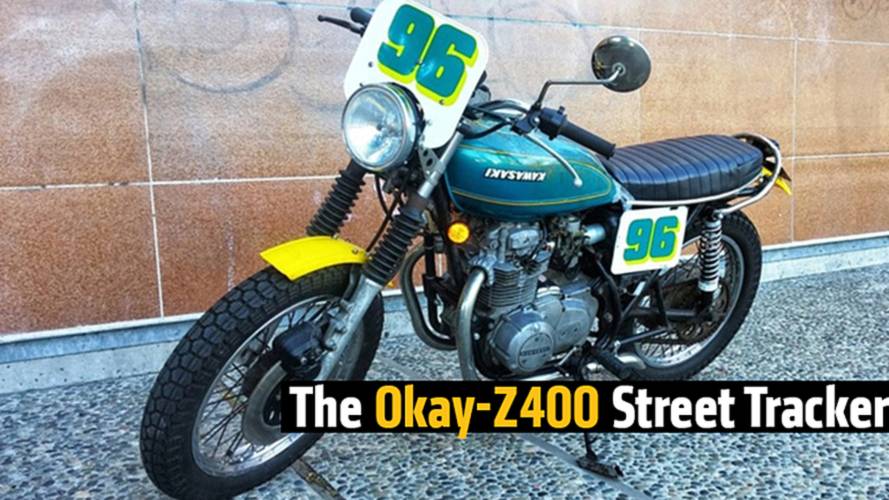 This all started innocently enough with my desire for a cheap and cheerful amateur dirt track bike. I wanted a Japanese parallel twin to run against old Triumphs, new Bonnevilles, and the other weirdness that shows up at hooligan class flat track racing and Hell on Wheels events. A friend who always has his ear to the ground found me this bike behind the second owners house in Burbank, where it was since at least 1989.

The single best part of this bike at this point (besides the come take it away price) was this sticker on the touring trunk.

After a couple hours of labor and some washing and waxing it actually didn’t look half bad.

I’m not going to detail the mistakes I made and how I recovered, but unlike a lot of custom bikes you see online, I’m going to show you the messy in between pictures. You can learn from my mistakes later.

Freeing the Motor and New Rings

When you have a bike that is seized, or locked up from sitting, many times it’s just a small amount of rust holding everything up. Just keep repeating that to yourself over and over, like saying the rosary, it might help.

After a good 24 hour oil soak, it still wouldn't budge with the kick starter. However, using the torque multiplication of the transmission and primary drive, this one only took about 15 minutes of rocking to break free.

Luckily the KZ400 top end comes apart with the motor in the frame, which makes things easy. A Harbor Freight hone job, some new stock size rings (eBay—from Canada for some reason), and new gaskets (eBay—Japan this time, which makes sense), and it was together again.

The next common challenge with old neglected bikes is cleaning the carburetors, and often times, replacing the rubber boots. Guys swear by ultrasonic cleaners and all sorts of chemicals, but there is no substitute for poking each hole with a proper jet/welding torch cleaner. In a pinch, a metal guitar string will do or a strand pulled out of an old wire brush.

The rubber intake boots for this are NLA—even eBay only had “good” used ones. Modern KZ1000 police bike parts, however, were similar, cheap, and widely available (thank you CHiPies!). I made an adapter plate to make up for the bolt hole mismatch and shorter length.

For air filters I went with Uni Filter foam pods. I mounted these on the exhaust pipe where the stock airbox used to be so they stay clean and can get plenty of air.

I’m not a loud pipes saves lives kind of guy, but I am a cheap bastard. Since this was to be a dirt tracker (in looks anyway), I just polished the stock head pipes and made them into TT pipes—similar to early off-road and desert racers.

I installed “cheese grater” style baffles and chrome downturn tips to knock the edge off the noise. Total cost? I’d be surprised if the exhaust has $25 worth of parts in it.

Fenders and Side Covers

The side covers are go-kart number plates with professionally printed numbers. I got lucky and the color matched the old faded factory paint, so it has a real back in the day dirt track look. The plates mount to the stock location, and factory side covers can be put on in seconds.

Yellow plastic universal dirt bike fenders came from former motorcyclist editor Brian Catterson during spring cleaning. The front mounts like the original, and the back uses pop rivets and aluminum scraps (I kept the stock inner fender). I rifle drilled big ass metric bolts (10mm?) to replace the turn signal stalks that used to hold the back one.

I recovered the original seat pan, cutting down the foam to make it as thin and flat as possible without modifying the frame. In some places there is nothing but 1/4“ of yoga mat between your ass and the pan.

Years ago I got a 1950s sewing machine for free from a friend, and this is about the 10th seat cover I’ve sewn using it.

The tail light is another popular eBay item with LED tail, brake and turn signal functions. Be sure to get the electronic blinker relay if you are switching to all LEDs. The cheap eBay ones work great, but only once you hook the hot wire to the right terminal (and they don’t come with instructions.)

Owning a MIG welder and brute strength, I fixed the grab rail to match the seat, slicing two inches out of the height. It really ought to be re-chromed now, but I haven’t gotten to it yet.

The rear shocks on it now really need help, but for now they hold the back end up and it’s rideable.

I stiffened the front by adding pre-load to the fork springs with a big nut under the fork cap as a spacer. A trip to 4 Wheel Parts, (the off-road truck parts chain) and I had a pair of heavy duty shock gaiters for $7.

The brake caliper was quite serviceable—once all the jelly was cleaned out. The master cylinder was shot, and early disc brakes have horrible hydraulic leverage ratios, so I used an 11mm piston master cylinder for a generic dirt bike. Now, the brakes have great feel and require little effort, even with 1976 pads still on it.

The headlight bucket/lens is a CB900 6.25” metal bucket by Emgo that uses a common halogen bulb. The orange side reflectors (also from eBay) are now LED turn signals (after tweaking the mounts to point them forward some.) Two of the front number plate mounting bolts are also LED blinkers.

One of the things that makes a flat tracker, street tracker, brat or scrambler what it is are chunky dirt ready tires. Luckily the Duro 308 is an exact duplicate of old Pirelli MT53 tires, which were popular on dirt tracks back in the day. The tires are the most expensive thing I bought for this project—about $100 for the pair.

So there you have it: one free bike + $500 worth of parts + 20 years of know-how + several months of weekends = a neat street tracker, and maybe a real race bike later this summer. Look for updates, and more projects from me later this year. - Woody