An Open Letter to Indian Motorcycles - Build a Scout Scrambler 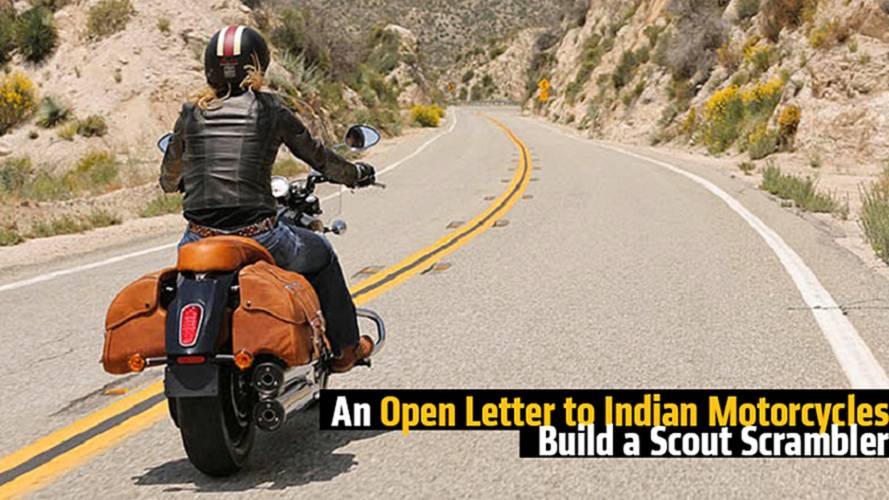 Let me ask you: Do you like money? Of course you do. Would you like to know how to make lots of it really easily, while at the same time ensuring your future and staying true to your brand values? Yeah, I thought so. OK, I have one word for you: scrambler.

I'll explain. First though, congratulations on doing so well. You've had almost as many faces as Doctor Who over the past 114 years, but with this face you're really knocking it out of the park. Your parent company, Polaris, recently reported that its motorcycle sales are up dramatically, and we all know that's because of you.

Yeah, you'll toe some company line about Victory and the Polaris Slingshot also being a part of that success, but come on. Victory's so lost in the woods at the moment it's been reduced to selling portable stereos (the Magnum X-1) and that Slingshot thing isn't even a motorcycle. This is all you, Indian, and everyone knows it.

To my mind, the two main things driving your success are: 1) you make good motorcycles; 2) you've been true to your heritage.

They really are good bikes, by the way. I live in Britain, where it's popular to complain about cruisers because they're not insanely fast. Speed isn't everything, though. I'll bet a Ford C-Max could outrun a Winnebago Sightseer in the quarter mile, but that doesn't necessarily mean the Ford is better. And as far as cruisers are concerned, yours are the best I've ever ridden. I got a chance to test ride an Indian Chief Classic not too long ago and I was impressed. Well balanced, smooth, easy handling, comfy, torque-tacular; I loved it.

I'll never get one, you understand, because that thing costs more than my annual net income. But who am I to begrudge you success?

And that's what I want to talk to you about: success. You're an American company and I'm American; and you're based in Minnesota, where I went to high school, so (until Texas gets a motorcycle company), I think of you as my hometown team. I want you to do well. And in that, I feel you're missing a trick by failing to respond to an incredibly popular trend in the market.

Next time you're setting up your displays at one of those big motorcycle shows, take the time to wander across the convention floor and visit the guys and gals at Ducati. Those folks have a long, proud tradition of getting people to pay stupid amounts of money for things.

One of their newest things, you're probably aware, is their Scrambler sub brand. Generally, I hate Ducatis. I crashed my buddy's 888 when I was 19 years old and my head is still ringing from the ass-kicking he gave me. I blame Ducati. Also, I don't trust desmodromic valves. But the sight of those Scrambler Ducatis makes me almost not care. They're just so cool.

MUST READ:  How to Buy From the Dealership and Not Get Screwed | RideApart

And, of course, Triumph has been in this game for almost a decade. The British brand uses its Bonneville as the base for a number of bikes -- Scrambler, Thruxton, Speedmaster, America -- and makes a whole lot of money in the process. Enough money that Ducati noticed; enough money that other manufacturers are falling over themselves to join in. Moto Guzzi offers a bolt-on scrambler kit for its V7 II. And there are very, very strong rumors that BMW will be releasing a scrambler either late this year or in early 2016, using the same air-cooled twin as the RnineT.

The scrambler, classic roadster, and (to a somewhat decreasing extent these days) cafe racer styles are very popular. Especially among young people, females, and other riders who have not grown up ingrained in motorcycling culture. These styles, none of which are currently a part of your line up, are a means of reaching a new audience. When priced right, they are a way to help ensure you'll be around for another 114 years, by drawing people into the brand.

I know what you're saying: "Just because Triumph, Ducati, Moto Guzzi, and BMW are doing something doesn't mean we have to. We don't want to just follow the pack."

Right. Because you've never done anything that someone else has done. You were totally the first one to manufacture a ginormous cruiser styled to look like it was built when black people weren't allowed to sit at the front of the bus. No one else had ever done that before...

Ah, but that's different because the 1940s/1950s aesthetic is your heritage, right?

So is the scrambler. In spirit, at least. I don't have to tell you about the Jackpine Gypsies -- the motorcycle club set up in 1936 by a bunch of Indian Motorcycle riders. The same club that started the Sturgis Rally 75 years ago. The Jackpine Gypsies were -- and still are -- all about off-road racing. And beyond them, Indian Scouts dominated flat track racing for decades. This stuff is in your blood.

I don't want to go all Emporer Palpatine on you here, but: Fulfill your destiny, yo.

You've got the perfect platform for doing so sitting right in front of you: the new Scout you released last summer. By confining it to a cruiser application, the engine in that thing is being wasted.

You don't have to do anything radical. People don't expect modern scramblers to be true off-road machines. Most scramblers will never see more off-road action than the grass parking lot at Renaissance Festival. So, simply pull in the bike's rake, jack up the suspension, move the pegs back, then slap on some 60/40 (street/off road) tires. If you're feeling really committed, go steal a few Indy Pro-Ride snowmobile seats from the Polaris parts closet. Add a high exhaust and, kapow, you've got a scrambler.

Next, find a few sexy people. Film them riding down a dirt road on your Scout Scrambler, slap the video on Vimeo with an Avett Brothers soundtrack, and watch customers start throwing money at you.

Myself included. Please make it happen,