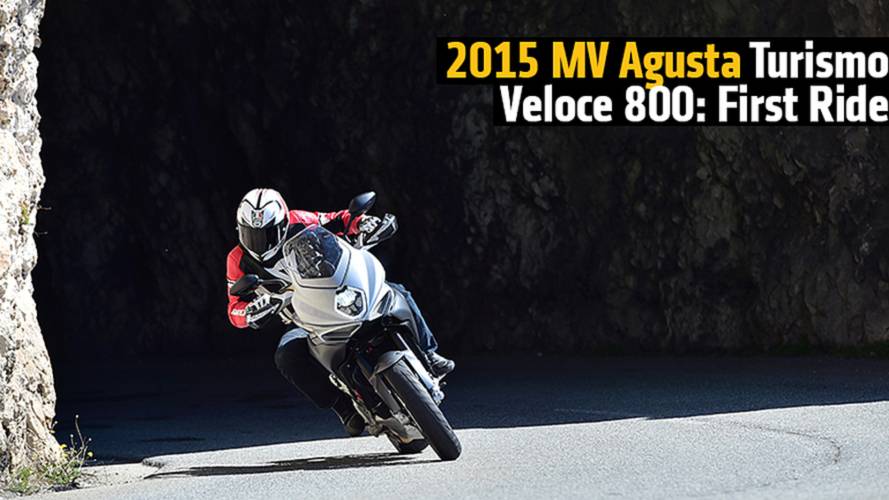 The exotic Italian racing brand tries its hand in the touring sector—armed with deep race track development knowledge—by producing a sport tourer loaded with evidence of this progression.

MUST READ:  Moto Camping – It's Worth Looking For a Room With a View | RideApart

MV Agusta has a long history of developing, building and fine-tuning motorcycles designed purely for top performance on the race track. For the last 70 years, the manufacturer out of Varese, Italy has only produced purpose-built race bikes and high-end, exotic sportbikes for street use. That is, until now. With the rise in popularity around the globe of sport/adventure/touring bikes such as the BMW R1200GS and the new Kawasaki Versys, MV Agusta decided to make a bold move and take a crack at this market. Introducing the all-new MV Agusta Turismo Veloce 800.

The new sport touring bike by MV Agusta rides like no other model in the manufacturer’s product line. We were able to put this notion to the test as we ran the bike through its paces on tight mountain roads charging up the French Alps, negotiating rush hour traffic in downtown Nice, and tearing through the high speed corners of the rolling countryside inland of the French Riviera. We rode in a pack of roughly 10 journalists led by MV Agusta executives who could definitely ride hard and had no problem ripping the MV through the country roads. What would normally be the ideal environment for a Brutale 1090 or F3 800, the Turismo Veloce held a very sporty pace over the 200 mile ride.

Weighing in at just over 420 lbs dry, this bike is surprisingly light given all of the gear and tech equipment included in the package. The wheelbase is also four inches shorter than the competition. This puts the Turismo Veloce as the lightest in its class by 55 to 110 lbs! This figure is comparable to modern-day 600cc sportbikes, but given the much higher center of gravity, this does not feel like a particularly light motorcycle when negotiating crawling speeds. However, when the pace is elevated, the bike handles very well and doesn’t loaf around at high speeds in uneven corners through the countryside thanks to this lean figure. The higher center of gravity proved to be a challenge for some of the shorter test riders with the seat 33.5 inches off of the ground (this 5’ 10” journalist could just barely flat-foot both feet on the ground). Though skeptical of the fun factor at first, the overall package ate this ride alive.

The 800cc 3-cylinder powerplant seems very reminiscent of the motor in the F3 800, but the Turismo Veloce shares very few parts with other models. Minimal carry-over parts include the case covers and crank shaft, but the block, pistons, con rods, cams, etc. are all specifically engineered for the Turismo Veloce. The result is an engine putting down 110HP at 10k RPM and 61 ft lbs at 8k RPM. The new engine design also allows 90 percent of this torque figure to be delivered between 3.5 and 10.3k RPM making for excellent dig throughout a wide range of revs. However, the motor runs a bit rough both audibly and vibration-wise below 4k RPM. Even start up time takes a few extra cranks regardless of engine or outside air temperature.

This power is modulated by a fly-by-wire throttle unit and hydraulic clutch system, both of which operate VERY smoothly unlike others we’ve tested. This power is then channeled through a 6-speed gearbox also designed specifically for the Turismo Veloce’s duties. First gear is a bit tall and requires some extra clutch slippage but shifting is very smooth and precise. Overall, raw power delivery is very linear and without an abrupt, punchy powerband that makes up the aggressive power curve of other MV bikes like the F3 and F4. After all, this wouldn’t be a true MV Agusta without a rough-running yet grunty engine…CONTINUE READING

The chassis is constructed from a traditional tubular trellis steel frame cradling the engine along with a cast aluminum alloy subframe and swingarm. MV Agusta swears by this trellis frame design claiming the structure allows for more strength and rider feel despite many top manufacturers going with cast aluminum. The wheels are suspended from the chassis with Marzocchi 43mm forks up front and a Sachs shock in the rear. Rebound, damping and preload are all adjustable front and rear with rear preload adjustable on the fly through an external knob located near the rider’s right boot. This feature came in handy when we started hitting higher speeds through the rolling countryside. Overall, the suspension held up relatively well given the wide range of riding conditions, though the front end was a bit on the soft side.

The Turismo Veloce is loaded with technology adapted from MV’s racing R&D allowing the bike to definitely excel in this department. The most useful feature on our aggressive ride through the mountains was the Bosch ABS specifically designed for this model. Intervention was very smooth—it hardly upset the bike entering corners extra hot and saved our ass on multiple occasions! The system will even regulate rear wheel lift when front wheel traction is not an issue, but this was a situation we tried to avoid. The traction control system was even smoother and less noticeable when regulating rear wheel spin based on wheel speed delta and lean angle.

All systems are controllable through the vibrant 5” TFT display easily visible in bright sunlight as it is the same technology used for most smartphone screens today. Aside from the basics such as a tachometer, speedometer, gear position indicator and fuel level gauge (a first for MV Agusta), information on all the electronic systems on board is available by toggling through the menus via left and right hand controls. Preset maps included are “Turismo,” “Sport” and “Rain,” but a “Custom” map can also be selected to set specific traction control levels, throttle sensitivity, maximum torque output, engine braking, RPM limiter and even engine response emulating a heavy or lightened flywheel. When the rider’s phone is paired with the bike via Bluetooth, incoming phone calls and messages are displayed on the screen as well. Just below the display are two USB charging ports, which we used to keep our cell phone charged while riding.

On the luxury “Lusso” model, suspension settings can be instantly adjusted electronically through the display or even with your phone or tablet if within range of Bluetooth. The Lusso version is also equipped with GPS “Skyhook” connectivity allowing for riding routes to be tracked, downloaded and shared with other riders. Finally, the Lusso model offers heated hand grips for colder days, a feature we did NOT find a need for on our 75 degree Fahrenheit spring ride through the French countryside.

Another unique feature for a sport touring bike adapted from MV racing is the quick shifter unit. The system allows for clutchless shifting up AND down (with auto-throttle blipping) as long as the bike is traveling over 20 KPH (or 12.4 MPH). The downshifting feature works extremely well enabling the rider to simply bang down on the shift lever, and entering corners hard on the brakes with the throttle shut and clutch untouched. However, upshifting requires extra force resulting in periodic mis-shifts and a painful left toe at the end of a ride. The persistence of this issue is surprising given its presence when testing the F3 and F4 years ago.

Riding the Turismo Veloce was a much more comfortable sensation than most of the other MV Agusta models. An upright riding position with raised and wide dirt-style bars on top of a plush leather seat made the all-day ride no problem at all. Filtering through busy downtown traffic was also relatively painless even with the full luggage bags mounted in the rear. This is because the total width of the luggage bags is actually narrower than that of the handle bars. However, this is not due to a lack of storage space. Each luggage bag is capable of carrying a full-face helmet. Once we got up to the wide open roads in the free-flowing countryside, the adjustable windscreen came in handy with height modulated with only the rider’s left hand when in motion.

Though the sport touring category may not be MV Agusta’s bread and butter nor is it a market in which it has much experience at all, the all-new Turismo Veloce 800 holds its own. The bike is loaded with plenty of advanced electronics, rider-aids and features derived from the company’s extensive road racing background. Proprietary systems such as the ABS, traction control and quick shifter all work very well for this application. The motor is powerful, yet seems a bit unrefined as evident by running a bit on the rough side in lower RPMs in true MV Agusta fashion. Overall, this is quite an impressive debut sport touring model for a company’s initial dive into the segment. Regardless, with its extensive racing heritage, MV Agusta’s final product has quite a few unique advantages over the established competition with the Turismo Veloce 800 now on the streets.

What Is It With Revving Your Engine At A Stop?
The Pros And Cons Of Motorcycle Commuting
This 1974 Husqvarna 250 Magnesium Is Still Ready To Race
The New Bimota KB4 Spotted Out In The Wild
Indian Pursuit And Guardian Trademarked In the U.S.

What Is It With Revving Your Engine At A Stop?
The Pros And Cons Of Motorcycle Commuting
This 1974 Husqvarna 250 Magnesium Is Still Ready To Race
The New Bimota KB4 Spotted Out In The Wild
Indian Pursuit And Guardian Trademarked In the U.S.