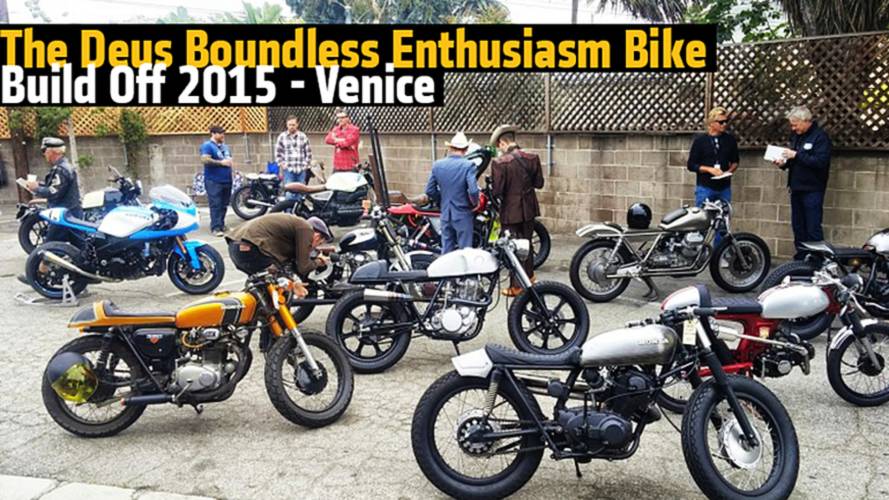 We visit the deus ex machina bike build off 2015.

I entered a custom bike in the Deus Boundless Enthusiasm Bike Build Off 2015. A custom bike show that takes place at all of Deus Custom's six locations across the globe. Instead of producing the safe bet, you know, a cafe racer with no racing history, bare metal, pipe wrap and Firestone tires, I went a different way. I brought a pair of chopsticks to a knife fight.

Unlike a lot of bike contests, rule #1 at Deus is: Making the most with the least. The other four rules basically say it has to run, be rideable, display creativity and ingenuity.

Because of rule #1, several really nice bikes were eliminated right off the bat because they either started with too nice of a bike as source material, or had obviously taken a money-is-no-object approach. I believe this CNC machined aluminum frame, Ohlins suspended, titanium 6 into 6 pipe wearing Honda CBX was the latter.

Then there were the expected assortment of aforementioned "cafe racers," bobbers, street trackers and scramblers.

It was refreshing to see a few people not afraid to take bold chances with color in a sea of black rubber and bare metal. This BMW boxer (with a hand carved hardwood seat) and Honda dual sport 650 (inspired by a childhood at the beaches of South Florida) really stood out.

A few more interesting bikes included this Burning Man refuge, low slung, feet forward post-apocalypse scooter (originally a Yamaha Vino 125), which had texture to spare and was ridden to the show.

There was also this sweet, ex-motocross Yamaha YZ125 2-stroke that's now a full on road racer. That may sound odd, but MX-road race has been a popular formula for cheap track bikes since at least the 1970s when Honda released a bunch of Elsinore 125 bikes dubbed the MT125R—with full road race gear for club racers.

CONTINUE READING FOR JUDGES AND WINNERS…

Amongst the judges were the winners from the last Boundless Enthusiasm Build Off in 2013, the nattily dressed guys from Bixby Moto of Long Beach, and Woolly, who is the man behind all of the Deus Venice custom bikes.

I would estimate there were about three dozen bikes there, the top five of which will go online into a worldwide popularity contest against the top five bikes from the other Deus Ex Machina locations in Europe and Asia.

Special Honor: For building a cool bike, but not following rule #1 - The retro-modern Suzuki 1000

One of these 3 Honda CX500 cafe racers. Can you guess which one won?

I have an irrational hatred for these bikes, so they all look awful to me, but I guess the least awful was this one.

I've been avoiding talking too much about the bike I built, the bosozoku CM400 just because I'll do a write up on it at a later date. But in brief, while outlaws were terrorizing the countryside on choppers in America, in Japan the bikers rode a mash up of European cafe racers and American choppers. These "running out of control tribes" were called bosozoku.