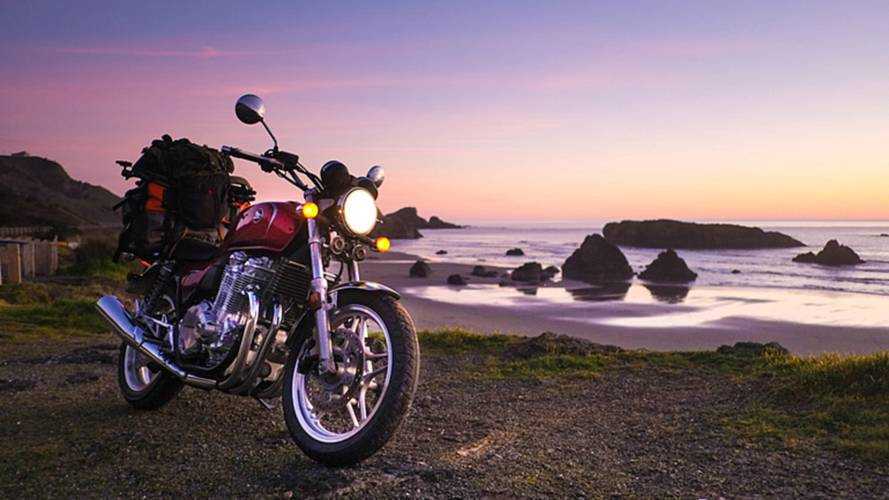 On the first day of The One Motorcycle show, I had managed to lose my iPhone and unfortunately no one had the good nature to return it.  Knowing I would be on the road by myself, I opted to pay $15 at the AT&T store and get an old school flip phone in case anything went wrong on the road home.

When leaving Portland, it was my plan to head due west and proceed south down the coast along the 101, but unfortunately the cold was too much to bear based on my current attire and ride setup. I bombed down I-5 and cut over to the 101 via 126. It was the same route as my trip north. I figured the quicker I could get south, the warmer and more tolerable the ride would become—I was partially correct. I found myself stopping often to warm up my hands and get my blood flowing.

MUST READ:  Los Angeles to Portland and Back on the CB1100 DLX – Part One | RideApart

Took a break to warm my hands and these ninja cows snuck up on me. I nearly had a heart attack.

Highway 126 winds in and through a number of small towns before connecting to Interstate 101. Perhaps the most breathtaking portion is a 60 mile stretch along the Siuslaw River where moss draped trees line the highway—creating a dense forest landscape peppered along surrounding a mountain on either side. One particular and favorite landmark was an abandoned rail car on a decommissioned train track just beside the highway.

OR 126 along the Siuslaw River

Abandoned rail car along OR 126

Once back on interstate 101, the dense forest landscape gives way to the encroaching coastal climate. With forest and river systems on one side of the highway and sand dunes on the other, Oregonians are blessed to have an amazing national park for off-road recreation.

On my trip north, I could see these dunes from the highway and could clearly make out tracks left by side-by-sides, ATV’s, and dirt-bikes. As I was ahead of schedule on my trip south, I took it upon myself to turn off the highway to explore the Oregon Dunes National Recreation Area.

With the Honda CB1100 DLX loaded down with camping gear and road tires, I can definitively say that this bike is not exactly built for traversing sand dunes. So the majority of my exploration was relegated to the paved road, but I won’t say I didn’t take my hand at hitting one of the sand paths close to the road. Even loaded down with gear, the CB1100 handled the sand well. I’m most proud of the fact that I didn't dump the CB or get stuck. After just a bit of fun, I got back on the road that led back to the highway and proceeded south.

The rest of the day was filled with beautiful coastal views. About an hour before sunset, I began keeping an eye out as to where I could camp. I came around the bend at Cape Sebastian and knew this would be the place to camp for the evening. I managed to pull the CB onto one of the coastal cliffs and waited for the sun to set before pitching camp. Of all the places I chose to stay during this trip, this location was hands down my favorite due to the sheer magnificence of the view.

I awoke to the crashing sounds of the waves and the increase of car traffic on the highway. I prepared my morning breakfast on the cliff side with my feet dangling below (no one can ever tell me that this is a bad way to live.) With my body fueled for the day, I began to break down my camp and load up the bike when an older man pulled into the turnoff boarding the cliff. He hopped out of the car with an orange in one hand and can of V8 in the other. He then proceeded to walk over to me.

“Hey! Are you European?” He asked.

Enjoying the sunset at Cape Sebastian

“Oh, wow,” he said with a surprised tone. “I only assumed because so many Europeans take these motorcycle trips up and down the coast. My wife and I are actually from Los Angeles too and we are driving down from Portland.”

“That’s where I am coming from so it looks like we’re going to be racing one another down the coast,” I said jokingly.

Beauty shot of the CB1100 DLX. What a good machine

“It appears we might,” the man said with a smile on his face. “Well, I wanted to offer you this snack for your ride. You’re doing something I have always wanted to do but never got around to doing. Now that I am older, I’ve taken more to car road trips instead. It’s inspiring to see a young man such as yourself on such a journey. I wish you safe travels.”

Raw and dirty shot of camp at Cape Sebastian

I thought the man to be very kind and accepted the V8 and orange. We exchanged names and shook hands before going our separate ways.

It was 9am and the road was calling. I figured if I could average a good 70 mph, I could be in Eureka, CA by noon for lunch at the Black Lightning Motorcycle Café (that delicious breakfast sandwich was calling my name.) The ride to Eureka from Cape Sebastian was cold and miserable, but the thought of hot coffee and food has a way of pushing a man through almost anything.

I arrived at BLM around 1pm and was once again greeted by Sarah. Before sitting down to some food and drink, I commandeered almost every outlet on the north side of the café to charge numerous battery driven devices. With a strange level of luck, in walked Jeff and Cassandra. Back from their trip down south, they had brought in their two kids into the café. Jeff noticed I was sitting at the bar and walked up to say hello. He also introduced me to his kids, Teagen and Calli, just before I dove head first into my breakfast sandwich and coffee.

The stunning starscape outside my tent at Cape Sebastian.

Jeff had told his daughter Callie that I was a photographer, and being the precocious 16 year old she is, she sat down next to me and began asking me some questions and showing me some of her most recent work. I was happy to oblige. Our conversation touched on numerous facets of photography; everything from film versus digital, social media photography, how to manage workflow to backing up files, camera gear, internships, travel, and even philosophy. Then, our conversation steered towards motorcycles, of course.

Before I knew it, almost two hours had passed. I was stunned. All I can say is keep an eye on this young woman; she might take over the world some day. I hope she does it with a camera in her hand.

Next stop: Highway 1. I was looking forward to this portion of my trip the most because it's the point where the 101 and 1 split in Northern California. It's heralded as one of the best riding roads in the state due to the 20 miles of pristine two-lane highway surrounded by redwoods. I was finally going to be able to put the CB 1100 DLX to the test.

The Hesseltine family. Owners of the Black Lightning Motorcycle Cafe

About two miles after the break, I came to stop light in the middle of the woods with a Caltrans work crew performing some routine maintenance. Between the work crew and myself, there was a Harley bagger riding two-up. I thought to myself, “Damnit! I am about to get stuck behind this bagger for the next 26 miles.”

The Caltrans workers waved us on and the Bagger took off. BRAAAAAAAP!!

“Holy shit! This old man is going for it, he’s running the canyon two-up!” I said to myself.

That’s exactly what he did and I gave in to the hot pursuit. First, second, third gear, hard brake, downshift, lean in, see the line, and power out—repeat over and over again...YAHOOOO!!!!!!

The CB 1100 DLX was simply fantastic the whole way. I was having so much fun I almost forgot I had a bunch of gear strapped to the back of the bike.

Sparks were flying off both our pegs around every other corner and the roar of each engine could be heard powering out of each turn. The road was entirely ours, not another single soul for the entire 26-mile stretch. This old man was a seasoned rider and at one point, around 10 miles in, he waved me on to pass but I declined. I had never ridden this road before and clearly he had, so I opted to continue following his lead. By the time the road straightened out and revealed the coast, the man on the Harley pulled over at the first turn off / outlook and I pulled up right beside him. I dropped my kickstand, took off my helmet and looked over at him.

“Dude! Wow! I thought I was going to be stuck behind you for a leisurely stroll through the woods. Boy, was I mistaken way to push it”

He was grinning ear to ear and the young woman, who was sitting pillion, had the exact cheesy grin on here face too. After exchanging names and pleasantries, I would learn that the woman on the back of the bike was the old man’s daughter. Both were enjoying a long weekend exploring Northern California by motorcycle.

As the adrenaline for the redwood race subsided, I found myself in lovely Mendocino County. Unfortunately, the population density began to increase the further south I went. I was becoming worried that I would not simply be able to just pull off the side of the road and post camp. My anxiety was become more intense as daylight slowly gave way to darkness. Luckily for me, 10 minutes before dusk, I was able to find a little cut out near a Bed and Breakfast to pitch camp. I made dinner, read a little under flashlight and went to sleep.

Stay tuned for the final leg of the journey. Part Three is coming soon.