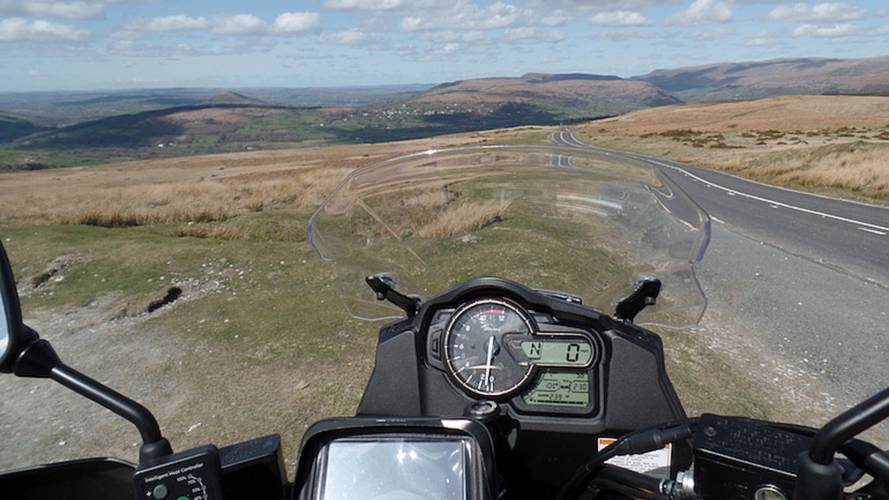 Why There's No Shame in Owning an ADV and Never Taking it Off RoadAlmost exactly a year ago, RideApart declared the ADV motorcycle as the two-wheeled...

Almost exactly a year ago, RideApart declared the ADV motorcycle as the two-wheeled equivalent of an SUV. The comparison wasn't necessarily meant to be flattering.

The term SUV, after all, has become something of a dirty word. Even for people who drive them. My brother drives a Chevrolet Suburban and refers to it as the "Douche Wagon." And in the sense that the bulk of SUVs are rarely taken off road, the author of the article linked above saw a parallel.

"(T)he truth is, the harshest terrain these bikes will ever see is the pothole-filled street on the way to the drugstore," wrote Andrew Chen.

At the time, I agreed with the comparison. Then, displaying my classic propensity for saying things that bite me later on, I declared ADV bikes to be "dog-ass ugly."

Actually, no. I'll stand by my statement that ADV bikes are ugly. Or, at the very least, not exciting to look at. The BMW R1200GS is so unfettered in its ugliness it is almost respectably visceral, but other bikes? Meh. KTMs make me think of Buck Rogers in the 25th Century. Triumph's ADV offerings look as if they are made of Lego. And my own beloved V-Strom reminds me of a stupid animal.

No ADV has the hide-it-from-your-grandma sexiness of a Moto Guzzi Griso, for example. Nor even the Coca-Cola charm of a Triumph Thruxton. They are not bikes for staring at. Sorority girls don't run up and ask to have their picture taken next to one.

Nope. I have no interest in doing this.

And, well, come to think of it, I still agree with the idea of an ADV being similar to an SUV in that many ADV owners –– myself included –– have no intention of taking our off-road-styled bikes off road. But here's the thing I should have realized and said a year ago: That's OK.

I don't mean "OK" in a disappointed way, like, "Tommy, your mother and I paid your way through law school, but if you want to work as a drag queen in Omaha, well, OK."

I mean "OK" in the same sense that it is OK to eat a burger at Chili's, even though the word "chili" is totally in the restaurant's name.

And that's a good point. Increasingly, manufacturers are building ADV bikes that are deliberately designed to stay on pavement. Think of the Ducati Multistrada, the Yamaha FJ-09 (aka MT-09 Tracer), or the forthcoming BMW S1000XR. Because off-road ability is not what has fuelled the ADV boom. Instead, it's the fact that an ADV delivers so many things at once. Let's take my V-Strom as an example.

The V-Strom is, of course, named after Strom Thurmond, the longtime South Carolina senator who argued in favor of racial segregation, then turned out to have fathered a black child.

No, I'm kidding. The "V" in V-Strom is simply a reference to the bike's V-twin engine. Meanwhile, "strom" is the German word for "stream" or "flow." In classic Japanese style, Suzuki blatantly chose a German name in hopes of creating a mental link to BMW's GS series. The BMW R1200GS in particular has some to define the ADV class. There's no way you could claim the V-Strom 1000 is as good as its BMW inspiration, but it is a hell of a lot cheaper and it's still very good.

Firstly, it is comfortable. That is especially true for me, at 6 foot 1. I realize the tallness of an ADV may be frustrating if you're a little short of leg, but since all the other bikes are seemingly made for you, as well as all the damned riding gear, I kind of don't feel bad. Also, a number of ADVs have lower seat options, which should allow you to join the fun.

The V-Strom's comfort is an all-day sort. Combine this with the fact it is rock solid at spirited freeway speeds and it can serve as a long-distance tourer. Indeed, I'm planning on riding mine to Italy this summer (I live in the United Kingdom).

Between Italy and me, however, are the Alps. Ever heard of the Stelvio Pass? In the Alps. Yes, I'm sure that Tony Carbajal guy could tear through Alpine roads on a Victory Cross Country, but as a mere mortal I prefer something a little easier to handle, a little more flickable.

My V-Strom performs incredibly well on twisting roads, thanks in no small part to its torque-alicious engine and fully adjustable suspension. Higher-end ADVs offer electronic suspensions and put out a little more horsepower, but the V-Strom is no slouch.

So, the V-Strom is a tourer and a sport tourer, and when things are relaxed its V-twin reminds me of all I enjoy about cruisers. Plus, it can be taken off road. (Look up Bike magazine's series in which they rode a V-Strom from England to Japan).

Keep in mind, too, that the V-Strom is toward the basic end of the scale. Despite this, it, like most ADVs, offers more useful bits than you tend to find on equally priced bikes of a different class. Traction control, ABS, ridiculous amounts of dashboard information, and a 12v outlet are all pretty standard features in the ADV class. Heated grips and cruise control are fast becoming de rigueur, as well.

An ADV is an all-in-one –– a Leatherman of motorcycles –– and it tends to deliver more bells and whistles for the money.

So, if an ADV is the SUV of motorcycles it is only because, as was the case for SUVs at the height of their popularity, it offers features and a collective experience that simply isn't available in another class. Perhaps other bikes can perform certain tasks better, but neither my garage nor my wallet are big enough to maintain an activity-specific fleet of motorcycles.

I still wish it were prettier, but I'm willing to overlook aesthetics for the sake of having a bike that is everything I need. And even a few things I don't. I'll see you on the road.