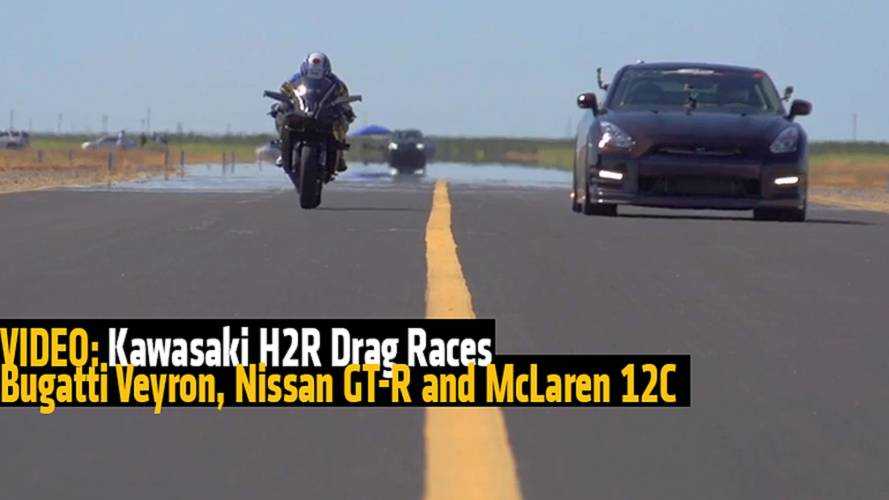 For the first time ever, the highly-anticipated 2015 Kawasaki H2R is finally able to prove itself on the drag strip against the fastest and most expensive supercars on the market today.

MUST READ:  Will the 300hp Kawasaki H2R Be a Success? | RideApart

is the highest-performance production motorcycle ever offered to the public by any manufacturer.

Sport Rider Magazine convinced Kawasaki to bring the first H2R model in the US, to an airstrip in central California (Minter Field in Shafter, CA) to prove its mind-boggling stats (such as 300HP pumped out of a 524lb package) as it goes up against some of the fastest supercars on the planet. Some of these 4-wheeled exotics are worth nearly 25 times more than the “expensive” H2R further validating the Kawi’s bang-for-the-buck factor. For example, the Bugatti Veyron base model tested had a $1.2 million price tag before the extensive “Super Sport” tuning began…

and hosted by Omega Motorsports at airstrip top speed event where high-end supercars from all across the land meet to prove the validity of the excessively-high figures at the top of the speedometers.

who has been in the saddle, proving claims by manufacturers that they have produced the world’s fastest/most powerful/highest performing bikes for decades. The drag racing format was two vehicles running side-by-side, 50 MPH rolling start and ½ mile of open tarmac.

MUST READ:  The Future of the Kawasaki Ninja H2 and H2R | RideApart

Only the fully-built GT-R was able to pull ahead of the H2R by the finish line. However, this was Kent’s first time on board of the bike (aside from a quick ride on the H2), and as evident in the videos above, launching the bike then wrestling the front wheel to the ground is apparently quite the delicate task.

Also, after studying the video footage and talking with a few people behind the scenes at the event, the H2R hit an indicated 206 MPH at just under 14,000 RPM. This leads us to believe that the bike could easily hit 220 MPH before reaching the engine’s redline under ideal conditions.