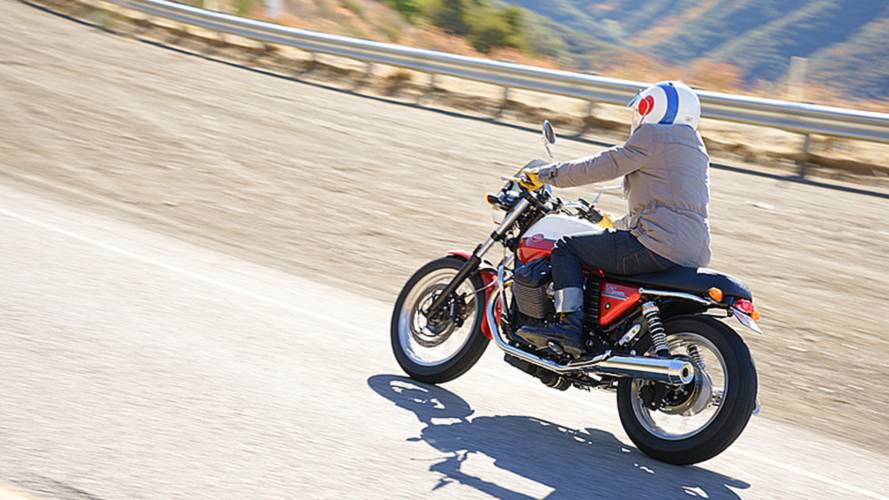 I bought this 2013 Moto Guzzi V7 Special—say "spe-see-ah-lé," Italian flair on the e and everything—almost exactly a year ago this month. It was, and remains, the first vehicle I bought new. Delivered with five miles on the clock. All maintenance, maintained. Starts every time with a lovely little burble. Why wouldn't it? Even has a warranty. What's that like? (We don't need no steenkin' warranties.) For years, my notion of reliable motorcycling was a 1976 Honda CB550F lovingly mangled by my own hand. This obscure Italian motorcycle, built by closet Commies in George Clooney's backyard, has been the most reliable motor vehicle I have ever owned. I dubbed it the Moto Gutsy.

"Riding a motorcycle around the Monterey Peninsula on Pebble Beach week is like having a VIP pass at all times," I mentioned last August when I rode fourteen hours straight on my Italian martini shaker before engaging in a week of two-wheeled debauchery through the proverbial gilded gates of the Monterey Peninsula.

But riding a motorcycle to work, day in and day out in Los Angeles, is punching in a real-life cheat code. Riding in Los Angeles takes you neatly out of that vein of Southern California urban life that grinds everyone down into a screaming rage, on a daily basis, and plucks you into a realm where promises are kept and time/distance ratios make sense. In a car, I find myself angry, foaming at the mouth. On a motorcycle, I'm at war against the unyielding tide of traffic—but it's a war that I win with every safe arrival, attentive and adrenaline-filled, exhausted, triumphant.

Six miles there, six miles back. This Included the Pebble Beach journey where I put 1,000 miles on the odometer, thereby doubling it—I've ticked over 4,000 miles. ("Hey, still a year left on the warranty," I tell myself sometimes.)

It, and myself, have grown comfortable with each other. When I first started riding to work I lane-split through stopped intersections like a skittish bird first raising its wings: I nervously steer and angle the motorcycle past mirrors and door handles, past buses and the jagged metal edges of box trucks. Alarms ringing, voices angered, if I tap any of them. An obstacle course, at eye level. Get to the front, sit in the crosswalk, watch for glaring pedestrians, wait for the light to turn green. The only reason motorcyclists get away with this—and the drivers around us know this, too—is because we tell ourselves that this is all worth us risking our lives.

So far I've completed the 600-mile service, half of which was completed at the original dealership where a newly hired technician had just put the motorcycle on a lift. As I was watching, he had just changed the shaft-drive fluid when he went to rev the engine, forgetting that it was still in gear. The rear tire hooked up, spun a metal plate ten feet out the back of the scissor lift, and fell through, leaving pencil tip-sized nicks in the black powder coated hub, all in the span of four seconds.

"Uh," I spoke up, wondering if he still had a plan, "shouldn't you wipe away the oil that's spilling out?"

"That's not a priority right now," he snapped.

Later, I found him applying a Sharpie to the parts that had been scratched. "I hope I can still earn your business," he apologized.

The dealership gave me a refund. They offered to have the rear hub repainted too, but I said the same thing—that's not a priority right now.

When I left my last job, basking in the warming glow of gainful funemployment, I found myself going on a lot of long, meditative motorcycle rides. They usually took me, and I usually took the Moto Guzzi, out to the Pacific Coast Highway, along the sweeping turns against the ocean, past the throngs of tourists in Santa Monica, past the Valley commuters short-cutting it through Topanga Canyon. I didn't know where else to go. The Guzzi roared and pulsed underneath me. I gripped the throttle and turned it up and the roar became guttural, like a wild horse kicked into liveliness, snarling and willing—a wild animal tamed by its owner and stroking its ego as a result. Filling his heart with joy, joy of machine…

Joy of machine. The machine that serves as a conduit to our hopes, dreams, values, and what we hold dear and true to ourselves: Motorcyclists like to portray themselves as lone wolves. Every single one the hero of his or her own existential movie, but we are all bound by a shiftless camaraderie, ever changing. Buoyed by the sound of every fast car, every fast motorcycle produces the sound of a voice whispered into your ear, at the peak of mechanical cacophony, seductively, dangerously—"You will never die."

And on cold calm nights in LA, I point the Moto Gutsy towards the 10 Freeway and lift off. Keep your head down where it's of no use to the wind, where you watch the needles swing to the right. Where the drool collects at the corners of your mouth and drip down to your jacket. Noise, wind, chaos. The lights bounce in patterns all around you, one machine adrift, among a sea of sharks. Keep the throttle pinned. You're almost home.