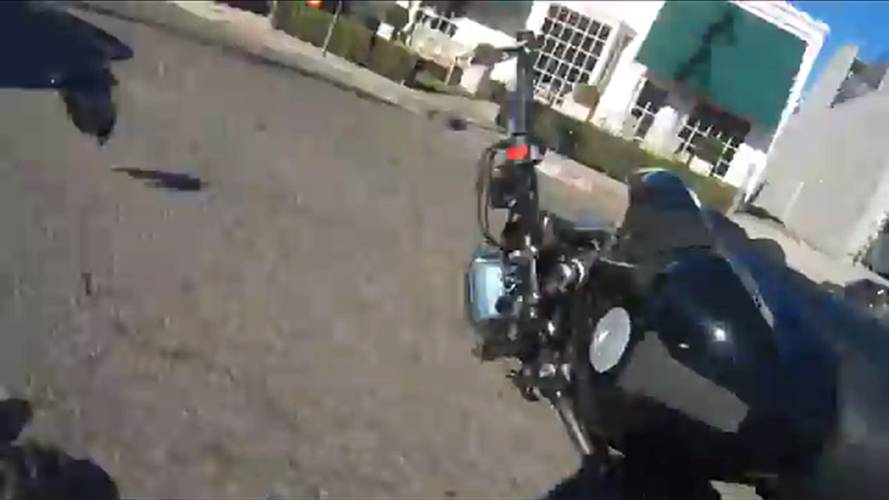 Texting is certainly a problem, watch as a motorcyclists tells a driver to stop texting. His response was to run down the motorcyclist, causing a crash.

When lane sharing in Los Angeles, you can usually spot the drivers texting. It's seemingly every 5th car, and they're typically slowly swerving back and forth and just generally not paying attention. RideApart reader, Samuel David Ayres, decided to inform a driver of the dangers in texting… sort of... and that driver didn't like that very much.

READ MORE:  What Body Parts Will You Most Likely Injure In A Motorcycle | RideApart

WARNING: For those watching the video in the office, watch out, there's a curse word in the opening few seconds.

READ MORE:  10 Common Motorcycle Accidents And How To Avoid Them | RideApart

Sam said he noticed a black BMW texting. As Sam filtered to the front of traffic at a stop light, turning South onto La Cienega Blvd. in LA, he leaned over and yelled at the driver to stop texting. The cager didn't like this very much, blew his horn and began to drive aggressively. Sam said he slowed down to give himself more time to react if something happened. While the wide shot of the GoPro distorts the edges of the footage, Sam said he remained fully in the left lane during the entire clip.

Here's his side of the story: "I was fully in the left lane the entire time. When the driver started getting really aggressive with me, I definitely slowed down to give myself extra reaction time (there wasn't enough traffic to really get away from him right there). I was going probably about 30mph or so... slowed down from maybe 40-ish?"

After the adrenaline wore off, Sam discovered he had a bad concussion, "bad enough for me to forget what day, month and year it was and knocking all memory of the past week out of my head," wrote Sam. Along with, "two hairline fractures in my left shoulder and a broken left foot (which would require surgery)."

According to Sam he's spoken with the police, but they haven't been table to track down the driver yet.

Watch the video below and read the full recount of the story. To donate to Sam's medical fund, click here: http://www.donationto.com/Motorcycle-Collision-Bills

On March 26, 2015, I was driving to work on my motorcycle. It was a fairly typical commute, full of cagers cutting me off, merging into me and generally just not paying close enough attention. As I was filtering up to the front of a light, I noticed one particular man in a black BMW convertible. He was very busy texting and talking away on his mobile phone. He became visibly angry when I yelled at him to put down his cell phone while he was in his car. Even after he honked at me, much to my surprise, I kept my cool... I didn't flip him off or get into his face, however much I wanted to. Once the light turned green, I proceeded through the intersection, making my turn. Behind me, the BMW driver came flying up behind me very aggressively. After a couple of blocks, he pulled into the center lane to my left and, once he was parallel with me, swerved his car into my lane, knocking both my bike and myself to the ground. Without slowing, the driver took off down the road.

Aside from a significant amount of bumps and bruises, I suffered a severe concussion (bad enough for me to forget what day, month and year it was and knocking all memory of the past week out of my head), two hairline fractures in my left shoulder and a broken left foot (which would require surgery).

Because the driver is currently under criminal investigation, I will be unable to go after him or his insurance. for any sort of compensation for quite a while. Additionally, the insurance on the car (which was not owned by the driver) only has a very small amount of coverage for medical and property damage. All of this money has been swallowed up in one quick swoop by my significant amount of bills. I'm left still having to pay several thousand dollars for my health insurance's out of pocket maximum. Additionally, I'm left with several bills associated with purchasing medical equipment (crutches, shower seat, etc.) and transportation (car rental, Lyft rides). My credit cards are close to full-up and these bills will be coming due very soon.

READ MORE:  How To Ride A Motorcycle Again After Your First Crash | RideApart