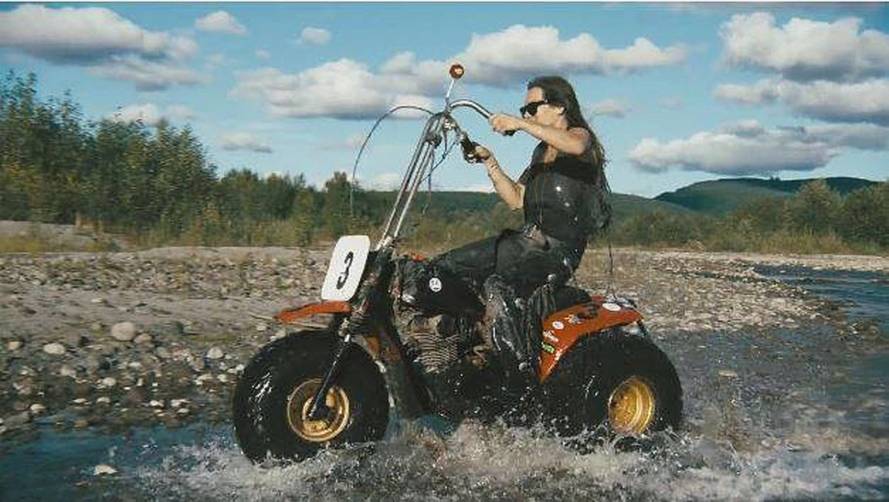 Here are some visual and cultural cues to help you distinguish a Biker from a Hipster.

Interpreting motorcycle culture is nuanced science. For the untrained, identifying one subset of motorcycle riding homo sapien from another can be a tricky business as there are no hard and fast rules. So, to help clear things up, I've assembled a few images from around the internet to illustrate a few of the visual and cultural cues that can help us distinguish a Biker from a Hipster.

While this fellow demonstrates impressive flat-track moves, his choice of cargo shorts and sock-less Keds peg him squarely in the Hipster camp. While Bikers may not be known for their safety-minded riding apparel (leather vests and skull-cap helmets), you wouldn't catch a biker dead in a pair of shorts.

Both Bikers and Hipsters covet by-gone eras. The subtle distinction that delineates them can be broken down into a preference for the urban vs. the rural. Both groups will wax nostalgic for the 1880's, but a Hipster is want to prefer gas lamps and cobblestones, while the Biker's affinities yearn for herds of wild bison and the grasslands of the open range.

The denim and leather might throw you, or perhaps the seemingly correct application of "ape-hangers," but make no mistake, this image is of a Hipster. While the juxtaposition of a chopper and 80's vintage three-wheeler tickles the ironic funny bone of the average Hipster, Bikers find this offensive, seeing this aberration for what it is: Open mockery of their way of life. Someone will get their ass kicked for this.

Don't let the clown costume fool you. Lurking beneath that rainbow stretch-wig and white face-paint is a bad-ass Biker. While he's probably dressed up for a toy drive or some-such, his affiliation with the Biker is clearly revealed by the American Iron he rides. While custom choppers like his appear to be the radical expression of freedom loving rebels, they in fact, adhere to a strict set of design cues held dear by the Biker set. The un-ironic flame paint that festoon his bike along with the dangerous amount of engine chrome, combine with the angle of the fuel tank and rake of the elongated fork tubes to form a coded symbol that tells any fellow Biker, this guy isn't clowning around.

The retro full-face helmet and the impossibly impractical handlebars are the tell here. This guy is a set of "ape hangers" and skull cap helmet away from being a Biker. Remember, small differences account for a lot.

While Hipsters are also known to enjoy a day at the beach, only Bikers would insist on taking sexy snaps of their bikini clad girlfriends while wearing engineer boots and heavy denim pants. Hipsters curate a wider range of costumes for various occasions than those of the simpler uniforms worn by the Biker.

While it's common to spot Bikers riding their "Hogs," in what appear to be uncomfortable riding positions (tall ape-hanger bars and forward mounted footrests), this hip rider takes discomfort to an alarming new level. The combination of clip-on bars, a rearset pillion, and forward set foot pegs broadcast loudly, "I'm going to look cool at all costs!" A mantra no doubt, chanted at both Biker and Hipster gatherings. Hipsters, however, are more devout in this capacity, and as such, are willing to take the painful practice to astonishing new heights.

(Author's Note:  I'm aware that this is an image of master bike builder Shinya from Menacing.  The inclusion of him on this beautiful motorcycle is meant to be illustrative of the "stylishly impractical.")

Don't be thrown because you've seen Hipsters frequenting artisan butcher shops to purchase unique cuts of meat from heirloom breeds of swine and game. However, only a real Biker would hunt his own wild venison, field strip and haul it back to the clubhouse on his '67 Shovelhead. Where as a hipster would only seek out venison that was sustainability farm raised and certified organic.

Sure, you've seen mustachio'd young men come to fisticuffs at Hipster MC club gatherings, but these schoolboy skirmishes are nothing compared to the animal viciousness of a real Biker fight. (See "Hells Angels" by Hunter S. Thompson 1966)

Cultural commentary is to want to stir-up heated discourse.  If you disagree with any of the academic anthropological observations discussed herein by the highly informed author, he suggests you "eat it."  Or better yet, give him your worst in the comments below.