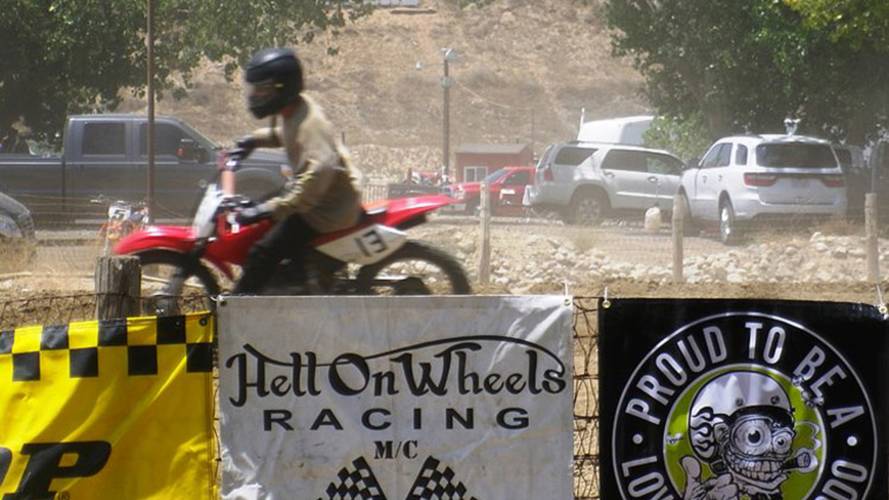 I wrote a preview of Meatball’s Hell on Wheels Scrambles event, and I was going to just let it go at that. I was short on cash since my government disability check hasn’t come yet (I am unable to work because I can’t stop thinking about motorcycles), so I was only going to spectate. But then I saw something so incredible, something that needed to be told to the world, because it may never happen again:

Several guys from Ducati showed up on bone stock scramblers, raced them in the dirt, and did surprisingly well!

We're talking Hollywood action movie levels of air here, on a bone stock street bike that weighs over 400lbs. He came in second in both of his races too, losing to a full dirt prepped Harley Sportster both times, but beating all of the other twins (and a Velocette), which were all on more dirt correct tires.

I discussed it with Nate Verdugo, the fastest of the two riders and a Ducati PR guy, and he confirmed they were 100% stock down to the street oriented tires. He did have to take off one rear view mirror after practice because it had come loose, and he broke a foot peg casing a big jump, but these bikes were stock down to the headlights and license plates.

Good thing for them they did well, otherwise I don't think Ducati would be letting them sign out loaner bikes for the weekend anymore.

Other races were run in other classes and fun was had by everyone, but nothing topped seeing those Ducs take wing.

Here is the start of the race for first timers, with the first row having a Honda Ruckus, a Yamaha 125 enduro, and a full size man on a little kid's 50cc bike.

Where else are you going to see stuff like a home built motocross pull start mini chopper?

Can you describe the Ruckus, sir?

There are plenty of more modern ways to start a motocross race, but the traditional beautiful woman waving a green flag still works great.

The bikes and the bodies may be old and worse for wear, but the fast guys still fly.

And it ends the same way it begins.