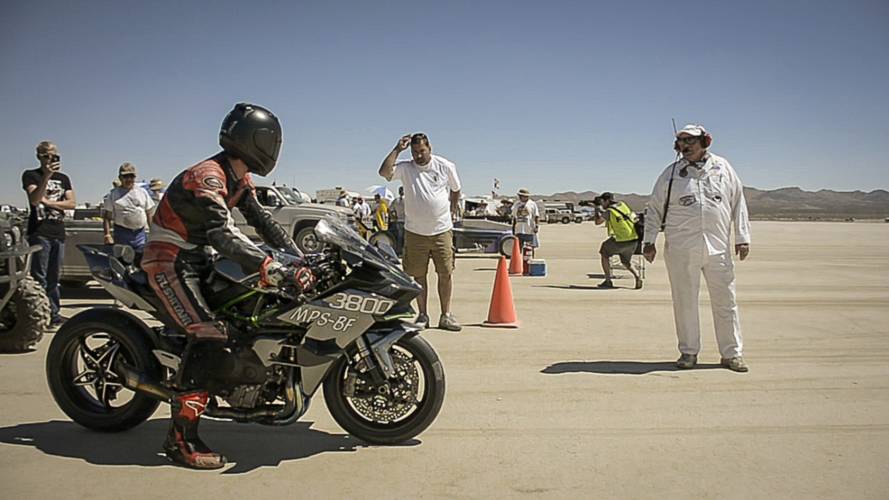 A factory stock H2R recorded a speed of 142.770 miles per hour at a SCTA Land Speed Trials meet held on the dry lake bed at El Mirage California.

A factory stock H2R recorded a speed of 142.770 miles per hour at last weekend's June 14-15 SCTA (Southern California Timing Association) land speed trials meet, which was held on the dry lakebed at El Mirage California. The H2R was spotted on Saturday, June 14th being trailered along the 1.3 mile lakebed race course alongside teams from Kawasaki USA and Japan. When asked why the H2R was wearing race slick tires, a Kawasaki team member was overheard explaining that they were interested in seeing how the H2R performed in its stock load out.

The H2R raced on the lake bed with number 3800 in the MPS-BF frame and engine classes. "MPS" meant that the H2R was racing in the "Modified Partial Streamlining" designated frame class category, and the "BF" denotes the bike as "Supercharged / Turbocharged Engine: Fuel," with "B" meaning "Blown" and  "F" meaning the machine can run on something other than gasoline.

The H2R was getting plenty of attention out on the lakebed. As the machine lined up for its first "rookie" run, SCTA officials took time away from their other duties to watch the race. SCTA rules require that first time riders and drivers make a clean pass under 150 mph. Japanese rider, Shigaro Yamashda, rode the H2R safely under the 150 mph rookie limit.

How fast a H2R can actually go on the lakebed remains to be seen. The next SCTA El Mirage meet will be held on July 12, 2015.