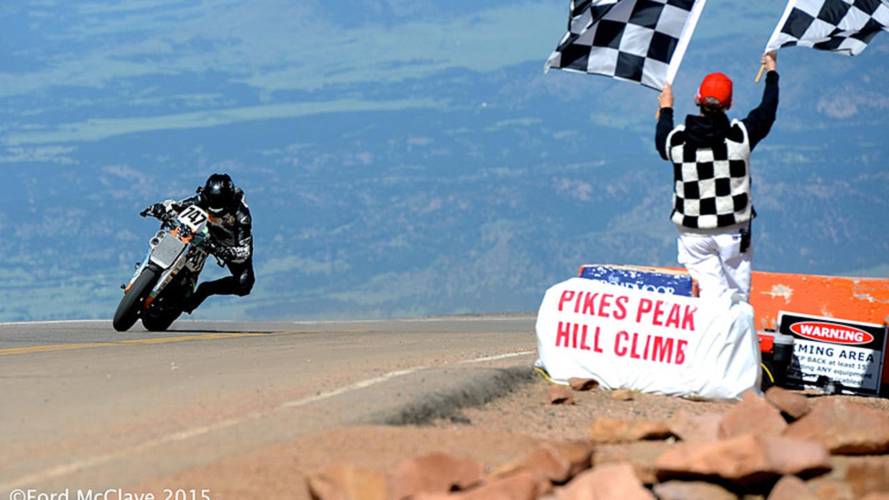 Ronin | Voxan | Victory - 3 V-twin PPIHC Specials We'd Love To RideThe first time I watched the Pikes Peak Hill Climb was as a kid back in 1968 on...

The first time I watched the Pikes Peak Hill Climb was as a kid back in 1968 on ABC's Wide World of Sports.  They were spanning the globe to bring me the constant variety of sport. Bobby Unser won it. He was sliding that open wheel #92 car right to the edge of the dirt and I was on the edge of my seat. Hooked. Those were the days of legends.

If ever the adage about a thing being greater than the sum of its parts were true, it would be here. Every year you see a few machines that just set a whole new standard for igottahavitness.

When I saw Guy Martin's Martec PPIHC Special for the first time coming out of the truck at Devil's Playground last year, I was smitten. I just could not take my eyes off of it for the rest of the week. The welds, so many perfect welds, the hardware, the color of the metal, even the paint job. Every single component had a function and yet remained mechanically beautiful. It was rumored to have a baseline of about 275hp.

Guy told me it was capable of much more but there was a point where it would become unusable. "Sure, Guy", I thought to myself, nodding in thoughtful agreement -  as if I could relate. I've always considered anything over 275 HP a bit above my pay grade. Kawasaki obviously did not get the memo.

This year I discovered not one, but three very different V-twin campaign's here, attempting to break a record or two. The Victory, the Ronin and the Voxan.

I believe it was Peter Egan who once wrote that while some people sat in their house to watch television at night, he preferred to spend his evenings out in the garage, watching Ducati. I was very grateful for that casual observation as it struck a chord with me. It made me feel a bit more at home here in the world since I had spent so many warm summer nights in my garage doing just that.  As a teen, my mom would find me out there past midnight sitting on a milk crate, watching CZ, Husqvarna and Penton from every angle imaginable. If she knew how to spell cyclelogist, she'd have called one. Thousands of us share this disease and we are aliens who somehow manage to find one another at events like these. To date, there is no known cure for our affliction.

I read about Ronin first in the Denver Post back in 2012. Being local here in the heart of Denver's RiNo district, these guys were my preferred pick to win it. The thing that got me was when Mike Mayberry was quoted as saying it was supposed to sort of look like a charging buffalo. There are a herd of buffalo about three miles from my south Denver home and looking at it from the right angles I had to agree. I had never considered the profile of a buffalo as being "sporty" but after last week, I've come to see things differently. If you want to argue, put on a Ducati t-shirt, jump the fence and try outrunning one.

As mentioned on their website, the company is named after the Japanese legend, based on the story of 47 exiled samurai who later avenged their master's death.  Ronin has been quietly building and selling their 47 hand built exotics to collectors one at a time. They decided to turn one of their three spare bikes into a Pikes Peak assault weapon and recruited Travis Newbold, a PPIHC veteran and master of the 450 class, a seat on the bus.  It was a good move. Travis rode that raging buffalo up the mountain to finish 2nd in the motorcycle division and 10th overall. Ronin is producing 47 of these orphaned EBR (Eric Buell Racing) 1190's and shutting the doors. They began back when Buell lost its backing from Harley Davidson in 2009. Not a bad effort for a spare parts bin startup. They strip each one down, put a new unobtanium heart in it and put it back together. it then gets a name after one of the samurai. The one you are looking at is named Oishi Yoshio.

Bow to your Sensei!

There have been a lot of design attempts over the years to control the variation of rake and trail during the loading and unloading of front suspension and the Ronin appears to do a pretty good job of it. Unlike a telescopic fork, the Ronin allows control of the axle path, the dive, the rise, the underbraking and whatever else happens up there. Now I'm certainly no professional rider, meaning I stopped racing long ago when the shower of sparks and smell of burning leather was no longer fun. However, I would consider myself a precision rider and the suspension on the Ronin intrigues me to no end. Travis said the bike rode like it was on rails in practice and I'd give almost anything to do a few laps on a track day to see how it compares to my Triumph Street Triple R or my  buddy's 1200S Pikes Peak Edition Multistrada. Both, in my opinion, are pretty dandy handling bikes.

But like the Victory, the sound of that 1190 is just pure awesome thunder. It's the AR-15 of V-Twins. Maybe even a buffalo mounted 50 cal. Now with EBR shutting it's doors and auctioning off its hardware, will another Ronin pop up? Maybe another version of the 47?

I was already following Victory and Don Canet, the Cycle World writer and rider. Don rode the cream of the crop last year.  He and Mickey Dymond finished 2-3 (10:10:101 & 10:11:319) on the Spider Grips Falkner-Livingston Pikes Peak Edition Multistrada. His reward for this insanity was a seat on the Project 156 Roland Sands Design Victory to try it again.  I was covering the race from the summit and agreed to be his kickstand boy while talking to Paul at FanFest, so that he wouldn't have to lean that beautiful red steed on a boulder for the rest of the day.  Now an American twin on America's Mountain had everyone's hopes up.

Victory teamed up with Rolans Sands Design to create this machine with a single goal in mind. Victory. They nailed it from a design perspective. Like the Martek, it is the very essence of a Pikes Peak machine.  When Don came booming past the rolling start line on race day, the whole mountain was cheering. There are so many things on this machine that draw the eye. The low slung fuel tank, the chopped tail, the hand made exhaust, frame and swing arm. You are drawn first to the Ohlins shock and then to the linkage at both ends trying to comprehend not only how it all works, but who figured it all out. Roland Sands has always been a class act. I haven't really been a chopper fan since the early eighties, so this whole new era of cafe bikes, street trackers and high performance machines are to me, the halcyon years of bike building. Pikes Peak is the crucible.

Where it really hits home with the Victory though, is when they lug that big wooden box with the rope handles over to fire that mother up. The one with the two 12v RV batteries, wired in parallel for 24 walloping volts of whoop-ass, fire-in-the-hole. At 15.5:1 compression the Victory needs every bit of it and yes, it will make dogs bark and mothers snatch up their crying children. For the rest of us though, it is pure Viagra on wheels. There, I said it. As you probably already know, Don had an unscheduled low speed crash and then the issue, whatever it was, thwarted the 156 Project's shot at the record and it rolled to a stop just short of the summit. It's gotten a bit snarky out there with early press releases but Don promises us the facts when he tells his story in Cycle World. The bike has been shipped back to Victory and they'll determine the cause.

Here's one fact we do know. DNF. Regardless, it gave us all more than a thrill and I fully expect and hope to see it back next year.

Now the Voxan is a bit of a puzzler to me. French? Wait, the French build stuff? Ah yes, almost forgot about Sebastien Loeb's Pikes Peak Record Run of 8:13, didn't we? He even fooled the computers, which predicted he could run an 8:15ish. Who was it that said money can't buy happiness?

So this Voxan Cafe Racer, though over a decade old, is still kind of cool to me. Yes, I know. Extinct, but so began the birth of the Ronin. Wikipedia tells us that "Voxan was forced into liquidation, and is now a subsidiary of the Monaco-based Venturi Automobiles. ... Voxan's manufacturing department ceased production... "

But I'm a huge Moto Guzzi fan and this oddity kind of reminded me of the V11 with the engine turned the right way. Take that for what it's worth though. Last year I bought both a an MZ TS-125 and a 57 Lambretta LD 150 in a box to rebuild for fun. That's kind of like saying your relaxation hobby is fire walking or sniffing glue, but I regress.

There were three models released: the Black Magic Roadster, the Street Scrambler and the Café Racer. All of them used the same basic chassis and a 996cc V-twin engine. The engine sounds very much like my buddy's Ducati ST3S. Nice controls, instruments and..wait.. not Brembo brakes. Ah yes. French. Aesthetically, it reminds me a bit of a Britton. From the sound of it, I'm guessing it was in the 130HP range.  Some might say that it is more of a patriotic effort than a serious attempt at win given the competition.  But hey, give it another ten years and it might win the vintage class, right?

Say what you will, but I liked seeing it there.

For anyone who has ever ridden these 156 turns to the summit, attempting it in under 15 minutes could be a very harrowing experience.  Attempting it in under 10 minutes invokes a whole different set of words altogether. Most of them you couldn't say in front of the children. Your margin of error fits comfortably on the face of a silver dollar and though this mountain is called many things, forgiving is not one of them. To break a record here you have to take lines that touch paint and get you very within inches of the edge.  Conditions change very quickly up there. In 2012, after finishing with a time of 9:58.262 Greg Tracy told me, "That wasn't worth second place." He was one of the first to break the ten minute barrier. The following year he moved to 4 wheels setting a record with the Mitsubishi electric.

The point is, anyone can show up with a production racer and have a go at it but Pikes Peak is really a place for the prototype, the tribute, the underdog. Pikes Peak is American ingenuity at its finest. It's just a matter of time before the electric motor and the combustion engine give each other the respect they deserve.

Keep em coming, boys. We'll keep showing up to cheer you on.