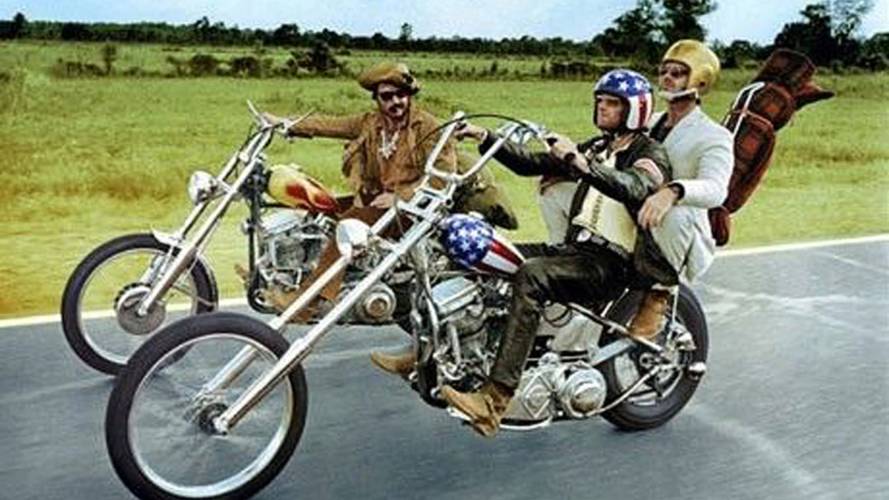 This is an authorized replica of the Captain America bike from Easy Rider.

Alright, the story the seller of this week's bike weaves is a little bit hard to follow. If we are to believe them, this bike was originally owned by actor Laurence (Apocalypse Now) Fishburne and was used in the movie Biker Boyz, which he appeared in, but only rode sportbikes.

A little bit of Google digging turns up the same bike, with the same celebrity story for sale about a year ago in Memphis for $27,500, and there is a screen grab from Biker Boyz of someone riding a Captain America chopper similar to it. So I guess it checks out...

What isn't dubious is that this is a rare example of the officially licensed tribute bike that Peter Fonda worked on with the California Motorcycle Company to produce for the 30th anniversary of the movie. As such, it's not a perfect replica of the movie chopper, but is a slightly toned down version that features less rake, an electric starter, and a disc brake on the front wheel (instead of nothing). I apologize for the artistic quality of the pictures, I can only work with what the eBay seller posts.

The seller either gets some details wrong or just doesn't really know what they are selling. The official spec sheets for these called for an S & S motor with 88 cubic inches, while the seller says it's a rare 1340cc motor. Whatever it is, it's still a cool bike with a former celebrity owner, and a film credit of its own.

But it's no real Captain America replica—the mufflers being wrong and at the wrong angle is the biggest giveaway to that. It's still a cool chopper and many people who you ride by will never notice the details about it that are wrong. It does, however, come with a stars and stripes helmet autographed by the man himself—no not Laurence Fishburne, but Peter Fonda.

If you're bored at work, do a Google image search for the original and play spot the difference with the eBay bike—as if RideApart was a motorcycle focused issue of Highlights for Children.

The story of the original movie bikes, who built them, and what became of them is now both Hollywood and biker legend—and much too long to get into here. CMC's became Indian motorcycles of Gilroy, CA, then sold out to some investment group, which then went belly up and sold out to Polaris/Victory. So why not read the eBay description of the bike for sale instead (edited for brevity and clarity):

This Captain America bike is #108 of a 110 motorcycles produced in the production series and has a very rare 1,340 CC engine.

The bike made an appearance in the movie BIKER BOYZ with Lawrence Fishburne.  He acted in the movie as the lead character, Smoke.  A screen shot showing the Captain America bike in the movie is attached.

Fishburne eventually donated this bike to the Dr. Martin Luther King foundation and it was later auctioned to raise funds for the MLK memorial in Washington DC.

It comes with all documentation of Lawrence Fishburne's ownership including the initial registration, license plates and a key tag used in the BIKER BOYZ movie.

Included with the bike is an autographed helmet by Peter Fonda and autographed pictures of Peter Fonda, Dennis Hopper and Jack Nicholson.  Numerous autographs are also included from the cast members of BIKER BOYZ.

This motorcycle has only 918 miles and has won Best of Class/First Place in numerous bike shows.  It draws a huge crowd in any public event.   I have many more pictures that I can email upon request.

I would be pleased to answer any questions about this one-of a-kind motorcycle."

And so, if you have $24,900 burning a hole in your pocket (the buy it now price) why not blow it on this almost famous bike?