A Bit of History: World Superbike at Laguna Seca 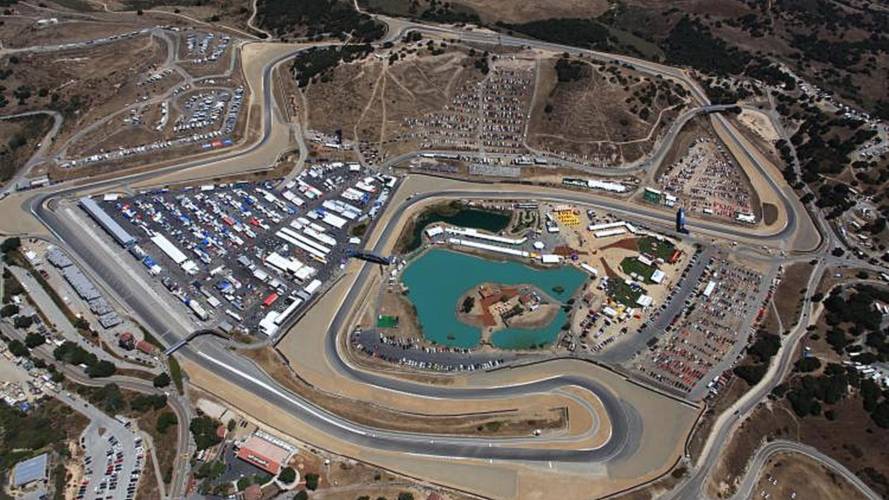 Mazda Raceway Laguna Seca is world renowned—mainly due to hosting various worldwide motorsports events. The track is located in Monterey, CA and is only 2.238 miles and has 11 turns, with it’s most popular ones being 8 and 8A known as the “Corkscrew.” (Thanks for the info Wikipedia!)

Watching a motorsports events—especially a motorcycle one—is thrilling, and top-tiered racers all the way from MotoGP have graced the track. Before MotoGP started racing there back in 2005, however, Laguna Seca hosted World Superbike, which came to Laguna Seca in 1995 and continued racing there until 2004. WSBK took an eight year hiatus from the Laguna and returned in 2013 while MotoGP was making its exit that same year.

If you’re unfamiliar with World Superbike (WSBK), here’s a quick history: It started back in 1988 and is regulated by the FIM, the big dogs who govern motorcycle racing worldwide. It has two main races, and the results from each are combined to ordain two World Champions: one for the rider and one for the moto manufacturers. What makes WSBK so cool is that the motorcycles that these high caliber racers ride are souped up versions of bikes that are sold to the general public. This is the main difference between it and MotoGP, which uses GP-specific motorcycles.

So, let’s go back to ‘95 when WSBK made its debut at Laguna Seca. In this era, the rider field was conceivably one of the deepest in WSBK’s history—you had studs like Carl Fogarty, Anthony Gobert, Troy Corser, Yasutomo Nagai and Colin Edwards. That year also had well-known AMA Superbike riders who entered the races such as Freddie Spencer and Tom Kipp.

In that three day weekend of racing in July (21st-23rd) 1995, there were 32,000 people who came out to watch the action. In his article, “Americans versus The World,” motorcycle journalist Dean Adams gives a thorough account of the WSBK races at that time. I'll highlight a few noteworthy things in the article, and even though it’s a bit long, it's a great read.

In the beginning of the piece, he describes the scene in the paddock quite vividly:

“Cool stuff abound in the paddock, from carbon fiber and magnesium swing-armed Ducatis to Agip girls with collagen implanted lips, pouty and ravishing. The factory supported World Superbikes, even sitting on their plywood work tables, appeared so decidedly different from their AMA Superbike brethren: the tail wickedly high, front wheel tucked tight to the chin of the fairing lower, the Ducati of Troy Corser looking like a red street rod from American Graffiti.”

Adams goes on to discuss the superiority of the international superbikes compared to the American ones, specifically when it came to Yamaha and Ducati. For example, he mentioned that Yamaha WSC (World Superbike Championship) Superbikes used none of the American Yamaha kit pieces. The WSC motorcycles also had a better frame, a different wiring harness, ignition, mounting points, and ignitor:

“Machinery was not of the same vein as same vein between the Yamaha and Ducati teams and their international counterparts... Americans wanted the boys from the old red, white and blue to do well and beat the Euros at their own game. But with well-funded and, in some cases, better equipped national teams racing in the same event as the factory squad, a unique racing situation evolved : inter-manufacturer rivalry. American Honda versus HRC/Castrol Honda; American Yamaha versus Yamaha Japan and Larry and Eraldo’s Ducatis versus the Ferrari team’s best stuff.”

Adams still had hopes for the Americans, however. He goes on to say that Laguna was one of the most technical tracks in the US and the most challenging one on the WSC calendar. Now that’s a pretty bold claim, and perhaps it was true back in the day, but either way Adams argued that Americans had the advantage at Laguna since they were more familiar with the track.

In the end, that first year at Laguna was dominated by Australians Anthony Gobert (racing a Muzzy Kawasaki), who took first place and Corser (on a Promoter Ducati Corse) coming in second. The first American win at Laguna came shortly after in 1996 with John Kocinksi (Castrol Honda-HRC) and Gobert in second. In fact, it looks like the Australians dominate at Laguna with Americans closely behind. Here are some notable Laguna Seca facts provided by worldsbk.com:

It doesn't look like the Australians or the Americans will be making the cut this year at Laguna Seca. The top four contending for the WSBK Championship are all British: Jonathan Rea (Kawasaki), Tom Sykes (Kawasaki), Leon Haslam (Aprilia), and Chaz Davies (Ducati). (Cue in “God save our gracious Queen, long live our noble Queen…”)

This year, Laguna will also host all five classes of MotoAmerica at Laguna: Superbike, Superstock 1000, Supersport, Superstock 600, and the KTM 390 cup. There will be some great racing happening this weekend in Monterey and we can’t wait to watch it. Anyone heading to WSBK this weekend?

Throwback Thursday: Check out the 1995 WSBK Race 2 at Laguna seca below.