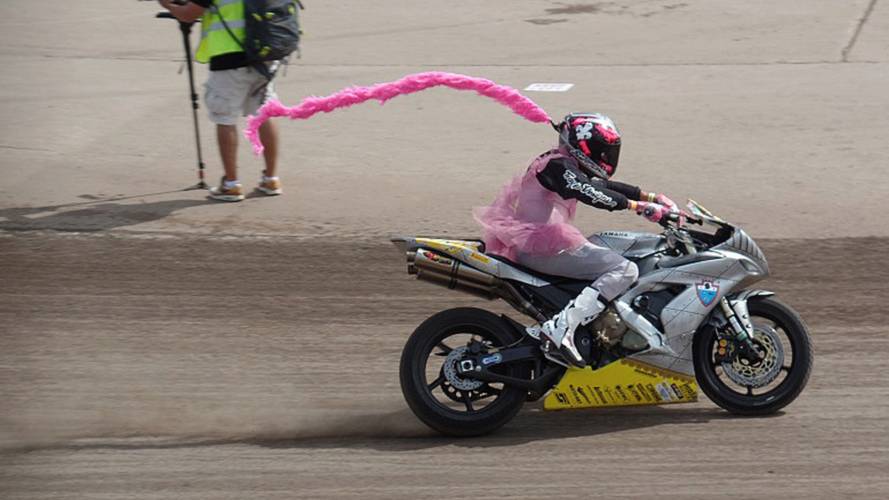 Dirt Quake: The Ridiculous, Awesome Event That Makes Motorcycling BetterDo you have a motorcycle? Do you suffer from a total lack of regard for the...

Do you have a motorcycle? Do you suffer from a total lack of regard for the well being of either that motorcycle or yourself? Do you like dressing up in silly outfits? If you answered "yes" to these questions, you are fully qualified to participate in Dirt Quake—an annual event that sees riders of all skill level racing on a dirt track on inappropriate machines.

Dirt Quake IV took place this past weekend in King's Lynn, England, and it was easy to see why the event has become so popular so quickly. Dirt Quake started in a relatively quiet corner of eastern England just three years ago. Billed as a "Go fast, turn left celebration," its unique blend of dirt track racing, motorcycle hooliganism, hipster vibe, and minor-league-baseball-style showmanship has inspired copycat events around the world, including the raucous Dirt Quake USA.

MUST READ:  This is Dirt Quake | RideApart

That's not to say the British original is in any way tame. Arguably, the fact that health insurance is free in Her Majesty's United Kingdom makes it an even more haphazard event. Anyone is welcome to race on any bike, or scooter, of any age and any size engine.

Competitors don costumes and abandon all sense of decorum for the races. Meanwhile, a party atmosphere is maintained by a live band, a roving stand-up comic MC, and sideshow performances such as Scooter Tug o' War and Motorcycle Limbo. In the former, two scooter riders are tied at the waist to one another and sent off in opposite directions with the aim of pulling their opponent from his/her seat; in the latter, a particularly limber dirt tracker drifts his bike below a knee-high bar.

The "all are welcome" nature of the event draws not only amateurs, but also a few big names. Perhaps most notably, Guy Martin was at this year's event, racing a Sportster chopper in two different classes (Harley and Chopper). He won both. Meanwhile, the perpetually red-faced Charley Boorman (the one in Long Way Round who isn't Ewan McGregor) raced a snarling old Suzuki he had built himself, earning a place in the Street Tracker class.

Lesser known to the UK crowd, but adored for his antics was Frenchman Serge Nuques, who raced the Dirt Quake track on the same Yamaha R1 he had used at the 2005 Isle of Man TT. Serge won his class so handily that he had time to do wheelies, and came across the finish line having dismounted completely while sliding alongside his motorcycle. Keen eyes would have also spotted David Borras of El Solitario fame, though attempts by your intrepid reporter to take a selfie with the custom builder were thwarted by Borras' amazing ability to vanish into a crowd.

Other big names in the custom scene were also represented at the event, including Deus ex Machina and the crew from BikeShed.cc. As evidence of how quickly Dirt Quake has become an important part of the "Braap" scene, Yamaha served as one of the sponsors of the event and brought along a number of custom bikes from its Yard Built series (including the Botafogo-N XJR1300 seen below) to be displayed amidst the food and beer and cavorting of the grandstand.

Talent from UK custom shops was also showcased. The prevalence of bobbers, street trackers and nouveau racers elicited the dreaded tag of "hipsterism" from the lips of a few onlookers. There's a silliness in delivering such a criticism at Dirt Quake, which is steeped in the spirit of hipsterism—and rightfully so. That thing that old men on Goldwings decry as hipsterism is saving motorcycling. Events like Dirt Quake, Wheels & Waves, and the Bike Shed Show are the reunification of the romantic and the classical sides of motorcycling that Robert Pirsig talks about in Zen and the Art of Motorcycle Maintenance.

"Hipsterism" is simply an honest acceptance of the importance of aesthetics in motorcycling. It's the act of being willing to say that one of the reasons we choose this or that motorcycle is because of the way it looks and sounds—the way we feel it makes us look when we ride that bike. That honesty is an extension of the inherent joy of motorcycling—the unbridled glee that comes from twisting the throttle of any bike, scooter, or whatever you have that rides on two (or three) wheels.

There was plenty of glee to be seen at Dirt Quake IV. The event this year drew a large contingent of rowdy French riders who rode the ever-loving wazoo out of the mysterious collection of scooters, people movers, and claptrap machines they had brought. Inexplicably, a number of them chose to ride dressed as Teenage Mutant Ninja Turtles. Because of the small-engine nature of their weapons of choice, revving the engines was soon replaced by honking the bike's horn as a way of making noise. Many would also honk and use the bike's signals when attempting to make a pass in a race.

With the exception of Serge Nuques, only one of this contingent was successful: A Ninja Turtle riding a pizza delivery scooter that he claimed to have piloted all the way from Paris, managed to take third in one of the Inappropriate Bike races. He was celebrated with chanting and confetti by his countrymen. He, in turn, celebrated by performing a massive burnout in the center of the arena (you have not lived until you have seen a scooter doing a burnout.) The Frenchman was so dedicated to this task it filled the open-air arena with smoke.

This kind of hooliganism was to be seen in every part of the event, making it feel like a gathering of close friends, despite the fact the stands and surrounding area were full of people. One wonders about the future of Dirt Quake; will its popularity damage it? As the event's MC joked: "Tell your friends. Though not too many of 'em because we're bloody runnin' out of space."

To be honest though, it seems unlikely that Dirt Quake will become staid or boring. One senses it will go from strength to strength—its success helping to make it an ever more entertaining event.

After all, the races were fun, and the crowd was allowed onto the track to participate in the awards ceremony—something so loosely organized that a few of the winning racers weren't informed that it was taking place. When Guy Martin failed to materialize to accept a first-place award, Serge Nuques taped on some sideburns and accepted it in his place. The awards weren't anything special; just crudely designed number plates with a 1, 2 or 3 on them. At Dirt Quake it really is the taking part that matters most.

The day officially ended with an opportunity for all to see a Wall of Death show put on by the Ken Fox troupe, one of the last daredevil riding families in Europe. Guy Martin had encouraged the group to come to Dirt Quake and they performed for free, contributing to the feeling of this being a gathering of friends.

Those friends kept partying well into the night, with things growing ever more weird as the evening turned to morning. A band fronted by a man dressed as the Doctor Who villain Davros performed Ska. The French Ninja Turtles did wheelies and burnouts, and everyone promised themselves they'd be back next year to do it again.

For more pictures from Dirt Quake IV, see below:

A female rider from Belgium

Guy Martin's chopper. Note that the keys are still in it.

Guy Martin after a successful race

Like a proper Royal Enfield, this bike struggled to make it once around the track.

Take the next left

Waiting to be let onto the track

A crash reminds the crowd it's not all fun and games. Fortunately, the rider was OK.

Bikes came in all shapes and sizes

The racers were surprisingly competitive.

This bike looked so cool. The rider seemed desperate to keep pace with Guy Martin.

Cool in a different sort of way...

Cool bikes to be found both inside and outside the arena

Every time I see another bike like this I think: "Why won't Harley just make one of these for production?"

MUST READ:  Why We Want to Race the Dust Hustle, and You Will Too | RideApart