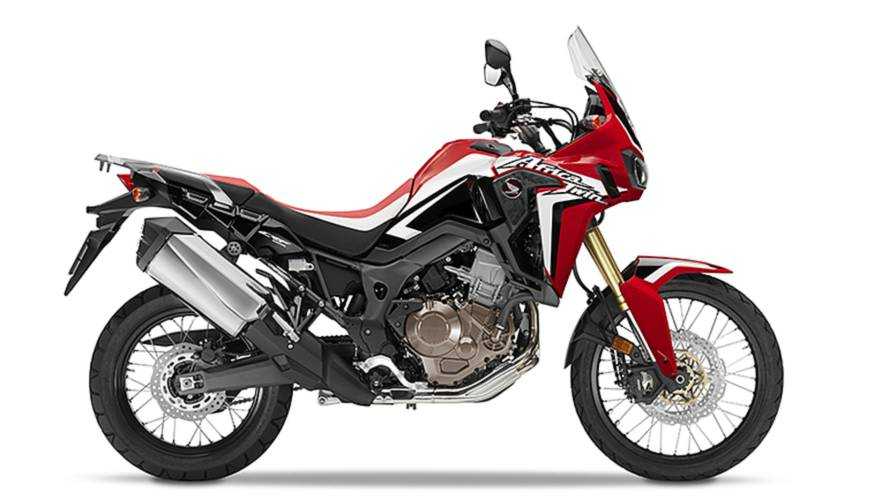 The important pieces of info to catch here are the size, power and weight. Even though the bike has been anxiously over hyped, by the sounds of the spec sheet it may be a great ADV bike, but I wouldn’t call it a game-changer just yet. It’s 1000cc with an estimated 93 hp, a 33.5 inch seat height and 503 pound curb weight (add 31 lbs. for the 534 lb. DCT/ABS model).

The Africa Twin will settle into the 1000cc ADV market just fine, coming in at about the same seat height and curb weight as the Suzuki V-Strom 1000 (33.4 inches seat height) and the KTM 1190 Adventure (34.4 inches seat height). Although, it may have more of a dirt-bike feel to it than either bike. According to the Honda press release sent out this morning, the bikes sounds like it’ll be a nimble, easy to handle, compact off-roader. A dirt bike in ADV clothes, just with a few more pounds.

READ MORE: Adventure Is Out There: 5 ADV Bikes For New Riders | RideApart

The adjustable seat can move .8 inches resulting in either a 34.3 inch seat height or 33.5. A big tank for touring is also there with just shy of 5 gallons too.

“For the CRF1000L Africa Twin’s chassis, three key attributes—highlights of the original XRV750—were targeted: off-road performance, touring comfort and the everyday agility that makes for a great all-rounder or day-to-day commuter," according to Honda's press release.

Here’s the fun part—Honda sees this engine as basically a 1000cc version of their dirt bike CRF platform (hence the name). “The CRF1000L Africa Twin’s 998cc parallel-twin power plant draws heavily on Honda’s off-road race experience with the CRF250R/450R competition machines, and uses the same four-valve Unicam head design for compact overall dimensions.” Honda also used the positive gear-box design and slipper clutch from the CRF platform. So by the sounds of it, Honda made a big, road legal dirt bike. Hell yeah!

Throw in some CBR engineering and you have a badass engine: “A lightweight cast camshaft—using the same materials as that on the CBR1000RR—operates the valve train, and twin spark plugs fire the fuel/air mixture in each combustion chamber.”

The most notable quality of the engine besides the big horsepower is the packaging. It’s apparently a relatively small power train package, resulting in good ground clearance—9.8 inches. Here's where the bike has some potential on the fun scale (beyond that of the spec sheet). If the engine and overall weight is packaged in a particular way than this bike, while heavy, could feel nimble and fun.

The Africa Twin will feature a semi-double cradle frame which, according to Honda, allows for plenty of cargo while also being smooth enough for long highway miles. Up front you may have already noticed the beautiful gold Showa forks—they’re fully adjustable (but no sizes listed). There are Nissin four-piston rear-mounted rotors up front and a Showa pre-load adjustable shock in the rear. For the spoke wheels, it’s 21-inches up front and 18 inches in the back.

Here’s the part everyone has been waiting to read about. Honda Selectable Torque Control (HSTC) will allow for three levels of power and intrusion. Also, you can turn off the ABS all together for off-road riding. Both HSTC and ABS are upgrades and not available on a base model.

First and foremost, if you hate the idea of not having a clutch and gear shifter, the Honda Dual Clutch Transmission (DCT), which eliminates the need for a clutch lever and traditional shifter, is only an option on the Africa Twin. You can still get a standard 6-speed gear box, so rest easy tonight you traditional off-roaders.

The DCT sounds like it’ll be the same user-friendly system as on the NM4 and NC700: “It features the standard manual mode—allowing the rider to operate gear shifts through triggers on the left handlebar—and two automatic modes. D mode offers the best balance of fuel efficiency and comfort cruising. S mode gives extra levels of sport performance, with three different shift patterns to choose from: S1, S2 and S3.”

But! What’s unique about the DCT in the Africa Twin is a new G switch, which keeps the throttle and wheel more intact. For the standard modes, if you’re off the throttle the clutch will slip (more or less depending on which ride mode you’re in), but with the G mode it’ll slip a lot less, “which can be desirable in certain off-road situations,” so says the Honda press release.

It’ll also feature incline detection, which will keep you in a lower gear longer when it determines you’re riding up a hill or downshifts sooner when you’re going down a hill.

What’s missing here are a couple key factors, for instance price. While, the spec sheet listed looks great, it’s nothing we haven’t already seen (minus, of course, an automatic gear box on an Adventure bike). But that doesn’t mean it won’t be an amazing, nimble, fun, off-road powerhouse. This newly released spec sheet is still very promising. Take for instance a bike like the Yamaha FZ-09 or FZ-07—it may look the same on paper to bikes like the Suzuki GSXS-750 or the Kawasaki Z800, but the Yamaha feels far more exciting to ride.

It’ll come down to the ergonomics, width, construction and power delivery. There are some bikes in the category that are frankly terrible off-road, like the Suzuki V-Strom, so the Africa Twin could place well in the market. The RA staff is definitely rooting for the Honda to do well in the dirt.

What do you think about the specs listed? Read below and comment. Will it be a game-changer?

HSTC 3-levels + switch-off (DCT/ABS model only, not on STD model)

ABS 2-channel with rear ABS off switch (DCT/ABS model only, not on STD model)