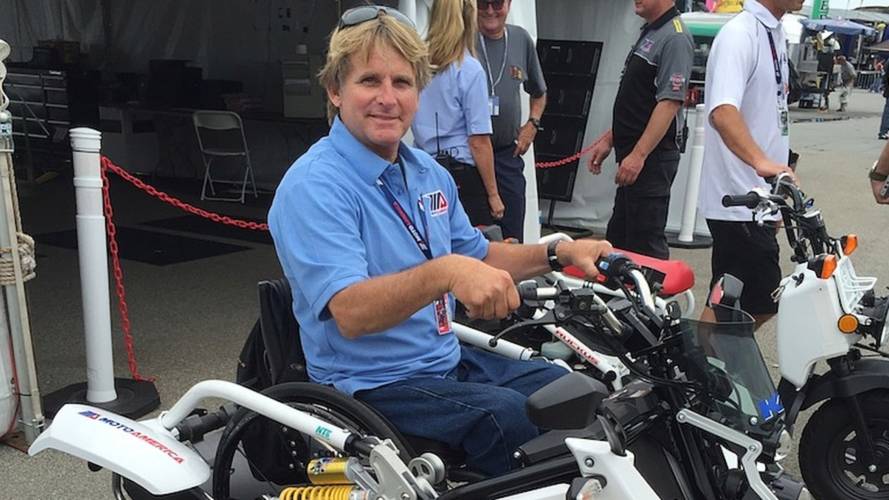 Wayne Rainey is a Motorcycle racing legend. He's a former GP road racer and 500cc World Champion who had fierce competition when he competed. If you head on over to YouTube, you can see some epic battles (the ones he had with Kevin Schwantz are my favorite to watch.)

I mean, just check this '93 MotoGP race at Suzuka out:

At the highlight of his career, he obtained three consecutive 500cc championships for riding for Marlboro Roberts Yamaha between 1990-1992. In 1993, however, Rainey's racing careers came to unfortunate halt when he crashed at the Italian GP race in Misano. This incident resulted in a broken spine, which left him paralyzed from the chest down.

Since his accident, Rainey hasn't permanently strayed away from motorized vehicles or racing for that matter. He's raced hand-controlled Superkarts in the World SuperKart series in California and he's very much involved in US road racing by being the president of MotoAmerica—a racing series that is sanctioned by the AMA and Federation of International motorcycling (FIM) to help revitalize moto racing domestically.

Most pit vehicles you'd see are bicycles, scooters, mini pocket bikes, small dirt bikes, etc., but nothing like this. Luckily Rainey has some good friends like Kenny Roberts who gifted him with a pretty rad motorbike that has three wheels and custom-made just for him.

When I asked Rainey what the occasion was—like if it was for his birthday or an anniversary of some sort—he said no, Roberts just surprised him with it (what an awesome friend).

"I got it about a month ago. He got it from a company in Japan that was a big fan of mine and they had a machine shop, so he designed it and made it for me," Rainey said.

As for what it's called, he's not sure, " I wish I knew the name, but I don’t." But that's okay, since it's one of a kind and technically can call it whatever he wants to call it.  As for the specs, it has four lithium batteries, gets about 30 miles on a charge, and goes about 30 mph.

READ MORE: On-Board Video: How to Get Around Laguna Seca on Jake Lewis' Superbike | RideApart

"It’s pretty light—it’s made out of aluminum. It's has three-wheel disc brakes, front wheel drive, and it’s electric so it’s really quiet," he explained.

He offered to show me how it worked. I asked if I could take pictures so I can show the process, which you can see below:

This is the front view with it opened.

Here's the back view and where Rainey pops on in.

View of Rainey popping on in.

Rainey then pulls the bars down.

And voilà! He's ready to rock and roll.

As for where he's ridden it so far, he said he only uses at the race track in the pits, and has no plans to ride it anywhere else.