How To: Riding in the Alps 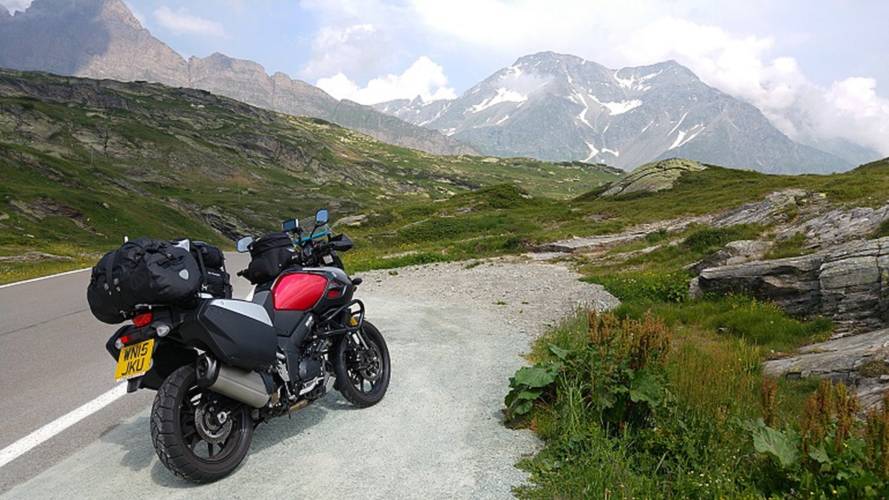 How To: Riding in the AlpsI had the incredible good fortune recently to undertake an epic European ride, which included stints in the Swiss, Italian,...

I had the incredible good fortune recently to undertake an epic European ride, which included stints in the Swiss, Italian, German and French sections of the Alps. I rode a number of famous mountain passes, including San Bernadino Pass, Great St. Bernard Pass, Albula Pass, Umbrail Pass and the famous Stelvio Pass (from whence the Moto Guzzi Stelvio gets its name)

The trip was, quite simply, the coolest thing I've done in my riding career (so far). The picture above is one I may have framed so I can stare at it when I'm frustrated and remind myself that life is sometimes really, really awesome.

I know it's not easy and it's definitely not cheap, but riding in the Alps should be on your bucket list. To help make it happen, I've put together the following "How-To" guide:

Get your head right

Before you set foot or tire in the Alps, work on getting yourself mentally prepared for being there— especially as it pertains to interactions off the bike. The Alps draw riders from everywhere, who play a big part in making the experience so memorable.

British and Dutch riders are the friendliest, Swiss and Austrian riders are (perhaps unsurprisingly) the most skilled, and Italian riders are the least sane. But you'll have a good time interacting with them all, as well as folk from dozens of other countries. Being on a motorcycle is open invitation to anyone to start a conversation.

Ever larger numbers of people speak English in Europe—especially younger people and those in cosmopolitan areas. In Switzerland, you'll occasionally find English on road signs, but it's basic courtesy to learn greetings and pleasantries for countries you'll be riding through. Work on developing the ability to speak English slowly and clearly without sounding condescending. And to that last point, never ever, ever be critical of another person's country. Ever. There's no point and it will not help you in any way.

This is doubly true regarding your attitude toward the place you are in. You're a bloody foreigner, son, and any opinion or attitude other than "this place is the best" will hamper your ability to have a good time. If there's stuff you don't like, keep it to yourself until you get home, or until you're amongst Germans, who have elevated criticism of other countries to an art form.

The best bike to ride in the Alps, of course, is the bike with which you are most familiar and comfortable. In my case, that was my own Suzuki V-Strom 1000. But I live in Britain. The bulk of RideApart's readership is in North America, so I'll assume you and your machine are an ocean away from the European Union.

I've heard of some folks shipping bikes across said ocean, but I can't imagine this being a terribly great option except in cases where you're planning to spend several months here. Even then, it might turn out to be cheaper and easier to just turn up and buy a used bike. Choose a Japanese model or BMW since dealerships for these are abound throughout Europe. Avoid Triumphs except in Britain; I've heard horror stories of people being waylaid for several weeks waiting for parts.

More likely, though, you'll want to rent. There are a number of companies offering different makes and models for hire. Google is your friend in finding them, and there are dozens to choose from. I'd personally avoid renting a Harley-Davidson or the like. Not because I'm a Harley hater (in fact, I think they're really cool), but because they aren't the right tool for the job, unless you possess an extraordinarily high level of skill in maneuvering big bikes in small spaces. Alpine passes are very twisty—very, very twisty. On the infamous Stevio Pass, I was touching down the hero blobs on my V-Strom.

Don't be afraid to go small either. There's no incredible speed to be had on the passes, and being able to muscle your bike will add confidence.

Obviously, the easiest route is to go with a tour operator like Edelweiss or Motorrad Tours, who will not only provide bikes, but also provide knowledgeable guides and itineraries that take the stress out of figuring out where to eat, sleep and ride. The drawbacks to this, of course, are that tour operators are not cheap. You can't change their itinerary, and you'll inevitably find yourself spending a week in the company of a Connecticut day trader who is going through his midlife crisis.

Although I'm an American citizen, I live in Wales, which is home to some of the best riding in the UK and several challenging roads. I hold my own here, but I'm not ashamed to admit that the Alpine passes kicked my butt. It's important to accept that the mountains are better than you and ride accordingly, rather than trying to match anyone else's perceived skill level or the vision you might have had for yourself.

Village marking border between Italy and Switzerland at Umbrail Pass

It can be humbling to be schooled by some French dude on a maxi-scooter, but the key to having a good time and avoiding any first-hand experience with European health care is riding within your own abilities. Keep in mind, too, those abilities will be diminished due to unfamiliarity with the terrain and the natural tiredness that comes with travel.

Pretty much any and every mountain pass in the Alps will provide some sort of thrill, as well as incredible views. Get a good paper map and a magnifying glass. The little tiny squiggles that look like something drawn by a 3-year-old are the roads to aim for. Within the Alps, terrifying public-service road signs featuring pictures of mangled bikes, skulls and coffins help identify which are the most fun routes.

It helps to have a GPS for the sake of navigating to and within towns. Europeans have an entirely different view of what sort of information is helpful when it comes to road signs. They don't do points on the compass (e.g., north or south), nor do they necessarily bother to tell you the actual name of the road you're on or the road you're approaching. Instead, they tell you which town a road goes to. This system demands a geographical awareness that you, as a visitor, are unlikely to possess. To this end, it's a good idea to build in large windows of snafu time into your riding plans. You will get lost.

Heading up San Bernardino Pass. Note the road is not wide enough for lane markings.

Season-wise, mid summer to very early autumn are your best bets for avoiding snow. Meanwhile, it's best to tackle a mountain pass first thing in the morning –– especially more popular passes like Stelvio. Firstly, this will help ensure there are fewer people on the road. You'll be thankful for this when you find yourself going wide on yet another ridiculously steep U-turn bend.

Secondly, it helps to tackle difficult passes when your mind is most fresh. They are mentally taxing experiences and demand a psychological gear change that can be difficult to make if you've been riding faster roads all day.

In addition to riding in the morning, it's also of benefit to ride on weekdays. As with anywhere and everywhere, weekends bring more riders, which bring more challenges.

Umbrail Pass is the highest paved road in Switzerland and it appears to have been built for sheep rather than any sort of vehicle. Taking it on at 8 a.m. on a Wednesday meant I had the road almost entirely to myself and was able to use the whole of it to my advantage on ultra-tight switchbacks.

You'll find no chain restaurants in the Alps, and depending on how Americanized your view is of the universe, you may find it difficult to identify what a restaurant looks like. I'll be honest that in certain small villages I would have been hard-pressed to explain the visual difference between a bar and somebody's house—beer signs help identify the former. Food is served in every bar I've ever encountered in the Alps. That is equally true of every hotel you'll see. Unlike hotels in American restaurants, the food here is usually good and usually affordable.

Occasionally you'll see food trucks on the roadside in Italy. Trust me, you want to stop there. If you ever see the word "Forelle" on a Swiss menu, ask for that, regardless of how much they're asking for it. It means "trout," and the Swiss have a magical ability with it.

In all cases, be prepared to wait a little longer than you might normally expect. Many places won't even have the food prepared until you ask for it. For them, this means they don't waste stock hoping people will show up, for you it means your meal is as fresh as it can be.

Grilled fresh Forelle and potatoes at Gasthaus Rofflaschlucht in Switzerland

The aforementioned hotels are to be found all along your route. These places are small, charming, and quite often from another time. Many don't have websites, making them difficult to book beforehand. That's OK, as they don't fill up nearly as quickly as you'd imagine. Start casually checking for vacancies around 5 p.m. and you'll almost certainly have found a spot by dinner time. Hotels are more affordable than you might think and it's a given that a full breakfast is included in the deal.

For my part, I prefer to camp. It's considerably cheaper (more money for beer at the end of the day) and it's the nature of European campsites that they can always make space for one more tent. Camping in Europe is different to the sort of camping most North Americans will be familiar with. It's far more akin to the "camping" you did as a child in the back yard. Many campsites have full restaurants. Most others have a small shop where you can buy supplies. So, you don't need to carry much more than your sleeping bag and a tent.

Campsites are easy to find, with road signs helpfully displaying a picture of a tent. Meanwhile, wild camping (i.e., outside of a designated area) is technically illegal in all countries. In Switzerland it will earn you a very stern talking to from the humourless military guys on KTMs who patrol the mountain back roads. In Italy, as with everything else, the rules are less likely to be adhered to. The French are equally laid back if you're intelligent enough to be inconspicuous.

I don't have much intel on how things work in Austria, but a standard European rule of thumb is that things get more and more relaxed the further east you go. Head to Slovenia and they'll probably let you sleep on the road if you're so inclined.