Why I Bought a Kawasaki Ninja 650 - My Second Bike 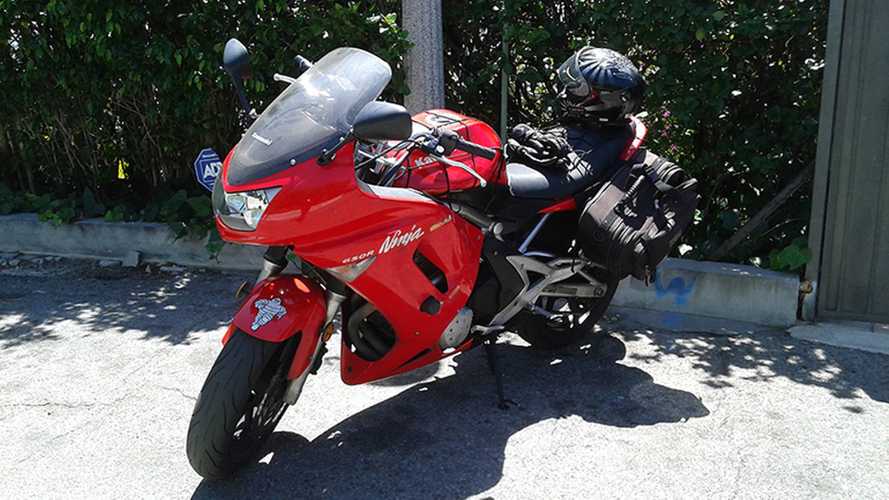 Why I Bought a Kawasaki Ninja 650 - My Second BikeFrom the time I started riding—learning on a borrowed Yamaha TT-R—the couple mentoring me had asked...

From the time I started riding—learning on a borrowed Yamaha TT-R—the couple mentoring me had asked when I’d be getting a larger bike. I hadn’t ridden 50 miles on my Ninja 250R before suggestions of a Harley Sportster, Ducati Monster, or some Japanese crotch rocket became their routine conversation-opener.

On group rides, people would often mistake my late model 250 for something larger, then try to persuade me that I needed a R6, Hayabusa, or some other “real bike.” My university ride club was aghast when I told them I was doing my 100 mile commute on the little guy. As a daily rider who frequents the freeways of southern California, I’ve been urged by all my more experienced riding buddies to get something with better brakes and a bigger engine.

As much as I would have loved a larger bike, I was resistant (I almost bought GSX-R750 as my first bike.) Even after I bought the 250, I drooled over 636s, MV Agustas, and Hypermotards. In spite of this, riding around on my 250 and reading up on cornering technique changed my mindset about displacement and what I ought to be riding.

Whenever moving onto a larger bike came up, I’d shrug and tell people I felt like there was so much I could still learn from my glorified scooter. I didn’t want to give it up and get something larger until I could ride it close to or at its limit.

When I finally did acknowledge interest in buying another bike, everyone was ecstatic. That is, until I told them I wanted to get a minibike to race at the kart track and keep the 250 as my street vehicle a while longer. It wasn’t that I lacked interest in other bikes.There are plenty of bikes I’d like to add to the stable: adventure, dedicated sport/track machine, dual-sport, trials, an old project bike. It just seems like a far-off goal for when I have the money to maintain and enjoy said bikes.

Then my dear 250 was forced into convalescence by a traffic accident that had me scrambling to replace him, at least as a daily driver. In spite of all the advice to get a something bigger, and the fact that I’d spent over 20,000 miles on my trusty 250, my first impulse was to pick up another small bike and call it a day. A cursory look at used bike listings, however, made me rethink that choice.

Comparing larger machines to the little bikes I initially favored, I quickly realized many of them were more affordable than the 250s and 300s—provided I was willing to consider older model years. Beyond that, insurance was often cheaper on the larger bikes, likely because many of them lacked the reputation for being “beginner motorcycles,” or “crashes waiting to happen” as an acquaintance in the insurance business told me.

The draw of a larger bike wasn’t simply financial, either. When I started researching different models, I found many were comparable in weight to my Ninja 250, but boasted front dual disc brakes. More stopping power? Yes, please! Even when I was more into cars, I always had a pet peeve about guys boosting or supercharging their vehicles without making adequate upgrades to their brakes and suspension. Seriously, what’s the point of having a bunch of power at such a high cost to handling? Similarly, I saw no reason for me to get anything that didn’t have dual discs when I was looking at something with more displacement.

I held out for a while longer, still looking at 250s and 300s, until I found out I could keep my old Ninja. Then it was if a whole different monster had been unleashed. The options seemed so broad. Did I get a larger dual sport? An old Monster? Maybe a new Yamaha FZ-07 or FZ-09? I even went through a phase where I was convinced I wanted a 650 adventure bike, preferably a BMW, and heck, why not just finance a new F800GS at that point? Fortunately, I came to my senses before signing any paperwork.

I managed to curtail my madness by reminding myself that my budget wasn’t just the price tag on the motorcycle. I had to consider daily operating costs, ease of maintenance, fuel economy, availability of parts, reliability, annual insurance, and a slew of other criteria. Beyond that, I didn’t want to wash out my bank account to the point where track days and long joy rides were out of the question.

In the end, I set my budget for the bike at a firm $3,000. I also made a list of criteria that my new to me bike ought to meet: fuel injection, dual discs brakes in the front, less than 30,000 miles on the odometer, 40+ mpg average fuel economy, nothing too difficult or expensive to work on, and something I could sort of stand up with using one foot mostly on the ground (in the last endeavor, I may have failed). I was also partial to something sporty, though I was more flexible on this last criteria, given the bike would to be a commuter.

Eventually I settled on two models: some older versions of both the Suzuki SV650 and Kawasaki Ninja 650R. I liked the naked styling of the SV650 with the single round headlight in front, but still was considering the Kawasaki, since people reported better fuel economy from it and insurance was notably cheaper. The SV sounded more fun, but the Ninja seemed the sensible choice.

I hunted the classifieds and contacted sellers aggressively. Then I tossed my gear in a messenger bag, strapped my helmet to it, and hopped on my skateboard. Few things have frustrated me as much as using a combination of public transit and my skateboard to transverse Los Angeles, only to have a seller flake out or raise the price once I showed up in person. This happened with every SV650 owner who actually returned my messages and emails.

Finally, I found a seller who not only called me back, but also was ready to set up a meeting time within the week. The bike was a 2007 Ninja 650R with under 14,000 miles on the odometer and just within my budget. Sure, it was rough around the edges and may have needed a little love, but the seller didn’t give me the run-around, and was willing to negotiate on the price. Looking at it in person, I shrugged at the scratches and considered them “theft deterrent.” Besides, I figured it meant I wouldn’t feel as bad if I dropped it.

Was I ecstatic about my new bike? Not really. However, it does seem like the right tool for the job, and maybe one day I will grow to love it. For now though, practicality trumps passion, and I just have to remind myself that money saved daily can be thrown at repairing the 250 and prepping it for the track.