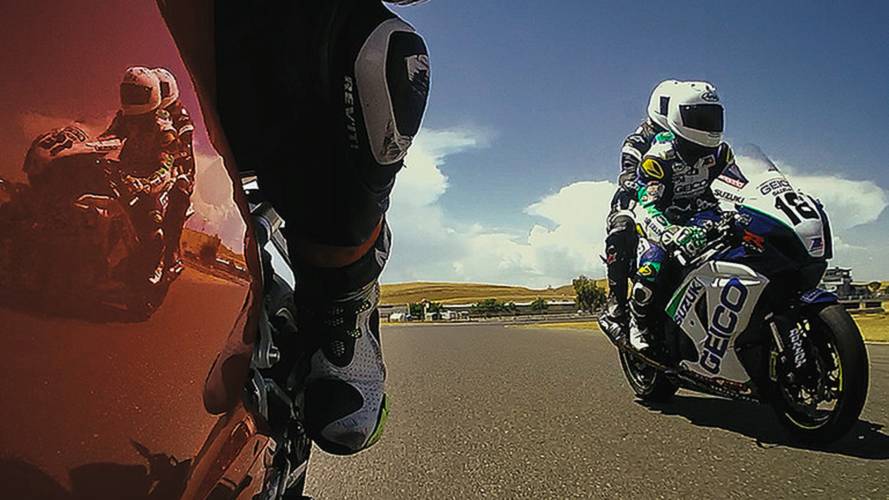 Arai Helmets set-up a track day at Thunderhill Raceway to give both journalists and pro racers the chance to test Arai Corsair-X on a real race course.

EVEN TWO-UP, GEICO SUZUKI, SUPERBIKE PRO, Chris Ulrich is WAY Faster than Me

Assembling a group of journalists, Pro-motorcycle racers, distributors and VIPs, Arai set-up a track day at Thunderhill Raceway in Willows, California and giving everyone in attendance the chance to test out their new top-of-the-line racing motorcycle helmet on a real race course.

The Corsair-X is the latest in a long line of highly acclaimed racing helmets from the Japanese manufacturer, Arai.

Here's a compilation of a couple laps I made around the track at Thunderhill wearing the brand new Arai Corsair-X—just like the pros wear. Let's see if wearing it makes me fast like them:

To up the ante, Ducati was at the launch event with a fleet of new 899 Panigale's and Pirelli was on hand to supply Diablo Corsa tires and support for the day.

We weren't sure if this was an official Ducati technician, but no one seemed to mind.

Between laps, a Pirelli rep was on hand checking tread wear and tire pressure. Remarkably, the Ducati's were outfitted with Pirelli's street-sport oriented Diablo tires. Once warmed up, they performed like track-specific race tires. Impressive.

And if all that wasn't good enough, Alpinestars was also there with a truck full of race gear available for anyone who may have forgotten their kit at home.

It's no coincidence that many top professional motorcycle racers wear Corsair helmets. When it comes to safety and protection, Arai helmets are some of the best available for both professionals and the rest of us.

Hot on the heels of the Laguna Seca WorldSBK and MotoAmerica races that took place earlier that weekend, a number of big-name pros made their way to the Arai event to pick up their very own Corsair-X.

18 year professional racing vet Chris Ulrich, prepares to humiliate me on the track.

While getting to spend time in the company of pro racers is in itself a privilege, getting to share track time with the truly fast is another thing entirely. While I'm accustomed to to getting passed at races, there's something extra special about a being left in the dust by a professional racer who's carrying a passenger. Or blowing past you while doing a 140 mph wheelie down the front straight. Or coming around you on the outside of a turn while backing the rear wheel through at north of 100 mph.

Elena Myers is the the most successful female racer in the history of professional road racing in America. Super friendly and approachable, Myers is stepping up to the premier MotoAmerica Superbike class for the first time in 2015.

We'll have a full review of the Arai Corsair-X Race Helmet posted soon, but suffice to say, the X has managed to improve on its predecessor, the Corsair-V in almost every way.

The author Jim Downs, looking fast at least, puts the Arai Corsair-X to the test on the raceway at Thunderhill in Willows, California.

The Ducati 899 Panigale has no problem winding up to nearly 130 mph on the front straight at Thunderhill. It's only held back, but its rider and author's lack of nerve into turn 1.

Ducati even included a white 899 Panigale for us to ride, if red wasn't your thing.

For those who prefered larger displacment, Ducati was kind enough to offer-up a 1299 Panigale. Most of us in truth we're perfictly content with the 899's available.

And one more time... The author, getting totally owned by Chris Ulrich aboard his passanger carrying Suzuki Superbike.