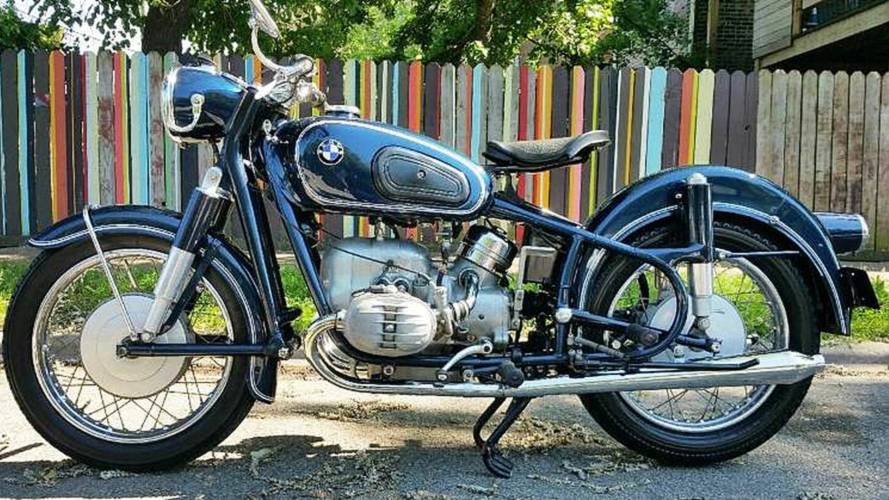 Online Find Panjo Edition - BMW R60 "not a /2"This week we have a nice example of a 600cc BMW that you will be forgiven for thinking of dates back to...

This week we have a nice example of a 600cc BMW that you will be forgiven for thinking of dates back to the days before the war. It looks like it has low miles and appears to be well sorted, though you will pay dearly for the time travel back to 1961.

If you don't know anything about the history of BMW motorcycles you might think this bike dates back to before WWII, but in fact this example was made in 1960, and the /2 series was still being made in 1969.

While Triumph was selling the Thunderbird and even Harley Davidson had the sporty Sportster, BMW trundled along with an evolutionary version of the same bike that helped lose the war.

Understandably, BMW was not in the greatest shape immediately post WWII, and did go back to producing the very same bikes as before. The bikes in the poster from the early 1950s were actually reverse engineered from pre-war bikes because EVERYTHING had been destroyed in the war—the molds, the blueprints, the prototypes, the factory, everything.

When the new bikes for 1956 debuted (called /2 by most people, but not officially called that until 1961), it was the next generation of those bikes. And yet, they seemed to be moving backwards, going from a telescopic fork to a leading link Earles front end—though the new bikes did get an enclosed driveshaft.

At the time, this meant that BMW was the bike for old fuddy-duddy's, long distance touring, and sidecar duty (mounting points were built into the frame by the factory.) Here in the 21st century, this means that you can ride a pre-war looking bike (and chase your friends on their Triumphs, playing "Great Escape"), but only have to suffer with 1960s reliability and parts scarcity issues.

I'm sure many MBA papers have been written by the hipper, edgier MBA students about the dramatic turn around of BMW motorcycles in the 60s under former Porsche engineer Hans-Günther von der Marwitz. And I'm sure those papers all compare the "Toaster Tank" 1970s models and the uproar they caused with Bob Dylan's "going electric" because both caused the same reaction from their fans.

Just a few years after that, BMW introduced the 1976 R90S as a state of the art sportbike and was beating everyone in the American Superbike racing series. And to think they considered giving up on two-wheeled vehicles completely in 1964.

If you're in Texas and seek an antique retro bike with typical German engineering and attention to detail, you could do much worse than this "built in 1960 but titled as a 1961 BMW R60 don't call it a /2." Sure, it only has 30hp and a plunger type rear suspension, but that doesn't make it any less fun to ride (slowly).

Here's how the seller describes it (briefly, as he does go on):

This is the last year before introduction of R60/2 models. It is a very nice and all serviced up bike. I have notes of the service work that have been performed when the bike was last torn down for maintenance. All bearings in the motor and tranny have been replaced. Bike starts easily and runs with that nice bottom end torque and minimal vibrations. It is a pleasure to take it for a spin on Sunday morning coffee run.

The description continues: "Bike was originally sold in 1961 hence it was titled as 1961 and that was a common practice back in the days.

Matching frame, engine, tag and title numbers. It is a very honest bike, one of the nicest riding and looking pre-1970 BMW bikes I have ever ridden."

Click over to view it here, and read the other four paragraphs of description. The seller doesn't mention it, but the whole bike appears to be a dark blue (not the more typical black). One more note: Guys who buy expensive BMWs all seem to also own really good cameras from what I've seen online; these are not your typical potato pictures.

MUST READ:  5 Things to Check Before Calling a Tow Truck | RideApart