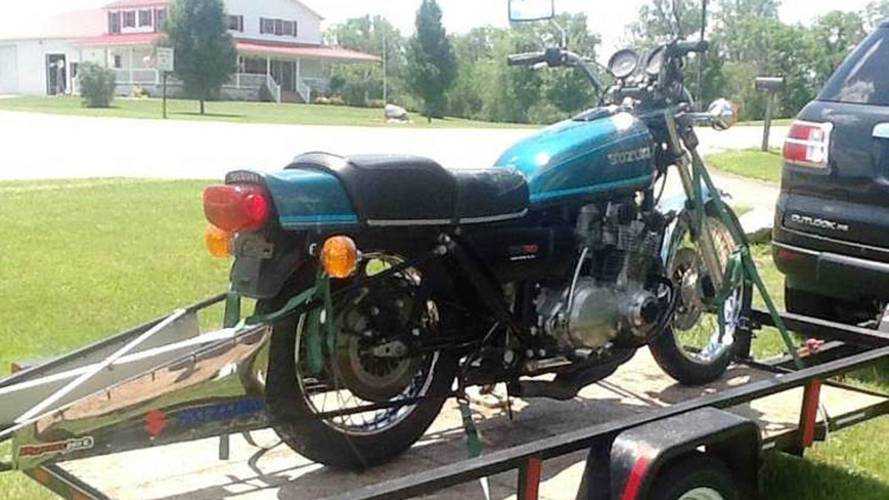 Online Find Panjo Edition - Bargain Classic Suzuki GS750This week's bike is the opposite of the other week's—this is not a rare and exotic piece of...

This week's bike is the opposite of the other week's—this is not a rare and exotic piece of Italian hardware that will cost you dearly. This week is a bargain priced, so called, universal Japanese motorcycle (UJM): a 1979 Suzuki GS750 listed at just $1000.

There is only one picture from the seller, and not a whole lot of description either, so we just have to go on the bulletproof reputation these bikes have. You also get a free drag bike wheelie bar with your bone stock 60hp Suzuki. The bike looks to be an unmolested example and if it kicks over and feels like it has compression, you could probably be riding it after only a days fiddling. If it already runs, then $1000 is a super price on such a clean looking bike.

Except for the exhaust system—it looks just like the bike in the original brochure.

The Suzuki GS750 came out after the Honda CB750 and Kawasaki KZ900/Z1 had already been on the market for a few years. It weighed less than either bike by a good amount, made more power than the Honda, and not much less power than the Kawasaki. Part of the reason for this was that Suzuki had no real 4-stroke experience, so they bought and copied the best features of these bikes, then added some of their own. In fact, the top end of the Suzuki uses the same size valves and the same cam timing as the Kawasaki.

But unlike the other two Japanese 4-cylinder bikes, the GS750 set a new standard for braking and handling.

Both the CB750 and Z1 were known as bikes that were fast in a straight line, but real pigs when it came to the corners. Bob Lutz, formerly of GM, Chrysler, Ford and BMW famously crashed his CB750 racing an underpowered airhead in 1969 because he just couldn't get it to corner.

The Suzuki fixed all that. They studied the British bikes and copied the geometry and frame design of some of their best handling models. On top of that, the Suzuki front disc brake features a true sliding caliper (unlike the Honda) and it had extra metal to keep it from flexing and distorting under use (unlike the Z1), so the brakes were some of the best around too.

So if the GS750 is a better bike to start with, has spoked wheels, twin shocks and a kickstarter, and a lower used cost these days, why aren't the hipsters buying them and going full cafe racer on them? Beats me. Could be they just have no idea what they are doing.

If you're in Ohio and looking for a good used bike that is unarguably a classic for less than $1000, you don't have to look any further than here.