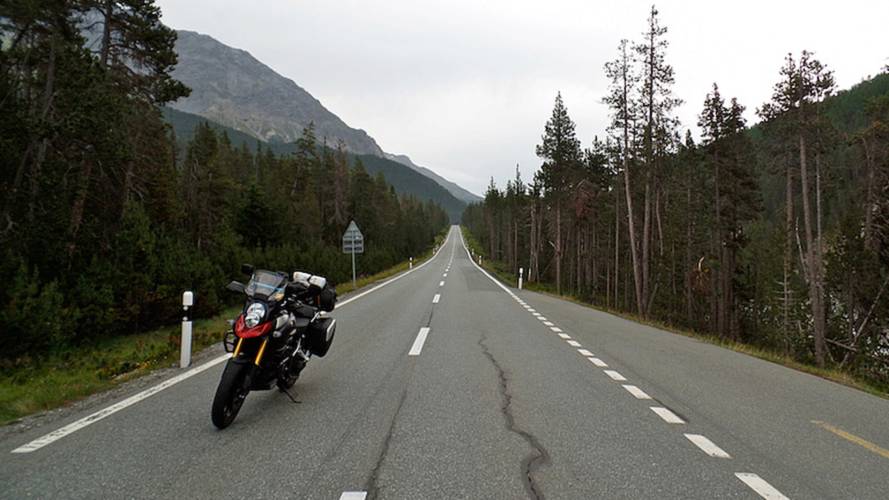 "Harley," says the grinning Russian, pointing first at his motorcycle, then himself. "HOG!"

His female companion offers a frenetic grin and thumbs up.

It's day five of my European road trip (Read Part 1 of the trip here). I'm stopped at a gas station just north of the Germany-Switzerland border, trying to decide where to place the vignette on my bike.

A vignette is a sticker required when using Swiss motorways. Get caught without one and you'll face fines upward of 200 Swiss francs (US $205). The instructions are in German, Italian and French, so I don't have a clue where to put this thing. The Russian and I confer through gestures and grunts. Eventually we agree to disagree; I place the sticker on my windscreen, he chooses his fork.

With more gestures and broken sentences he communicates they are traveling from Moscow to Madrid for a Harley Owners Group meetup. Madrid! In this heat? On that bike? Good lord.

The continent is in the grip of a heatwave. Heat is always dangerous in Europe; almost no buildings have air conditioning, and bafflingly, few of the continent's cultures use fans. There is no escape, especially on the road. The sun is a cutting torch. Oven-like heat bounces off the road surface. It is mind-bending and unrelenting. I'm forced to stop every 45 minutes or so to gulp whole bottles of water or ice tea—it's hell.

The bike, however, is doing just fine. The LCD dashboard on my Suzuki V-Strom 1000 tells me the engine is running no hotter than it would on a British winter day. Unfortunately, it manages this by pouring all the heat of the engine and the road and the sun and every other hot thing onto me. The heat is liquid in its omnipresence, like riding through lava.

I tell myself things will improve when I reach Switzerland's higher ground. I'm wrong. The only respite comes in tunnels; within them, slightly cooler air and a break from the sun. The longest tunnel I encounter is 12 km (7.5 miles) long. It's bliss. I consider pulling over and setting up camp inside.

In Mother Russia, Harley rides you.

I push on, trying to reach a restaurant I've heard about in time for lunch. I arrive shortly after 2pm, starving, exhausted and delirious. I have reached peak discomfort: I'm dehydrated, my head hurts, and I'm developing saddle sores. My feet, lower legs and knees burn from the bike's heat.

I sit outside in the shade with a pint of Coke and a pitcher of ice water. After a few minutes, I start to feel human again. The beauty of my surroundings starts to process. The gasthaus is set next to a winding mountain road that cuts through thick pine forest. The air is intoxicatingly fresh and pleasantly cool when away from the direct sun. I take in deep, happy breaths.

The woman running the gasthaus places a whole trout and potatoes on an outdoor wood-fired griddle. Soon, the smell of it has me clapping in anticipation. This is the kind of experience you live for; the kind of story you hold on to for the sake of telling it at a high school reunion.

After lunch, rejuvenated, I decide to tackle San Bernardino Pass. It will be my first experience riding an Alpine pass and afterward, in the journal I'm keeping for this trip, I will write simply: "Jesus F***ing Jones. Beautiful up there, though."

I live in Wales where there are no direct routes –– just narrow, tight-cornered roads that draw motorcyclists from all over Europe. The fact I've ridden thousands of miles there without dying had led me to believe I was prepared for the Alps. I wasn't. The Alps are a level beyond.

Narrow and excessively steep, the route through San Bernardino Pass is littered with psychotically tight switchbacks. It feels like high-stakes moto gymkhana. Almost instantly, I allow myself to become unsettled. I goof every bend: running wide, operating the clutch with no finesse, sloppy throttle, consistently choosing the wrong gear, and too often looking where I don't want to go. Once, I almost ride straight into a boulder. Twice, I'm forced to rely on the skills of oncoming drivers to avoid collision.

Somehow I manage to make it to a roadside vista, halfway up the pass, without crashing. I stop, get off the bike, drink some water and pull myself together. Be still. I dig deep in my brain to recall every riding tip I've ever read, seen, heard or experienced. I mentally work out what I need to improve upon and set off again.

There isn't much traffic, which is lucky; I still run wide on some bends. But by the time I arrive at the top of the pass, I'm feeling more confident. Things are easier above the treeline because I'm able to see more of what's ahead. Again, praise for the V-Strom is due, with its traction control and slipper clutch helping to keep me upright despite a number of idiot downshifts.

Heading down the other side of the mountain, I manage something close to a rhythm and am feeling pretty good when I reach civilization. But I'm ready to call it a day; the pass has worn me out. I point my bike toward Zernez, a village near Switzerland's only national park. A campsite on the village's outskirt will be my home tonight.

Somewhere on the road to Zernez. Maybe.

But first, I get stupidly lost. Well, not so much lost as confoundingly rerouted—construction blocks one road, and thereafter my GPS becomes desperate to turn things into Mr. Toad's Wild Ride. Which is how I end up on Albula Pass –– even more intense and ridiculous than San Bernardino Pass. In part because certain sections don't appear to have been repaved since Adam Sandler was funny.

The plus side, though, is that I come across a farm stall where I'm able to buy provisions for the evening: eggs, an aromatic Gruyère-style cheese, bread, jam, and some stale croissants thrown in for free. I make it to my campsite just five minutes before the office closes.

I'm up at sunrise the next morning, watching the last gasps of a thunderstorm blow through. I brew a large pot of tea to wash down the croissants and jam. The fresh air, the cool morning, the roar of the nearby Inn river, and the mountain scenery collude to do that outdoors thing of leading me to believe my pauper's breakfast is culinary bliss: "Man, this is good. I mean: really, really good. Two stale croissants and a liter of tea is going to be my new thing. I'm going to have this for breakfast every day."

I'm on the road by 7:30 a.m. There's a long day ahead: just shy of 400 miles to cover. And the first part of that involves tackling the infamous Stelvio Pass. To some extent, I use the word "infamous" in the Three Amigos sense ("Dusty, infamous is when you're more than famous."). The pass was once named by Top Gear as the greatest driving road in the world. Its reputation is such that Moto Guzzi named their adventure motorcycle after it.

According to the unimpeachable Wikipedia, Stelvio Pass contains 75 hairpin turns. I can find no information about the number that aren't hairpin, but I assure you there are a lot. Add to this the equally daunting turns and bends of Umbrail Pass, which I take en route, and the whole thing is pretty mentally taxing. For my money, Umbrail is more terrifying. The road surface is poor, it is mostly single lane and much of it is sans guardrail. Putt-putting along in second gear beside a sheer cliff I feel like those L'équipée girls riding in the Himalayas. But, you know, not quite as sexy.

At the top of Stelvio I stop to take pictures and run into a group of British riders on an extended bachelor party (what the Brits call a "stag do"). There are about a dozen of them, wearing fluorescent yellow T-shirts over their riding leathers. On the back of each shirt is the rider's nickname within the group ("Gazza" "Stiffy" "Rent Boy"). On the front is the epigram: "KEVIN IS A C*NT."

They spot the GB plates on my bike and run toward me as if I'm a long-lost member of the group. Only one of them isn't wearing a T-shirt; Kevin, I presume. I suffer a sympathy hangover just looking at him. He looks as if he has been dragged up Stelvio, thrown off the side and dragged back up.

"Bout time we had some proper weather," one of them says, nodding at the morning grey.

It's lightly raining and about 15C (59F). For the first time in almost a week I'm not dying from heat. We commiserate that our gear is suited to the British climate, rather than continental Europe in a heatwave. Some time later, I will read in RiDE magazine that wearing too much gear on the continent is a notorious British rider mistake. I guess I've been assimilated. Which might explain why, despite the rain, I don't bother to zip in my jacket's waterproof lining. I'm happy to let the wet seep through just for the sake of not being hot.

Six hours later, I'm far from the mountains, standing in the middle of the autostrada on the outskirts of Modena, Italy. My textile riding suit is damp once again, this time with sweat. A semi truck has jackknifed across the motorway. I've filtered (aka "split lanes") through about a mile of stopped traffic to arrive at the wreck and be told by a police officer I can go no further.

"Where you go, eh?" he says, shrugging his shoulders in stereotypical Italian fashion.

He's right. The truck has turned so completely it is touching the guardrails on either side of the road. It is 39C (102F). Not a cloud in the sky. No shade.

Stuck on the autostrada

"How long do you think we'll have to wait?" I ask.

All the vents on my jacket are open but I don't take it off. Exposed skin causes rapid dehydration. I do my best to ration my remaining 500ml (16oz) bottle of water. I consume it within 5 minutes.

Sweat is pouring out of me like I've sprung a leak. I can feel it running down my legs in rivulets. The sun stings my face. Heat radiates from concrete, metal, and the idling engines of the cars and trucks.

"Well, this is what it would be like in Austin," I tell myself.

Ever since my grandmother died I've been daydreaming of moving back to Texas, fearful of losing touch with my roots. My wife, English born and bred, has vetoed the idea. Last time we visited my family, she ended up in hives because she refused to believe me that chiggers are a real thing (Google it).

I call her and tell her I'm 125 miles away and have no idea when I'll be arriving. She, her best friend and family have been at a villa a few miles from Volterra since last week, having flown rather than travel by land. The spacious seat on my V-Strom has improved my wife's attitude toward being on a motorcycle but not enough that she was willing to travel such a distance as pillion.

I explain my situation and suggest that in this case she probably made the right decision.

The third and final part of this European adventure coming soon...