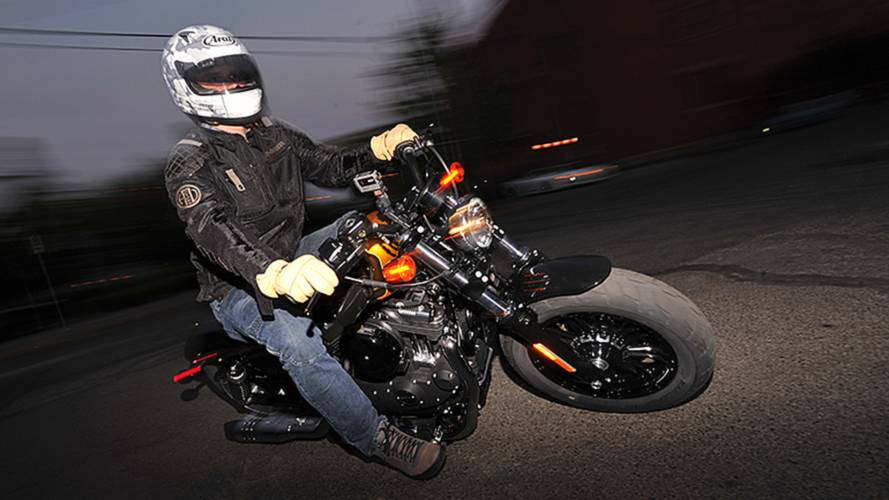 We test two Harleys and like them pretty well.

In all honesty, Harley-Davidson greatly overhyped themselves for this event. Making out as though they had huge news to unveil with their live streaming through Periscope, teaser videos, and huge emphasis on embargo. The hype would have been more adequate for say... an announcement that Project LiveWire was going into production. That being said, there were plenty of news-worthy items being announced, despite no specific new model being unveiled.

For 2016, Harley made changes to previous models after media and customer feedback. They introduced the most powerful lineup of Harley-Davidsons ever, two new Softails offerings and some serious Sportster upgrades. So, overhyped or not, there’s some cool things coming to the 2016 lineup. We had the opportunity to try out two of the new upgrades: the Sportster Forty-Eight and the Street 750.

This is newsworthy material only if you’re a Harley fan, if not, allow me to take a moment for you to run to the comment section to complain about Harleys after you clicked on a story titled: "We Ride the 2016 Harley-Davidson Sportster and Street 750."

Done yet? I can wait... Now, if you do care about Harley motorcycles beyond just the branding, here’s what’s important from the 2016 lineup:

“Riders have long since complained about the lack of suspension with Harley. Here’s our answer," said Ben McGinley, Harley-Davidson's Designer/Stylist and the kid (he's 27) behind the design of the new Forty-Eight, about the new heavy-duty suspension on Harley’s flashy Sporty.

The most notable and noticeable improvement has to be the gigantic 43mm front forks; a size that rivals some inverted fork setups, but still uses standard telescopic forks. They also brought the rake closer to the bike via the triple trees resulting in a 28.7 degrees, compared to a standard Sportster's 30.2 degrees. This made for a tighter turn radius and more agility/handling comfort at low speeds, further emphasizing the “urban” moniker the Forty-Eight has always had.

The new Forty-Eight features cast wheels over the spokes in previous models, losing a total of eight pounds in rotating mass. The cast wheels resemble those sought after seven-spoke mags.

The triple trees are bigger than before, further showcasing the fat front tire. I never liked that big front tire on Harley’s former smallest bike (that title goes to the Street line now), but with the bigger forks and trees, it seems to work from a visual perspective. Now, does it actually handle better?

We spent only an hour on the Forty-Eight around town, and it felt smooth and lived up to the hype. The hydraulic clutch is heavy as all Harley’s are, but the throttle response is on point and easily manageable. The clutch could still stand some finer engineering as it shows problems when the engines ran hot.

The front end does admittedly have a heavy feel to it, but lighter than you’d think after merely looking at it. Not as heavy as a full size bike like a Dyna, but certainly heavier than an import competitor or a Street.

The lack of rake makes the turning radius comfortable, but as to be expected—it still drags pegs. That’s a big bummer around town. The suspension felt like it had significantly more travel than before, but according to Harley it features the same travel numbers (although they didn't publish them). So it fed up potholes and bumps with no problem, it always felt planted in the corners, and it was overall a big improvement for Harley. For the short time we spent on the bike, we were ultimately impressed with the beefier suspension.

The Iron 883 also received some upgrades for 2016, mostly visual along with a more cushy seat and better tuned suspension.

The seat was also an upgrade with some cushier padding; add that with the bars and it made for a surprisingly comfortable ride. Normally, that look of forward controls with low slung bars is a back breaker and a terrible—just terrible—design that does nothing but make you sick from riding. Luckily, this was not that. The flipped mirrors helped to make the bars look lower than they actually were. Although, if I owned one, I’d certainly install mid controls.

The bar/seat/forward controls combination tip toes on the point between comfort and cool. We only spent an hour on the bike, but I’d say any more time and you’d be sore in the back. Mid-controls would mostly solve this issue.

This bike was more fun to ride than I expected, I don’t say we, because we’ve reviewed the bike before. The rumor is that sales are struggling in the United States, but during the presentation a Harley rep made an emphasis that the Street series is a global brand, insinuating that they were selling better in other countries.

"It's for the new rider, also those new to the brand, but it's also a bike built for the global market," said a Harley rep.

Import competitors do beat out the Street series in price and power mostly, but ignoring those important things, the bike is nimble and capable of mostly any type of street riding. It’s also really fun to throw into a corner. Mid-controls, skinny flat seat and wide bars put us back into that sportbike, knee-out kind of riding as we climbed in elevation through Skyline Dr. over Portland.

The upright seating position still managed to make you feel in the bike and not on top of it. You can see in the pictures that although I’m 6’3”, the bike doesn’t look all that small from the saddle. The bars and mid-controls were spot-on perfect—making the bike feel like a bigger model, in terms of comfort, but still nimble. It was harder to drag pegs on the Street with its 5.7 inches of ground clearance compared to the 883 Iron and Forty-Eight Sportster which feature 3.9 inches.

The water cooling ran warm in town (that's just from feel, no warning lights lit and there's no water temp gauge), but felt nice once we were up to speed... like say... an air cooled engine. I still don’t believe Harley has the water cooling down to a formula that’s better than their air-cooled design, which they’ve had time to prefect. The engine may have ran cooler than an air-cooled V-twin, however, we've never tested that, but to the rider it felt hotter.

The biggest change for 2016 would be the brakes, which feature identical front and rear 300mm rotors, bigger calipers and a new master cylinder. Overall, they did a great job stopping with no major complaints.

The engine is lacking on power certainly, but the torque curve was tame and simultaneously fun. A Hooligan in a can. I wanted to punch it at every stop light and wheelie across train tracks like Thor, but it wasn’t going to be enough power or loud enough to get me a reckless driving ticket. It could wheelie though (see above). Thor's custom flat-track 750 features a stock power train.

Luckily, these changes did not bring a significant price increase. The MSRP only went up $50, and the 2016 Harley-Davidson Street 750 retails for $7,549.

As much as I want to slam Harley for their overly-hyped marketing efforts, you can't really blame them. H-D is constantly talked about, but one thing they are undeniably great at is marketing their brand.

At this launch, every journalist rode roughly three to four bikes. Normally, if another brand’s bike simply received brake upgrades, like the H-D Street 750, that other brand wouldn’t include it in a launch and maybe not even in the loaner fleet. It would simply go unnoticed and a press release would be sent out. Instead, the journalists are all talking about the Street's small upgrades, even if it's only for a moment.

Harley featured almost every model on the launch. I found myself riding a Dyna Lowrider for no reason other than the fact that I love that bike. There’s nothing new to announce, but here’s a picture of me on it that I’ll share (people paid attention to their live streams.) They had guys like Thor Drake of See See Motorcycle host our reception along withe live first-ride video. Say what you will about Harley, but they know what they’re doing. It’s why they’re still here after 112 years.