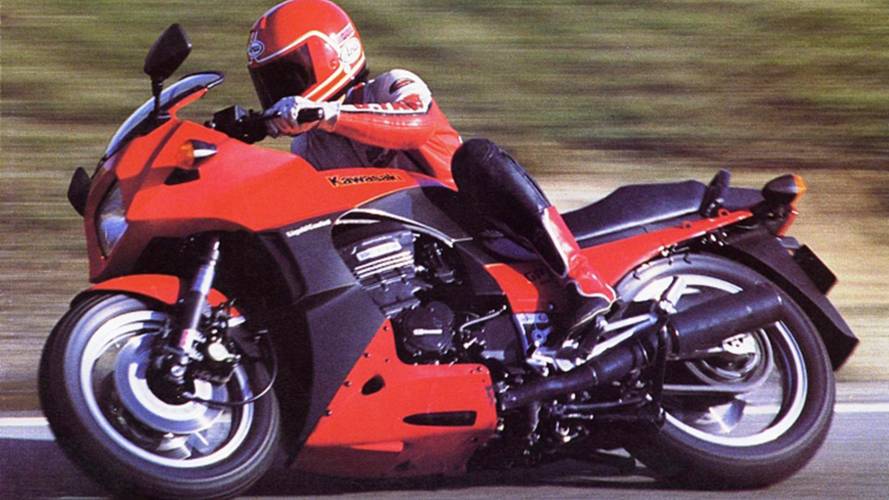 Kawasaki Open Class History – Part 2: Enter the NinjaIf you read part one last month, you know I left off with Kawasaki still producing an air cooled...

If you read part one last month, you know I left off with Kawasaki still producing an air cooled 1100cc 4-cylinder with architecture dating back to the late 60s. Sure, the GPZ1100 had a mono-shock and competitive torque and power, but Honda had already introduced the perimeter framed, liquid cooled, V4 Interceptor/Sabre/Magna lineup that made them look like dinosaurs. But just like they did in 1973, Kawasaki was about to advance the evolution of sportbikes by one giant leap when they introduced the all new for 1984 GPz900 Ninja.

While many parts of the new bike were conventional—like the wheels, suspension and brakes—the motor and frame used everything Kawasaki had learned in years of racing to correct issues inherent in the old air cooled bikes.

The motor was a liquid cooled, compact design, with 4-valves per cylinder and dual overhead cams operated by a chain on the left side of the motor. It was more compact than the old air cooled lumps, with a shorter stroke that allowed it to mount lower down in the chassis.

The frame was a conventional steel tube design, but the engine was now a stressed member, which provided a more solid connection between the steering head and the swingarm pivot. Though these were certainly not light weight bikes (weighing in at over 500lbs), the light weight revolution didn’t start until Suzuki created  the GSX-R in 1986.

These Ninjas were the first production motorcycles to have a top speed above 150mph. Right out of the box, Kawasaki entered them in the Isle of Man TT and got first and second in their class.

Kawasaki sold them in the USA until 1996—with not a lot of modifications—and until 2003 in Japan. John Bloor and the engineers at the new Triumph were so impressed by these bikes they basically reverse engineered the first Hinckley 900 and 1200 motors from the original 1980s Kawasaki designs—with a few improvements.

Prices today reflect that these bikes were all ridden hard and put away wet, with an excellent condition one going for nearly $5,000 according to N.A.D.A, though you can get a good condition bike for less than $2,000.

And of course, for men of a certain age, this bike will always be associated with the movie Top Gun.

In 1985, Kawasaki took that Ninja motor and created one of the greatest factory straight line bikes ever with the Eliminator 900. To me, it looks like a cross between the old air cooled LTD cruisers and a home built Kawasaki chopper. I’d much rather cruise to bike nights on an Eliminator than on any V-twin powered Harley knock off. Unfortunately, the market doesn't share my enthusiasm, with excellent condition bikes selling for about $2,500, and later 1000cc 1987-88 models selling for even less.

Called the GPZ1000RX Ninja in some markets, this bike was just an evolution of the original 900 design. It's more powerful and faster, but also slightly heavier. The chassis, however, was almost all new. Instead of a conventional steel tube chassis, the new 1000 used a square tube steel perimeter style frame—plus a stiff aluminum swingarm.

These bikes were not as successful as the original 900 Ninja, but were faster in the right hands. The N.A.D.A. guide says you can get an excellent used one for about $4,000 and good condition ones are still over $1,500, so they must still have a following among (the good kind of) speed addicts.

MUST READ:  The Distinguished Gentleman's Ride is Fast Approaching | RideApart

There is no real way to pin a value on these bikes because they were made for so many years. This is the Kawasaki touring bike with the heart of the Ninja and its shaft drive.

In 1986, Kawasaki was aiming squarely at the sport touring market that BMW had pretty much dominated. The Concours make good commuter bikes and can even be fun to ride, though they are heavy. Being touring focused (with factory removable hard bags) most of them had adult owners and were well maintained, unlike the Ninjas. Good condition 1986 versions go for less than $800, while the 1990s go for a little more than $1,000, and the 2000s for about $1,500.

You may have started to notice a trend here—the relentless march of progress is speeding up. The latest and greatest bike can’t hold onto that title for more than a year or maybe two before the newest thing comes along and is even better.

The 1988 Kawasaki ZX-10 was an all-new design and features a modern aluminum perimeter frame like you would expect on a modern sportbike. The motor made more power, the chassis handled great, and the brakes and suspension were new and better too.

If you're my age (a young looking 40-something, but I can play a world weary 30-something) this is the bike that sticks in your mind. Kawasaki built one of the all-around fastest, easiest to ride, predictable, and comfortable road burners in 1990 with the introduction of the ZX-11, and kept making it with minor improvements for more than ten years.

You may think they were lazy, or resting on their laurels, or decided 175mph was as fast as anyone needed to go, but you can’t argue with the fact that for six of those years, there was nothing faster on two wheels. Stock ZX-11s could run the 1/4 mile in 10 seconds and change at over 130mph with a skilled rider.

One of the great things about the ZX-11 is that it is all day comfortable, and can cruise at arrestable speeds with a two-up and with soft luggage until you run out of gas. The motor’s 145hp is as much as anyone will likely ever need, and it comes with a wide powerband and loads of torque. Excellent condition early bikes go for just $3,000 and good ones for $1,700. The 1993 and later bikes were slightly improved, and excellent condition ones go for $4,500 though oddly enough, good ones sell for just $1,300.

There was also a more relaxed, less sporty GPZ1100 based on the same motor as the ZX-11. Produced for just a few years, it has a more upright seating position and slightly less power. It did not really catch on, and good used ones sell for just about $1,000 and top out at $3,000 for excellent examples.

With Honda making the CBR1100xx and Suzuki coming out with the Hayabusa, Kawasaki had to respond with a better, faster open class bike.

The 2000 Ninja ZX-12 was much more of a sharp edged sportbike than the ZX-11, and of course, it was faster and better handling. Power is up for some debate though, because threats of legal action from Europe lead to Kawasaki restricting them. Some sources say they make 160hp (at the wheel), while some have tested them and report up to 178hp.

All ZX-12s are restricted from the factory to a 186mph top speed due to a gentleman’s agreement, but how fast do you really want to go? I suppose for an answer we can go to noted motorcycle speed freak Hunter S. Thompson:

“Faster, Faster, until the thrill of speed overcomes the fear of death…” Or as he wanted on his tombstone, “It never got fast enough for me.” Or I suppose we can go with Han Solo and just say, “It’s fast enough for you old man”

These are just used bikes now, even with all that speed. N.A.D.A. says the average retail price for a 2000 is just $2,750. These bikes certainly don’t make a great track day bike because they will eat tires and fuel, and spit you off the second you forget about all that power. But if you can ride like an adult, you may be able to surf the torque and never have to shift gears around the whole track.

Slightly softer in focus, the ZZ-R makes a better sport tourer than the ZX-12 (you could also get these with factory hard bags.) The ZZ-R slots in sort of between the Concours 1000 and the ZX-11, or maybe it's the natural successor to the ZX-11 based GPZ1100? Power is just 145hp, but it's less peaky with power everywhere compared to its sportbike sibling. N.A.D.A list the 2002 average retail price at $2,995.

When the ZX-14 was released the cease fire in the speed and power wars was over. The bike is still electronically limited to 186mph, but it is capable of going much, much faster than that.

It's still being made and sold new, and it has just about every modern feature including traction control, ABS, and adjustable maps for different riding conditions. They look great, they ride great, and with a few bolt-ons/tweaks, it can put out a true 200hp.

The only downside, besides its appetite for tires and fuel, is its price—which is still not in pocket change territory. Find an early one and you should be able to buy it for about $4,500 with newer ones being progressively more expensive; 2010 ZX-14s in good condition can cost $9,000.