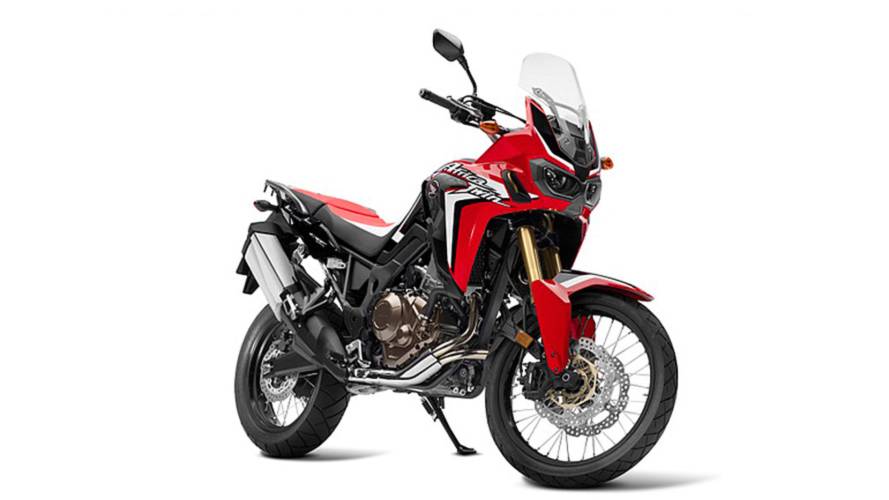 U.S. pricing has been announced on Honda's hotly anticipated Africa Twin, and it's more or less what we expected: more expensive than similarly specced bikes from Kawasaki and Suzuki, but not by much.

MUST READ:  Honda's Africa Twin: Will it Delight or Disappoint? | RideApart

Honda would almost certainly point out, however, that within the above class the Africa Twin is the bike best suited for all-round riding, including genuine off-road use. According to a press release issued early Tuesday, the new Africa Twin will have the most suspension travel in its class: 9.1 inches for the inverted 45mm Showa fork, and 8.7 inches for the rear wheel.

Off-road-friendly features include tube tires, wire-spoke wheels, hollow aluminum axles, wave-design brake rotors, and a rubber-mounted aluminum handlebar with a tapered design. The bike's air-intake design makes it possible to access the viscous air filters without removing the fuel tank. Between the standard adjustable saddle and an accessory low version, seat height can be adjusted between four different settings, ranging between 34.3 and 32.3 inches.

On the road, the Africa Twin will benefit from a low center of gravity and just shy of 100 hp. Minimal fairing and a rally-style windscreen will help to keep the wind off at higher speeds.

Meanwhile, the base price for a DCT-equipped version of the motorcycle is $13,699. Both versions of the bike will come equipped with ABS and Honda's version of traction control (HSTC) as standard. Both features can be turned off for off-road use.

The return of the Africa Twin is clearly a hugely important moment for Honda. In the guise of the V-twinned XRV750, the Africa Twin earned legendary status among world-crossing riders in the 1990s. Helped in popularity by HRC wins in the Paris-Dakar Rally, the motorcycle earned a reputation for carrying a bullet-proof engine and being relatively easy to repair/maintain.

Production of the XRV750 ceased in 2003, and many have felt that in its absence Honda has failed to keep pace amid the current adventure bike craze. It should be noted that Big Red has, in fact, offered a number of adventure-styled models—including the Transalp, Varadero, Crossrunner and Crosstourer—but none seem to have captured the public's imagination in the same way as the Africa Twin.

The modern 998-cc parallel-twin version of the Africa Twin is set to reach U.S. dealerships in spring 2016. It will, of course, be available with a raft of accessory goodies—including luggage, heated grips and electrical sockets. Honda is promoting the bike as a true all-round machine capable of delivering performance "from open highways to technical trails."

Honda says the DCT version will be just as capable. However, convincing customers of that may prove to be challenging. Quite a few skeptical eyebrows were raised a few months ago when Honda first announced that the Africa Twin would be made available with DCT. After all, a high-tech automatic transmission doesn't seem like the sort of thing you'd necessarily want when traversing the mountains of Kazakhstan. Even in Honda's own promotional videos for the Africa Twin, one of its test riders admits to not being a fan of the innovative transmission.

Perhaps to help people ease themselves into the idea, Honda says it will offer an accessory foot-pedal shifter on DCT-equipped Africa Twins. DCT changes gears automatically, but allows a rider to override the system via buttons on the left handlebar. Switching the job of shifting back down to the left foot may allow riders to think of the DCT as similar to the acclaimed Gear Assist Pro feature on the BMW R1200GS.

"No fewer than 32 patents have been applied for on this innovative model, and its specifications surpass the competition in several important areas," said Honda's head of marketing, Lee Edmunds. "We know our customers have been hungry for a no-compromise, do-it-all adventure bike, and we’re confident that the Africa Twin fits the bill."

MUST READ:  How-to: Riding in The Alps | RideApart