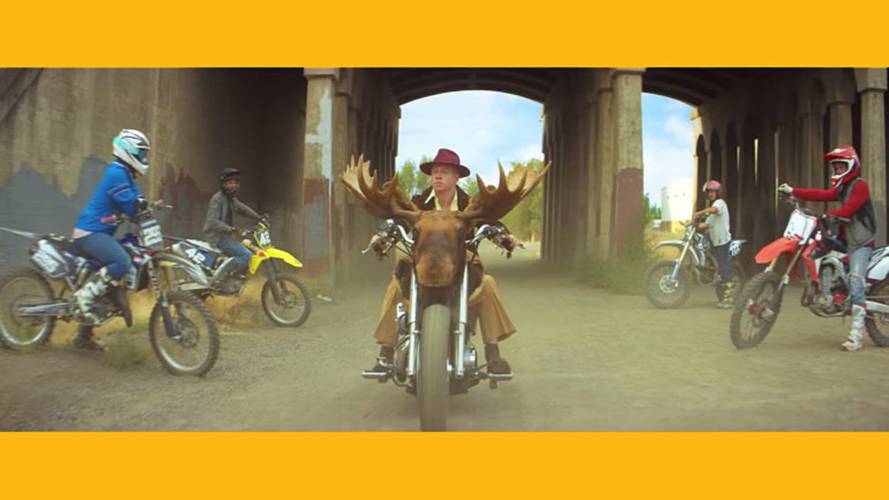 There aren't many music videos that beat Macklemore's Downtown music video, but there are ones that come close.

Featuring a chorus sung by Noel Fielding's heroin-chic doppelganger on a chariot driven by Royal Enfields, and a cameo from Ken Griffey Jr., "Downtown" is well on its way to becoming a cultural marker. And, as an ode to the economy and romance of two-wheeled vehicles, it's probably the most positive mainstream depiction of motorcycling since... uhm... I don't know. Those Honda ads from the 60s?

All of which got me thinking about other music videos that feature two-wheeled machines. That is, music videos where motorcycles are something other than props for cheesy white male "rebels" or rockers aging gracelessly. (Although, as much as I hate that last one I still can't help quietly admiring Kid Rock for the line: "I can't hear you over the rumble of my freedom.")

Ultimately, I came up with seven such videos, hence this article's Buzzfeedy headline. Here they are in reverse order of awesomeness (least to most). If you can think of any others, please share in the comments.

This song has been around a while and probably shouldn't even be on this list. It's not terribly artistic or clever. It's funny, but unintentionally so –– such as with the lyric that sounds a whole lot like, "Poo I don't ever sip."

Not to mention the fact Meek Mill made a song that was apparently borne of listening to Lonely Island's "Like a Boss" and thinking: "I wish I had thought of that." Also, Team Drake 4 Life, y'all.

But Meek claims as his roots the same sort of bike culture that produced the 12 O'Clock Boys, and in this video he performs a number of particularly steep wheelies. I can't help but respect him for that.

Random lyric: "We in the buildin'/ y'all are not."

Here's a cheerful video telling the story of a German girl whose only escape from the drudgery and utter misery of life is her Ducati Monster. Eventually she finds a place to belong among a group of stunt riders, but things go horribly wrong. Or maybe they don't. Maybe it was all a dream. To be honest, I get a little lost with this one and I'm not sure what's happening.

All I know for certain is that motorcycles are involved, eastern Germany looks depressing as hell, and somebody's going to be really upset when he finds out what's happened to his deer stand.

Random lyric: "Sometimes I wish that I were dead."

Sticking with the theme of bleak European locales and stunting, this Birdy Nam Nam video has actually been mentioned on RideApart before but it's worth watching again. This time the bleak European location in question is some snow-covered part of France. Or, one assumes it's France based on the fact that Birdy Nam Nam are French and some of the riders are wearing gear from Parisian clothing boutique Rock The Streets.

Here we get a love story of sorts. The classic tale of boy does wheelies on the freeway, girl fixes motorcycle by holding a light to it, girl rides in the snow, boy sets his tire on fire, boy and friends perform mating ritual dance with sport bikes, boy and girl hug. This how people used to get together before Tinder.

Is it possible this video made my list because Lizzo is a Texas-raised artist who now calls Minnesota home? And I just so happen to have a strong bias toward those two states? Maybe. But also, there are the donuts. And the rubbing of a man in butter. And a first gen GMC Safari. And that sign that says: "If God hates gays why are they so awesome?"

Truth is, the motorcycles are just one of roughly a dozen reasons to love this video, not least of which being the actual song. And if Lizzo and Sophia Eris ever want to rub me in butter, I won't complain.

Random lyric: "Apologies to the capitol because I don't pay my capital."

Action Bronson is up there among my top three favorite Albanians, below John Belushi and probably tied with Rita Ora. He is responsible for one of the best songs of 2015 (worth it just for the guest verse from Chance the Rapper). This track comes from the same "Mr. Wonderful" album and features Action Bronson as a Vietnam vet on an acid-fueled road trip.

There's very little evidence to suggest Action Bronson actually knows how to ride a motorcycle and the scenes featuring him on one are as convincing as his guitar playing at the end. But if for no other reason, you have to love him for his "tripping" face.

Random lyric: "I'm crazy tan from all the places that I been."

Effectively this video serves as a mini-documentary about wall of death riders in India. The lyrics have nothing to do with motorcycles and at no point do you see Django Django. The video is captivating, nonetheless.

There's clearly a wide gap between what these riders do and the concept of safety. Even more so than with your usual wall of death show. The arena appears larger than wall of death shows I've attended, boards are missing on the track, and one dude is riding around in sandals.

Random lyric: "Another fallout from this thing just radiates."

There used to be a time when people did their Internet-ing at work, so head's up on this one. There's nothing here that Miley Cyrus hasn't already shown us, but I thought I'd give fair warning should you happen to work at a church or something.

If you don't, hey, welcome to your new favorite music video. Yes, the topless women play a part in that, but so do the old-school Hondas, frenetic editing, driving blues rock and the inexplicable prominence of tighty-whitey underwear. And the octopus.

Meanwhile, here's a question to ask yourself: When Snoopy, Mousey, Joker and Sad Girl all go off on their own, how do you suppose Spider passes the time?

Random lyric: "What's up to the people that don't know me."