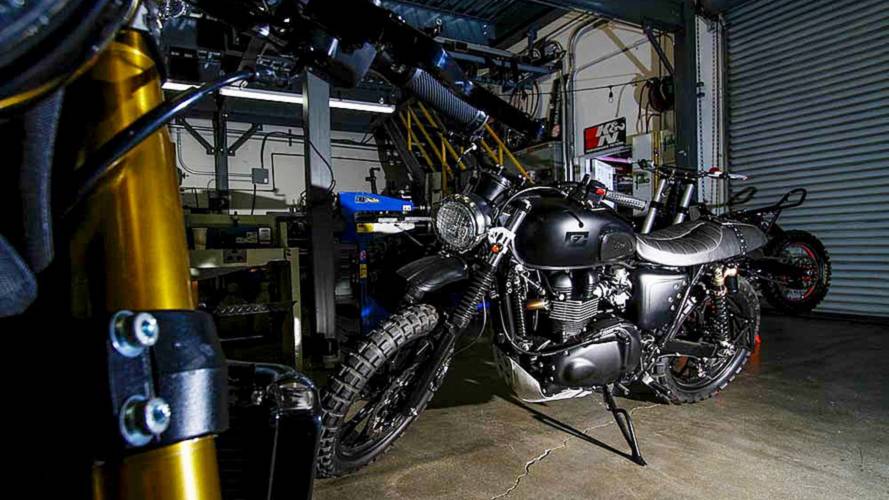 Roland Sands builds a Triumph Scrambler for a friend, the Schlege Triumph.

With other manufacturers jumping on the Scrambler train, it appeared that maybe Triumph would be left behind. Thankfully for them, their entire Bonneville line is easy to modify, has healthy aftermarket support, and is still a favorite of builders because of it.

READ MORE: Ducati to Unveil the Most Powerful Ducati Naked Ever

Added to that a list of customizers and builders is Roland Sands, who created a one of a kind bike for a customer named Chris Schlege: the Schlege Triumph.

It has a one-off Black Ops Del Mar wheels with gnarly off-road styled tires. This definitely amped up the attitude and capability.

With more forward bite, it's always a good idea to improve your "woah" factor. Galfer wave rotors were fitted, and the stock steel sprockets were removed. These were swapped for a much lighter anodized aluminum Renthal version.

RSD raised the front fender and added Pro Step bars, Traction grips, Nostalgia risers. They also fitted the bike with a custom skid plate. All those bits really added to the Scrambler's attitude and stance.

The handmade stainless steel RSD Slant low pipe and K&N filters increased intake and exhaust velocity. The Scrambler—with its 270 degree firing—already sounds great, but with a set of pipes it becomes an aural symphony.

A new RSD Stepped Enzo seat narrowed and shortened the back of the bike, and made the bike look slender in overall.

They added some new RSD Tracker turn signals so people can see where you're going, and they can also hear you coming with that custom pipe.

As a Triumph Scrambler owner, it makes me smile to continue to see new custom builds on this venerable chassis. The simplicity of the motorcycle, the supremely sorted chassis and motor, and the reliability of it make for a great palette to create your own custom or just to ride it as it is.