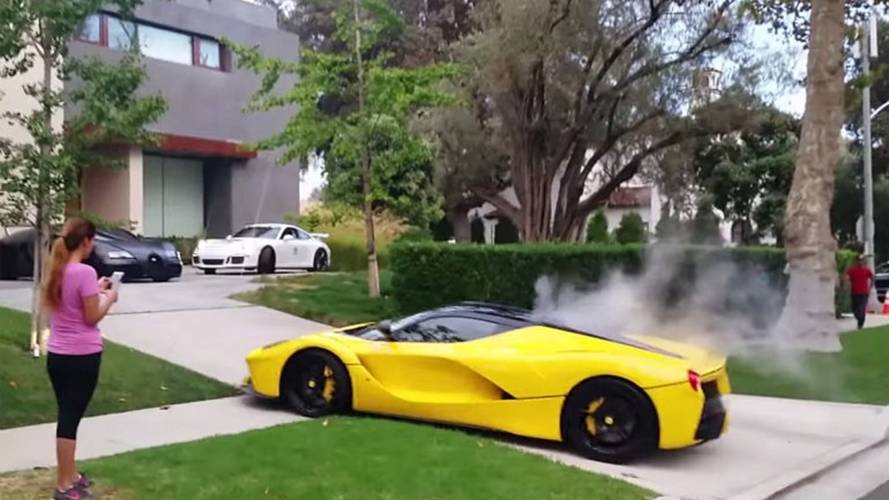 LaFerrari's Bizarre Drive through Beverly Hills Ends in SmokeIt’s always a remarkable sight when a Ferrari is spotted roaming the streets. More...

It’s always a remarkable sight when a Ferrari is spotted roaming the streets. More impressive are the times when a LaFerrari is caught cruising. LaFerrari is currently Ferrari’s finest super car offered to the public. With 950 horses  from a 6.3L-V12 monster, LaFerrari costs a pretty penny—$1.4 million to be exact.

It’s a fact that nobody on the face of the earth would ever grumble about owning such a gem and would definitely prize it with great intensity. Now what if we told you that there are some individuals out there who have the capital to afford one and fail to value it? Well we present to you this buffoon.

This inept individual is seen in the video below wildly racing through some narrow streets of Beverly Hills. He first makes a turn and painfully scrapes the bottom of the front bumper. Then, a Porsche 911 GT3, another “inexpensive” toy, joins the bizarre run. Moments later, the LaFerrari nearly crashes into a Nissan before failing to stop and carelessly crossing the intersection. As the LaFerrari arrives at the end if it’s senseless drive, the engine bay begins to heave smoke. Running a little hot, eh?

Cheers to those who do cherish their rides.