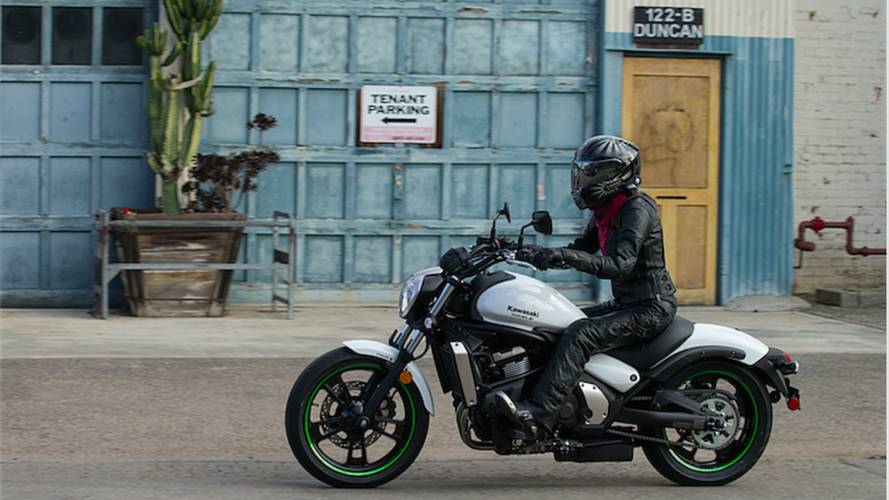 The Kawasaki Vulcan S Riding Impressions - From a Small-Fry Beginner RiderAs the owner of two Kawasaki Ninjas, I feel like I have to preface this by...

As the owner of two Kawasaki Ninjas, I feel like I have to preface this by saying I do drool over other motorcycles—it doesn't have to be a Ninja to catch my eye. I’d love to own a KTM 390, a little Honda NSR50, a BMW GS, among others. In fact, the last time I was perusing Pro Italia’s showroom, I exponentially worsened a previously small hole in the seat of my jeans while bending over to ogle the bottom bits of an MV Agusta. Pathetically true story.

READ MORE:  Is the Victory Empulse TT Just a 2016 Brammo?

None of these machines are remotely like the Vulcan S, Kawasaki’s new cruiser-style model. In my newbie mind, cruisers were generally built for comfort, sport bikes were made to be leaned over, and supermotos/dirtbikes were meant to take massive impacts and be thrown through the air and mud. Every bike has its place, but guess which of the aforementioned categories least interests me. I respect cruisers, they’ve just never been my first choice as a rider.

WIth that said, holy poop was I impressed with the Vulcan S! Lets start with the fit. The bike features Kawasaki’s new Ergo-Fit system, which allows riders to set up the Vulcan S’s ergonomics to fit their specific needs. The system is way more versatile than it sounds, with three options: reduced, mid, and extended reach. That's a compilation of three forward control mounts, and two handlebar and seat options.

Not many cruisers fit me, save for a few metric cruisers and a long-seat Harley Sportster. On a good day, I stand at about 5'2", with a fairly short inseam. I often tip-toe my Ninja 250. When I looked at the Vulcan S it seemed huge, so I immediately opted for reduced reach settings across the board. In all honesty, I expected even that to be too large for me.

After a day of riding the bike around, I had been proven entirely wrong. In fact, by the middle of the day, I had swapped bikes with another rider for a few passes of some winding pavement and was convinced that the mid reach settings were way more comfortable for me. What does that mean in the bigger picture? I’m confident the Vulcan S would comfortably fit riders even smaller than me with its versatile settings. Hear that? No more being relegated to only Honda Rebels.

The cool thing about the different combinations is they don’t cost a dime. If you buy the bike new, you can opt for any configuration. After that, you can still change it and it’s also pretty simple. The forward-control pegs simply need to be bolted into the other slots, and the gear-shift linkage needs to be replaced for a different length—it retails for around $10. The handlebars and seat are to be expected to be much higher, at around $200 each.

Speaking of smaller riders, for reference, I weigh under 120 pounds on a good day. That’s not a lot of mass to be picking up a bike or moving it around, especially when I'm weighed down by gear. I had anticipated some difficulty getting the Vulcan S off of it’s kickstand and moving on the asphalt, but once again the bike delivered on it’s promise of approachability. The shape of the chassis and tank tapers nicely, allowing even a shorty like me to stand it up with both feet planted solidly on the ground.

What’s more surprising, in spite of it’s large look, is that I had no problem getting it upright. This is likely due to the bike’s low center of gravity and curb weight, which is just shy of 500 lbs. There's practically no weight above the seat level, making it feel much more nimble than the spec sheet says. Once in motion, I hardly noticed its weight at all.

READ MORE:  Ducati to Unveil the Most Powerful Ducati Naked Ever

So how did the bike handle? First lets get a little context. Before I tried out the Vulcan S, I had arguably spent most of my riding career on my 2012 Ninja 250R. My little dude had over 20,000 miles under his belt, at least half of them from Southern California’s freeways. So for all intents and purposes, I'm a new-ish, smaller rider, accustomed to my small-ish, 375 pound bikes.

Looking at the Vulcan S, I expected it to be sluggish, have a steady straight-line speed, and a spongy response in the corners. I mean, after all, it weighed so much more than my little Ninja and has far from the same ergonomics.

Starting with some low-speed turning, Kawasaki had us riding in the most urban area Santa Barbara has to offer. Surprisingly, the bike handled fairly well. At no point did I feel like I was going to dump it in a turn or when I needed to stop because some inattentive driver blew through an intersection, I felt confident. From there, we hit a variety of back country roads, freeways, and even some nice little twisties. The pavement varied from clean and smooth, to some patches covered in dirt and sand, and even some gravel-strewn sections that crossed railroad tracks.

On the freeways, the bike really shines. I never had issues with my 250 on the freeway, but it was nice being able to ride along at traffic speed without it screamin' at me the whole time. I also loved having access to so much more power and speed at lower RPMs. Doing over 40 mph in 3rd gear without the machine feeling like it was working overtime was great.

The bike’s throttle response was good, making merging onto highways from dead stops no problem, though, I wouldn’t expect any unintentional wheelies out of it. High highway speeds still saw its share of vibration and singing rpms inherent of a 650cc, but for someone who hasn't ridden over 400ccs, the bike is a dream.

Another huge difference I noticed was how much the weight and geometry of the bike helped the ride. It felt much more planted in the wind, and less like it was being whipped around when passing semi-trucks and large tour busses. The wide mounted front end also helps in the stability.

But how did it do in the twisty sections of road? With the different seating position, there was definitely an adjustment period for me when it came to cornering. I was pretty conservative with the bike for the first half of the day, but I knew I’d gotten comfy on it when we hit some nice little curves and I felt a peg scrape (yikes!).

While I didn’t freak out, I told myself to knock it off; I didn’t want to damage the press bike. But then I saw that beautiful ribbon of asphalt, and thought, “What the heck? I’ll just try leaning off the darn thing.” Much to my surprise, that did the trick. It cornered better than I expected, had good brake response, and managed to stay fun in the curves. In a lot of ways, it felt like a bigger version of my Ninja 250, with a cushier seat.

Overall, the bike delivers a fairly comfortable ride experience that definitely boosts confidence in the saddle. It has a sporty take on the cruiser style that many people like, while still delivering the responsiveness that is so crucial in daily traffic. Features like optional ABS and instant fuel economy read-outs make it a great fit for beginners to grow into. It's also a great bike for veterans who want something fun and nimble, without sacrificing comfort.

READ MORE:  The 2015 KTM 1190 Adventure Review: Crossing the USA From Coast to Coast