Meet the Man Who Raced with the Gods 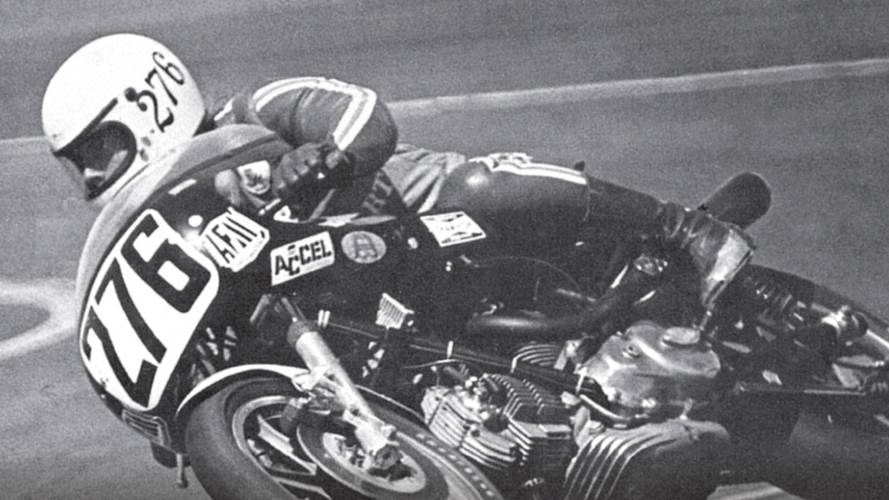 Learn more about Paul Ritter, the man who raced with the gods on a Ducati Superbike back in the late 70s.

Even though motorcycles are my main (and favorite) hobby, I do have others—one of them being reading. But lately I haven’t been reading as much as I used to, so I was stoked to have met Paul Ritter, author of Racing the Gods. He gave me a reason to pic up a good ‘ol book filled with paper, and get back to doing what I enjoy: reading and motorcycles.

I met Paul Ritter at the WSBK races at Laguna Seca back in July. He had a copy of his book (it was also the last copy he had on him) sitting in his lap. He wanted to give it to Josh Hayes, who was temporarily not available to speak with Paul, but was going to meet with him once he was free. The title of his book intrigued me, and I had a feeling I was about to talk to a man who had a spectacular history in road racing.

After having the opportunity to chat with Paul about his book, I ordered my own copy of Racing the Gods, wanting to read it before I wrote this article. Let me tell you, I’m so glad I did. It doesn’t matter if you have no interest in motorcycle racing—anyone who has a passion for two wheels will thoroughly enjoy this story. It’s an easy read that will keep you engaged from beginning to end, and just to give you an idea of what it’s about, I will provide a brief summary below.

The book is broken up into the halves. The first half begins with Paul detailing how he got involved with motorcycles by street riding before getting into in road racing. When he did start racing, he participated in the AFM (American Federation of Motorcyclists) back in the mid 70s.

He was able to make great connections and got a sponsored ride, a Ducati 750SS. After being successful on that in his club races, in 1977 on a Ducati 900SS, Paul decided to enter into the AMA Superbike race, which was a support class at that time. What made this even sweeter was that he raced with some of America's road racing legends.

Paul goes on to win his first race as an AMA rookie and he continues to detail the remainder of his AMA career before the reader gets to the second half of the book. The second half is about how he ended up in a wheelchair, after an unfortunate incident at an AHRMA race in 1998.

But I don't want to give too much away, I want RideApart readers to hear from Paul himself about how this book came to fruition, what to expect, and what he wants readers to take away after reading his book. So, while Paul was waiting to meet up with Josh Hayes, I asked him a few questions about Racing the Gods. The first thing I wanted to know was about the process—how did the book come to be?

READ MORE: Living the Ducati Life...If Only for a Day | RideApart

“I’ve been working on it for six years and I’ve been through several versions. I’m not a natural writer. I made one version that was awful—the first version. And the second version was not so bad, but it was just a history book and the third version was a little bit more of me in it and stuff. But finally, I went to a seminar on how to write memoirs and the teacher was a published memoirist, and she gave some clues about what it should be like. What I had was basically a long diary, but not really a memoir, and so I adapted her ideas to it then had it edited,” Paul said.

After taking the advice of Ed Milich, who is also a writer and a racer, to get the book professionally edited, he sought out a few niche publishers that specifically produced motorcycle books and landed a deal with one.

“They said okay we want to publish your book and I thought, ‘dynamite,’” he told me.

His book first debut at the COTA MotoGP races back in April. I then asked him what reader’s can expect from his book and for any details could he provide me. He answered:

Here’s an excerpt from chapter 7 of the book, pages 100-101, that details his thoughts on the grid during his first AMA race. It also addresses his explanation of the book's title:

“What am I doing here? I thought. I was in the middle of the starting grid at Sears Point raceway on a Ducati 900SS Superbike. The first row had some of the best road racers in North America: class champion Reg Pridmore, Daytona-winner Cook Neilson, the veteran Ron Pierce who won the Loudon National earlier in the year. Just behind them on row two were Steve McLaughlin and three other expert-ranked fast racers, all on 1,000cc Kawasaki Z1 Superbikes. I was reading Ron Pierce’s name in the motorcycle magazines before I was even riding. I would be racing with the gods.”

Paul continued, “I then stopped racing in 1980, but then got invited to a vintage race in 1998 and that’s when I got swept up in an accident that put me in the wheelchair. And the second part of the book is about the accident and what I did to rebuild a different kind of life, but still a good one, in a chair. And I met my wife after I was injured so there’s a little romance in there.”

He proceeded to tell me about his wife, Dee Granger Ritter, who has been such an inspiration to him. In his book, you learn how she encouraged him to do a variety of different things, including obtaining his scuba diving license.

Paul and his wife Dee.

Finally, I asked him what was the goal of this book? What did he hope for readers take away from reading Racing the Gods ?

“I just thought it was a story people should know about how Superbikes got started and what it took and what kind of people were involved in it. There were some amazing folks were what I call Superbike pioneers and I talk about them in the book. Most of them are in the Motorcycle hall of fame. Guys like Cook Neilson, Reg Pridmore, Steve Mcglaughlin, Wes Cooley—those are guys I raced against. I just wanted people to know what it was like in the beginning. Also, I wanted my efforts in that area recognized,” he said.

Ultimately, it’s a book that he thought would be fairly easy to be put together, but as you’ve read so far, it took a lot of work on his end. He did tell me that even though it was hard work, the experience has also been a fun one.

“It turned into a pretty good book,” he told me, “a lot of people like it.”

And I have to agree with him. As I mentioned above, his story is a fantastic read for any motorcycle enthusiast. Definitely pick up a copy—which features a forward by Cook Neilson—on Amazon.com or on the Octane Press website. I promise you will be inspired, shed a tear, laugh, and overall, realize that even though Paul Ritter is in a wheelchair, he’s still a motorcyclist—it’s something that’s embedded in the soul.

You can also check out Paul Ritter’s blog to see what he’s up to.

Paul at WSBK this past July. Josh did not forget about him!