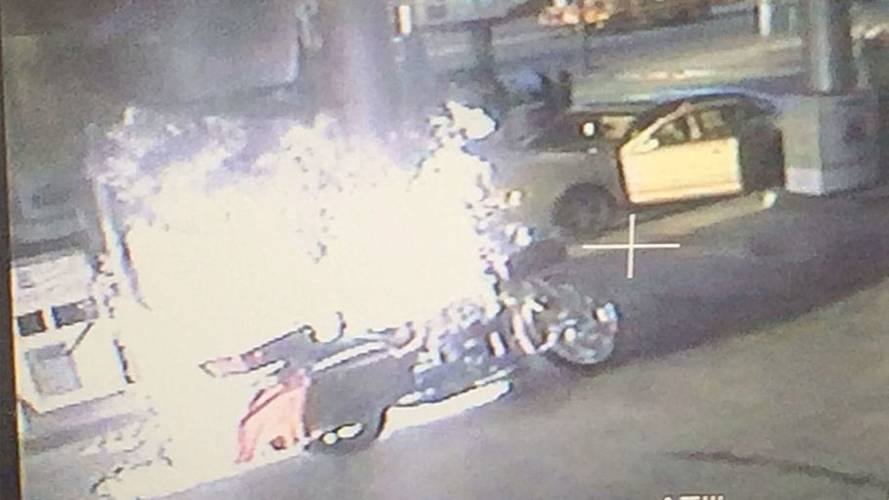 Rider Badly Burned While Pumping Gas - This is Why You Turn off Your Bike When Pumping Gas When I first moved to California I hated those...

When I first moved to California I hated those fume-catcher-thingies on the gas pumps. They’re designed to re-route fumes back into the pump and tanks instead of into the air. However, If you're pumping gas into a motorcycle, they’re a pain. You have to hold the end of the pump closed like an accordion in order to activate the pump. But after watching this video I’d agree we may need these at all pumps across the US.

On Thursday, a man pumping gas into his motorcycle in Cobb County, Georgia was badly burned when the pump caught fire.

READ MORE: Watch Harley-Davidson Rider Crash into a Light Pole During Ride of the Century - This is Why you... | RideApart

The cause of the fire seemed to be a comedy of errors brought on—I hate to say it—by a man who's lying in a hospital bed right now... stupidity. Yes, the California-only accordion, fume-catching device (not it's technical name) on the pump may have prevented this, but what caused it is obvious.

It appears as though the news station has since edited the video, so you don't actually see the man becoming engulfed in flames.

A witness, according to WSB-TV Atlanta, said the man just wanted to jam out while pumping gas. He’d left his bike running with the radio blaring when this fire occurred.

“I saw the gas coming over the tank, and I yelled at him, but he didn’t hear me and before you knew it, it happened really fast,” said Billy Houston, according to WSBTV. Houston and another man are said to have saved the rider’s life by rushing over to him and extinguishing the flames.

It appears as though he’d been jamming a little too hard, and was distracted by the fact that the gas was pouring onto the ground and behind the bike. What looks like a possible backfire, ignited the fuel that then engulfed the rider and bike in a flash.

This is why you shut off your bike when pumping gas!

As stupid of a mistake as this was, our thoughts are with the man. The 53-year-old was air lifted to the local hospital and is currently in stable condition.