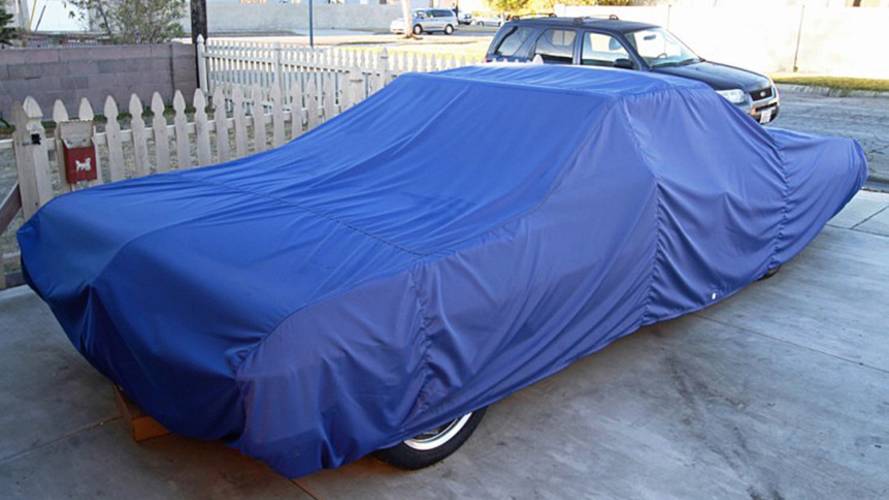 I never thought I’d own a car that needed a car cover, but knowing what I know now, I’d probably buy one anyway.

I never thought I’d own a car that needed a cover. Well, to be honest, I’m kind of cheating with this one because I’m forced to own a car cover. See, the car is a convertible...well technically it's a four-seater roadster as it doesn't have a top—just a frame that once held a cloth convertible top. It resembles more of an original Phaeton now (a car with four seats and no roof).

My 1967 Impala is a two-time Hot Rod Magazine cover car. A rust-bucket, it was originally used for a story about how to install your first engine, then a story to see if vinyl wrap is viable for a hot rod and finally a backyard paint job story.

Since I've owned it, it's been my pride and joy, a device whose restoration has taken many of my days and much of my wallet. I've replaced rusty floorboards, corrected body damage and reupholstered some of the interior. That being said, it’s also been the first thing I push to the side when something important comes up like fixing my wife’s new motorcycle, working on another recent flat track project, or simply working my desk job. So it’s occasionally forced to remain in limbo until I find time. Oh how I hate that phrase “find time,” so I invested in a car cover.

I went down to the Auto Zone and invested in a ProElite Extreme Duty car cover for around $60-$80—depending on the size. After I returned home and attempted to get it on the land yacht that is my 1967 Impala, it refused to fit. After much head scratching and arguing with the Auto Zone people, I found out my cover was sealed into the wrong package. So after 30 minutes of yelling, “I just want what I paid for,” I received the correct cover.

This is the Ultra Tec cover

Just a couple weeks later, I realized this cover was utter crap...for lack of a better description. It was far from water-resistant, it faded in the sun and essentially is just a disposable cover. Since then, it has basically disintegrated into a fine powder that added insult to injury by spreading over everything!

So this time I decided to call the right people: Covercraft.

Now granted, this cover is a little over three times the cost of the cheap-o Auto Zone cover, but it’s worth the dough. Our Impala mostly sees the driveway as LA property is expensive and I can’t afford another garage to house both the car and motorcycles. This SoCal weather is fine for you and me, but not great on the car; we have a steady diet of high temps and hard sun, and when it does rain (which isn't often), it’s heavy.

At the moment, because it’s still a project, our Impala has no top. But it does have fresh floorboards and upholstery, so now it really matters that we keep it out of the rain. I have all the parts for a new top from Classic Industries, just again no time.

This may be a silly misunderstanding on my part, but you can’t actually have a waterproof car cover. You can, however, have a water-resistant cover, as our Covercraft is. Waterproofing can damage paint. See, if you had waterproof, whenever water got under the cover—small amounts from condensation for example—it would be trapped and find it’s way through your paint, causing bubbling in the paint.

Choosing the Right One

Our Impala is large, so finding the perfect cover could've been difficult. Luckily, our process with Covercraft was easy. I simply called them and said, "it’s a 1967 Impala and it’ll see mostly outside and some inside storage." Bingo, that was it.

I opted for a few accessories, like a locking-tie cable that’s designed to go under the car and hold the cover to the car itself, but honestly, we haven’t used it.

My first cover quickly lost it’s elasticity, but our Covercraft is very firm and grabs the bumpers easily, so there's no need to tie it together at the bottom. Plus, it’s a pain to reach all the way across. It’s also a way of deterring kids in my neighborhood from messing with the car or giving thieves one more thing to get through if they want to steal it.

We also opted for the Gust Guard, which again, our last cover would often be found in my front yard after returning home from work, but with our Covercraft, it’s not necessary.

Our other option for a cover, because the car mostly resides outdoors, is the Weather Shield HD cover; for our application it’s a whopping $599. So, we picked the Ultratech because it’s not always outdoors and this is the best mid-range for what we’re looking for. Ours has a four year warranty, but the HD has a five year.

The water repellent is excellent. In low areas, where a cloth top would normally be found, water puddles up. The cover shows very little sign of leaking through its material, because again, it’s water resistant—not waterproof. It’s achieves the maximum in terms of resistance while still not being completely sealed. The material is strong and heavy, which is good since those puddles pull hard on the material. This is not a great method for using any cover, but it's turned out to be a good test of the cover's durability.

The inner liner is soft and we were told the car needed to be spotless, waxed, and cleaned thoroughly before the cover goes on. This is because a cover's movement will spread any dirt around and scratch the car. We cleaned, but didn’t wax. We haven't found a scratch yet, although again, the company insists you wax a car before installing the cover the first time.

Covercraft advertises it to be fade resistant, and so far it has been. We picked the blur color, but they also offer it in blue, tan, grey and black.

We’ve been using the cover for about three to four months now, and it has kept its shape so far. Our previous covers have started to show problems by this time, so it's still premature to say definitively, but we haven’t encountered any major problems or even signs of future problems with the cover.

My favorite part of the cover is the fitment. There’s a small marking for the front and back, which makes it easy...once you find it. A tag or something larger would help, but I’ve seen some covers that aren’t marked at all, which is a major pain. It simply snaps into place once you’ve moved it around the edges.

All in all, the Covercraft is expensive, but you get what you pay for. I've enjoyed the cover since I received it. The process from ordering to installing has been super simple. It could use some more signage, but that's the only major complaint.