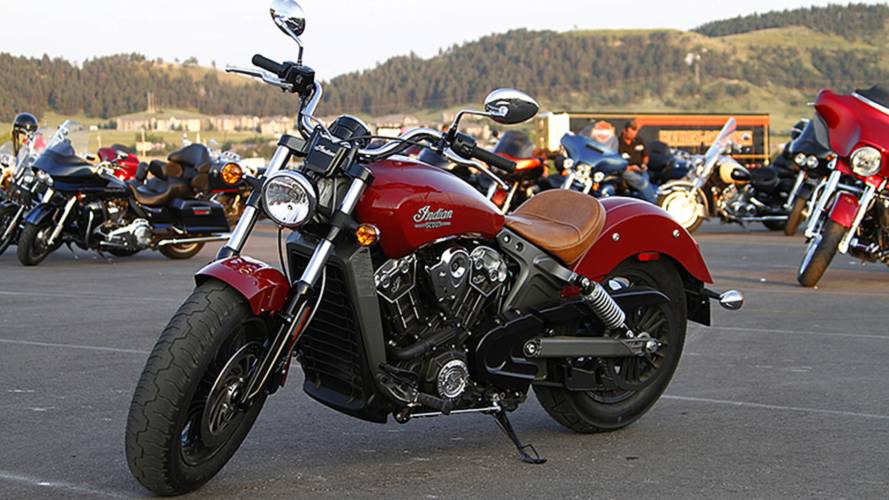 We review the 2015 Indian Scout at Sturgis. The infamous Scout makes its triumphant return to the market. This mid-sized Indian packs a big punch.

Don't call it a cruiser. The 2015 Indian Scout is a new breed of motorcycle that's hard to pigeon hole into just one particular category. Your seating position isn't quite as leaned back as a cruiser, the price isn't low enough to be entry level, it's way too nice to be decent off road, it's fast (but not sport bike fast) and it's beautiful. So, what do we call it? The Scout.

Introduced on the first Saturday at Sturgis, the Scout had everyone talking, and not just the Harley crowd. Could this new bike pave the way for Indian, and finally get guys like Harley to take notice?

Polaris bought the once-thought-cursed name of Indian motorcycle in 2011. No one knew their plans and we expected a rebranded Victory (which Polaris also owns). Instead, Polaris did a complete redesign on the Indian brand and created a whole new lineup of pushrod V-twin bikes that shared no parts with their Victory stablemates.

So far, every Indian we've tested has surpassed our expectations with bikes that have some serious torque, great looks and performance. Indian had, up until now, only made big bikes like the Chieftain and Chief and their newly introduced and even bigger RoadMaster. But Indian had always wanted a small performance bike to fit into the lineup, which made reintroducing the infamous Indian Scout—which has been out of production since 2002—back into the wild a whole lot easier.

What's New With the 2015 Indian Scout

Everything. This is the first of its kind. Polaris has invested a serious amount of time and money to develop the bike and equally as much promoting it. While at Sturgis, there were over a half-dozen demo rides scattered throughout the small town.

A completely new, water-cooled, double-overhead cam, 69ci V-twin, produces 100bhp, bone-stock. That's not a tremendous amount of power for a motorcycle, but it feels insane behind the grips of a 558 pounds (wet) bike. You can feel that the Scout likes higher rpms, unlike a traditional, large cubic inch thumping Harley that has enough down-low torque to power a tug boat. Those performance numbers don't sound staggering for a sportbike, but for a cruiser they're impressive.

We were lucky to be one of the first to throw our legs over the little Scout. Before we did so, the Indian PR guys looked at my 6'3" frame and immediately began talking about the add-ons coming soon to the little bike. He said basically all ergonomic points (handlebars, pegs and seat) will have the ability to move at least two inches with dealer installed hardware.

After picking up the bike from a warehouse on the outskirts of Sturgis, South Dakota during the rally, I was ready to ride. It had just stopped raining and Indian picked out a 100-mile route of hard twists through the Black Hills. The rain had scared off most other bikers, luckily, leaving the road wide open.

We jumped on the highway to gigantic giggles after pulling hard to 70mph. Luckily this bike doesn't have upgrades like traction control or wheelie control…

First we hit the highway, which became a workout after 30 minutes. I had to hold myself onto the bars, as the seating position intends you to lean back, but the Scout was a bit too small for me, which caused me to sit up on my tailbone, resulting in my butt falling asleep after 30 miles. That said, the brown-leather seat has a raised area that kept me planted in place.

After a long spell on the highway, we rode through Rapid City and then some twisty mountain roads. The little bit of weight the bike has is low and centered causing it to remain very stable entering and rolling through the corners. The angled rear shocks make for a stiff ride that keeps the wheels planted no matter the riding style.

Roll on the throttle hard exiting a corner and you would feel the rear end just ever so slightly squat, planting itself into the asphalt.

This is far from a Sportster and we don't really want to compare it to one. But, that said, allow me to compare the two features that the Sportster excels at - seating position and comfort. The Harley sits higher, for better ground clearance and suspension travel, but more important, the seating position is naturally good for every rider, no matter your height. (referring to Sportsters without forward controls)

Feet below you, handle bars in front, any rider can quickly adjust to get a good-enough ride. On the Scout, you're forced to buy the dealer-add-ons to fit just right into the bike. Some look at that as a good thing, but I believe a bike should be comfortable for all riders as soon as they throw their legs over it. If you can't get into a bike on the first ride, than you're not going to get it at all.

The seating position also causes the rider to be up in the wind. While we struggled on the highway to find a comfortable position, the sheer speed of the Scout helped distract us from our numb butts.

The Scout is incredibly snappy. Things like gears in the primary, in lieu of a chain or belt connecting the engine to trans like most Harleys, greatly increases throttle response. Compensating sprockets and chains/belts are used to create smooth transitions in throttle (stop/start and hard acceleration), It's obvious when you ride the Scout that those are missing, but it manages to walks the fine line between smooth and quick.

Besides the seating position, almost everything else. It feels faster than 100hp, thanks to the lack of weight.

This bike is better than a Harley and amazingly it'll demand more respect when you roll into your local bike night. For a lightweight, water-cooled bike, it's fast—or at least feels fast—and the aggressive exhaust note is spot on, too. Our Indian rep should be thanking us for resisting the urge of knocking out the baffles.

The Scout has a lot of modern and vintage-inspired components, for instance, the controls and gauges are very modern and feel like they belong on a much more expensive bike, but the Scout still has a lot traditional elements like throttle cables and no ABS.

Entry level? Well, not exactly, but hopefully this will change. If Indian wanted to make an entry level bike, than they wouldn't have rethought the wheel. They would have built a bike with a proven, cheap drivetrain with half the horsepower and a third of the fun.

Instead, they built something all-new. Yes, most guys will be buying this bike to just say they bought it, with no intention of riding it the way it should be ridden, but hopefully after time, the power plant will become available in other models, and drive the price down. Although, all that being said, the bike is not all that expensive when you run specs against a Sportster or Yamaha Bolt which both retail around $8,000. But it doesn't compare to the import throw-back CB1100 which comes in $999 less, but with more power and performance oriented parts. Although, apples to oranges, as the CB1100's four-banger is a completely different animal to the Scout which was more enjoyable on the highway, dispute the seating difference. It's all about preference, as the Scout retails for $10,999.

Two things I wanted to do to this bike while at Sturgis: first throw it on a dyno to see how the torque curve really comes in and if it's in fact as fast as we think it is. Second, knock the baffles out or throw a set of straight pipes on the bike - it sounds great stock. The guys managed to keep a the inherent goodness of a V-twin, but with all the needed technology that others have ignored, like water-cooling, overhead cams, geared primary, etc.

Not sure if this was intentional, but the easiest bike to compare the Scout would have to be the Harley-Davidson Street 500/750. Same uncomfortable-for-big-guys seating position and a new power train and chassis. Although the Street is definitely targeted more towards the entry level market with less power and price ($6,700).

The Scout, if it works, can be revolutionary, causing traditional guys stuck on the pushrod V-twin to start accepting modern performance. This bike is the gap between new and old and Indian made it beautiful to boot.

The Black Hills was actually not the best place to test the bike because it would do better in an urban environment. Since returning to LA, we talked with Indian about commuting on a Scout for at least a month. What should we do with the bike once we get it? Comment below.