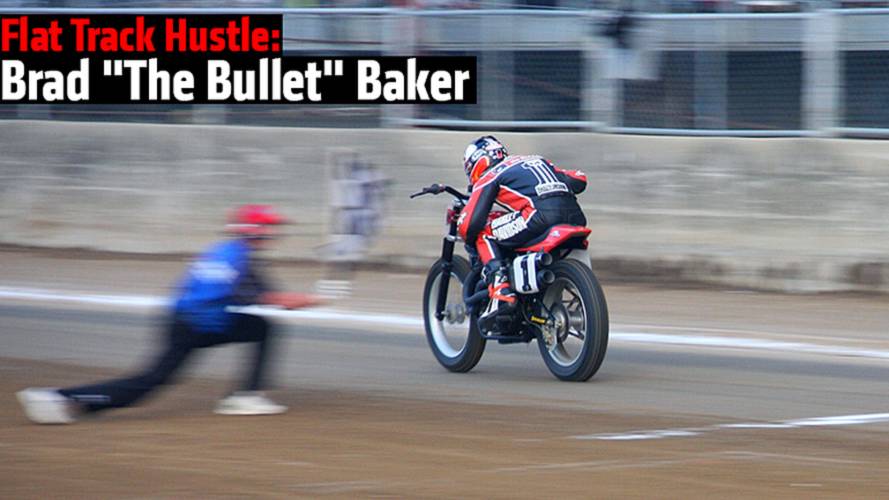 Except that's not it at all. Not for reigning AMA Pro Flat Track Grand National champion Brad "the Bullet" Baker. While he rides an XR750 for the factory Harley Davidson team, the gritty, frantic nature of flat track racing is reflected in the full-throttle schedule he keeps. RideApart sat down for an exclusive interview with Baker after his race at the Indy Mile.

Along with many of his competitors on the dirt ovals, Brad will race more than thirty times a year. Besides the 16- Grand National events all across the country, he'll attend 15-20 other races, from county fair exhibitions to AMA All Star races. When not astride his thundering Harley, he races a KTM 450 single. And between the two classes (Twins on the 750, Singles on the 450), he'll be on the track a half dozen times or more per day, sometimes multiple days in a weekend!

His pit with the Harley team looks as you might expect, with properly sorted bikes, a driver, a crew chief and all the trimmings. But for Baker's Singles campaign and small races, he's more or less a privateer, albeit a well supported one. His personal sponsors chip in bikes, gear, equipment and some financial support, but all of the work and coordination is up to him.

"I put the motorcycles together, I coordinate what goes on the motorcycles and I also do about three-quarters of the driving," he said, smiling. It's clear that he's loving what he does, and takes in stride the chaotic lifestyle that comes with it.

Baker (1) battles with Doug Lawrence (73) during a heat race at the Indy Mile. (Photo by Pete Hitzeman)

The Grand National series will see riders crisscrossing the country from March through October, with stops all along the way for smaller races. With all that time on the road, how does he manage to stay in the sort of shape that allows him to wrestle a bucking, 310 pound motorcycle around a dirt oval at speeds approaching 130 mph? Mostly, it's just the racing itself.

"I love to train. There's more of a training season for me ," he said. "When I get into this time , I'm driving, or working, or resting, or racing. It doesn't really leave much time to actually train."

On the rare occasion he does find himself with a little time, he loves to get out on his mountain bike. "I had a road bike for a little while, but I found that I like mountain biking a lot better. You can take some different terrain, do some more interesting stuff, and still get the same sort of cardio workout in."

Training on the dirt makes sense from a skill perspective as well, since it teaches you to adapt. Unlike the measured precision of racing on asphalt, a flat track can be different every lap, and dramatically different through the night.

"You always have markers, whether it looks like it or not," Brad explained, "but those marks constantly change throughout the night, and sometimes you might just completely throw that mark out the window. If you want to get around somebody going into the corner, you might leave it on another ten feet and hope and pray to God that you get it turned and keep it on the groove to get back in front of them."

Baker during his championship campaign in 2013. (Photo courtesy Brad Baker)

The Bullet spent his Friday night during the Indianapolis GP weekend hanging out at the State Fair, careening around on the fastest ride available: the Indy Mile.

Since its first running in 1954, Indy has been a highlight of the flat track racing scene, and has attracted some of the brightest stars in all of motorcycle racing; names like Jay Springsteen, Chris Carr, Kenny Roberts and Bubba Shobert. Since the debut of the Grand Prix in 2008, the Indy Mile has enjoyed a surge of popularity, as flocks of roadracing fans and even the GP riders and crews themselves crowd the fairgrounds track to take in one of the best spectacles in all of racing.

It all adds up to make the Indy Mile the premier round of the Grand National series, and Baker isn't surprised. "Roadracing and GP have such a tight knight to dirt track," he said. "To have them back to back at one of the most legendary tracks that we go to, and one of the best races of the year makes for a spectacular weekend of racing."

Being a part of the Grand Prix weekend, Baker had a front row seat for all the asphalt action, but he's not too tempted to try his hand at it.

"I think my sport's a little more gratifying, the way I do things," he said. "I'd be finding myself bored, and wondering what the heck I was gonna do if I was a roadracer with their series right now. And I'm probably able to make more money than pretty much all of them, too. So I feel like I'm in a better position."

Still, Baker is far from satisfied with being at the top of his sport. One aspect of roadracing he envies is the possibility of progressing to the international level, once your skill is proven on domestic soil.

"The thing about roadracing is that there's something beyond American Roadracing," he said. "If you become the American Superbike national champion, that might open the door, like Josh Herrin, to go over and ride in Moto2. James Rispoli is doing the British Superbike series along with P. J. Jacobsen."

"When you get to the top of dirt track in the United States, that's the end of it."

So one of Baker's side projects is to promote the growth of flat track racing, both at home and abroad. Last year, he banged elbows with Marc Marquez himself at the Superprestigio (which, if you haven't seen it, you need to watch right now), and he's working hard to have a Flat Track event added to the X-Games.

For a sport with as much apparent danger as Flat Track, its top riders have surprising longevity. Baker has been racing for 16 years already, shredding the dirt since the tender age of 5. How long does he plan to keep at it? As long as he wants to, if he has his way. And he'd be in good company.

"Kenny Coolbeth, the guy that just spanked our butts last night, he's 38 years old," he said. "Chris Carr retired at 42, Jay Springsteen at 41. But they're still riding motorcycles! Scotty Parker, the all-time best dirt tracker to walk the face of the earth, he was 40 when he retired."

After suffering a gnarly broken arm in a training accident in April, Baker is returning to form. He currently sits seventh in the Grand National Championship points standings, making the likelihood of retaining his #1 plate very slim. But rest assured, it won't be the last time The Bullet wears #1.