5 Reasons You Must Attend The Peoria TT 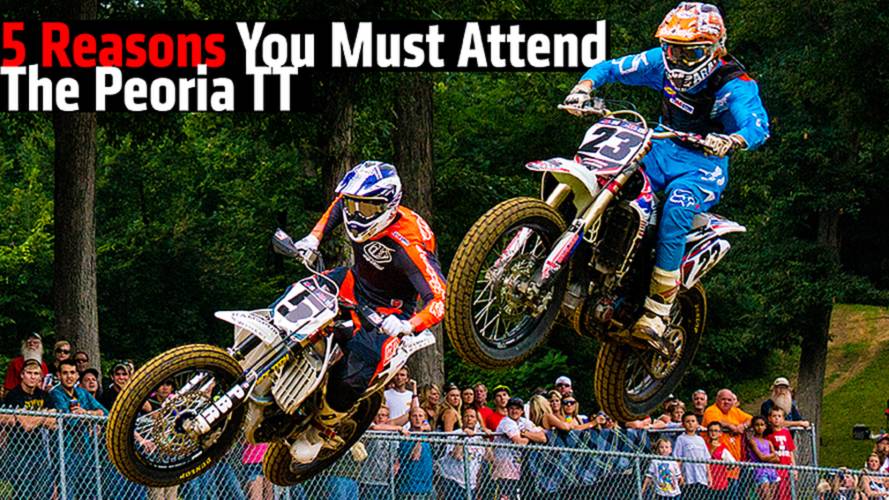 The history, track, racing and crashes are the best reasons you need to attend the Peoria TT.

I love flat track.There, I admitted it. Feels good to get off my chest. I can tell you the moment I knew I was in love: It was September 5th, 2012 and I had some friends over. One of them insisted I watch On Any Sunday

. This classic film, made long before I was born in 1971, had me starry-eyed in the first 20 minutes.

I remember the loud thunderous motorcycles gliding across the dirt on my television, it was like pure motorcycle poetry. The sounds of the singles, the flying of the roost, the smiles on the racers' faces. If you haven’t seen the film, I suggest dropping your plans tonight and watching it on Amazon Prime – I really think it’s that good.

But nothing compared to live racing.  The first flat track race I ever attended was the Peoria TT the following year. Maybe I’m biased because this was my first ever dirt track race, but I think there are some legitimate reasons why the Peoria TT is one of the most enjoyable races ever.

The track has some inherent goodness to it. The race is held at the Peoria Motorcycle Club, aka “Thunder Valley” outside Peoria, IL, and is a notably great track for spectators because you can stand really close to the race surface from just about anywhere around the course (except the last turn).

When I say that you can get close, I mean that you can stand by the fence in front of turn one and feel the dirt hit your face as the racers fly by. How's that for close?

You can also take an underground tunnel and watch the race from the inside the track while grabbing one of the best hot dogs you've ever eaten and a cold, cold beer. Either way, you’ve got options and it’s always cool to get different perspectives of the race, especially ones where there are beers and dogs.

Second, there is the both the long and more recent history of the race. This Peoria TT is going on it's 66th year, which means, as far as people watching goes, there are a broad range of generations that come out to watch the action. Everyone at this race is friendly, so you shouldn’t be surprised if you find yourself chatting with your neighbor about how long they've been coming to watch their favorite racer.

More recently, Grand National rider Henry Wiles has been absolutely dominating the Peoria TT. This year’s race is no exception and was his tenth consecutive win! Seriously, it was clearly a huge win for Henry and the radiant smile on his face made it easy to share in the excitement.

Finally, there's the track itself. It’s known for being fast and there is a long straight that allows riders to reach some crazy triple digit speeds as they start to pitch their bike sideways into turn one.

As if that wasn’t exciting enough, this race is a TT – which means there's a jump. That's right, a jump! The jump is a great crowd pleaser, but it also makes the race a whole lot more dangerous.

We counted six crashes in one day. While we would hope for no crashing for the entire day, restarts add another element of drama to the race itself – each time it was more and more unclear of who would be the ultimate winner.

Understandably, some riders choose not to ride this particular event but they are still there to show their support to their friends and fellow riders. Notably, Shayna Texter and Nichole Mees were present, and both still greeted fans and made their enthusiasm known.

My boyfriend, Bree, and I headed to the event early Sunday morning. The main event kicked off with 18 riders the Pro Singles race. It was an exciting race with hard competition and a more than one crash. In the first part, rider Kevin Walter collided with Cole Crowley, while Molly Terry, the first ever woman to qualify for a Peoria TT, narrowly navigated around the wreckage.

The race was restarted with the point leader, Kyle Johnson, taking the second restart spot and 16 laps to go. In a repeat of the original start, he leapt out to an early lead with Jacob Lehmann hot on his heels. Johnson was really flying — making 130-foot leaps off the jump — but ended up going down twice in one lap and throwing the race, just after the halfway point.

Second place racer Jacob Lehmann now took the first place position on the staggered restart, although his sizeable lead over Wells and Lau in Third and Fourth was gone and he had to ride hard to be the first one to the checkered flag for the final five-lap dash. Lehmann took the victory, crossing the finish line a mere .057 seconds ahead of Bauman. It is particularly thrilling to see Lehmann’s success as he has only attended four out of the 12 races this season.

After the excitement of the Pro Singles, the Grand Nationals race got underway. As I had mentioned earlier, Henry Wiles won his 10th Peoria TT in the Grand National Championship but not without a fight. Jared Mees, currently the points leader in the series, rode hard, but lost ground when Wiles glided through some traffic to expand his margin.

Wiles crossed the finish line 1.81 seconds before Mees with ten fingers up to celebrate his tenth win. He then put on a great “after show” with a victory wheelie around the track, followed by another victory lap with his fiancé. Behind Mees came Jake Johnson, currently holding third place in the championship. The win moved Wiles from eighth to fifth in the Grand National Championship points standing.

If you’re hoping to catch a flat track race this year, there are still four left in the season with stops in Virginia, Illinois and California. I, personally, will be at Springfield checking out more of the action. Springfield has it’s own character and history – but that’s another story. Visit AMA for times and locations and support your local race track!