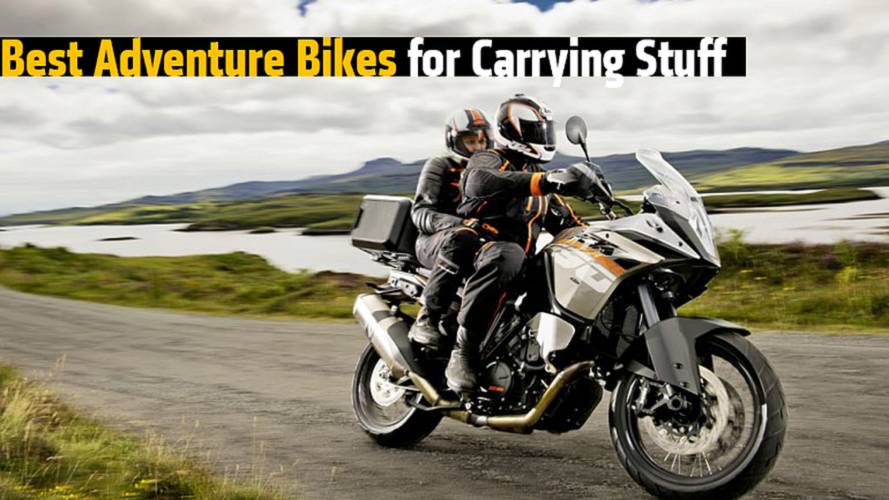 We examine which Adventure bikes carry the most weight and electronics.

The world we live in is powered by SUVs and pickup trucks. We love to haul stuff. Hauling the kids to the park, sports equipment, gravel for the driveway, mulch for the garden. You get the idea, we haul stuff. Just visit our sister site, DriveApart for more coverage of hauling trucks and SUVs.

Today's crop of adventure motorcycles show that need for storage. Whether you're transporting camping gear, riding gear, luggage, rain gear or just a bottle of soda, we examine which bikes are able to carry you and your stuff the best.

All the bikes for this article are the base model in their series. No additional accessories were accounted for. If you purchase a BMW 1200 GSA or 1190 Adventure R, for example, the capacities will be reduced by the additional weight of the factory accessories. Capacity is further reduced by the combined weight of rider and passenger. To go along with the carrying capacity, we list alternator output of each motorcycle. The more power the charging system has the more accessories can be used on the without draining the electrics. Handy for charging your phone, powering GPS or using auxiliary lights for off road or night riding.

These are all recommended weights and not what people have done with these bikes. We have all seen them loaded down straining under the sheer magnitude of what's been strapped to them. Look for a follow up on smaller bikes and what they can carry. You might be surprised how useful they are.

Let's start with the undisputed best seller in the ADV category, the BMW GS. BMW lists the wet weight of its GS, total weight with fuel at 90%, at 525 lbs.The GS can be outfitted with just about any setup a person can come up with, but all that farkling has a limit. On the GS that carrying limit is 467 pounds. BMW's alternator is listed at a 510W which is middle of the road for capacity. Plenty of power for devices but many competitors offer more. To be fair to the GS it is the most accessorized bike here and truly the Gold Wing of the bling market for ADV bikes.

KTM has only recently become a major player in the large adventure bike market. The 990 has always been a well-balanced performer, but sales were never brisk. The 1190 really changed all of that for KTM resulting in record sales month after month.

The big KTM is listed at 467 lbs with an empty fuel tank. Factor in five gallons of fuel in that six gallon tank and you come up to 497 lbs. Still sub 500 but that does reduce the total carrying capacity to under 400 lbs (393 to be exact).

Alternator output is 450W making this a great motorcycle, but less capable of carrying or powering your stuff. For example, riding two up with a combined 350 lb rider and passenger you have 43 lbs of capacity. Reduce that by any crash protection and you are left with the capacity to carry a Ziploc bag full of Cheerios.

Yamaha's Ténéré has been around for a few years and had a nice evolutionary upgrade for 2014. Weighing in at 575 lbs fully fueled, it certainly isn't a lightweight. Total carrying capacity is 469 lbs and the alternator cranks out an impressive 600W. The Ténéré weighs more than the GS and the KTM, but it can also carry as much as the GS and more than the KTM with that weight. Not too mention the additional output from the alternator can power more devices.

The Triumph Tiger is another imposing motorcycle. With the high center of gravity it's a intensely fun motorcycle to ride on the street. Sporting a dry weight of 502 lbs and a wet weight of 570 lbs, the Explorer is not the heaviest motorcycle listed but it's not svelte either. Carrying capacity is 489 lbs and with an alternator that kicks out 950W this is a serious bike to haul your stuff with. The one other interesting specification here is that the Explorers alternator is on demand. Meaning it only generates the power needed while the others always make the same amount for a given RPM. This Explorers setup is a just a bit more efficient. With the most carrying capacity and the largest alternator the Tiger Explorer is the winner when it comes to moving your stuff.

Suzuki's newest V-Strom started out of the gate with major publication accolades but has since tapered off. The big Strom tips the scales at 533 lbs fueled. That definitely puts it on the lower end of the scales. Carrying capacity is 437 lbs with the alternator putting out 490W. This bike has a major emphasis on light: Light weight, light on capacity, light on price.

The Ducati Multistrada is the Italian firms take on an adventure bike. Being Ducati, it is heavy in the sport with razor sharp handling, head of the class power and amenities. How does it carry you ask? The Multi weighs 494 lbs with a carry capacity of 454 lbs. Alternator capacity is a meager 400W. That may power your espresso maker but don't expect to steam milk at the same time.

Aprilia also came to play in this category with their Caponord. They have a similar approach to Ducati with a very road focused motorcycle. Wet weight of the Capo is 553 lbs, carrying capacity is just over 400 lbs with alternator output at a healthy 690W. Plenty of power for devices you can't carry. That 400 lb carry capacity is fine for one person plus stuff, but add a second person and you run out of lift quickly. It will, however, power the espresso maker and steam milk.

Hopefully this will help those of you who are shopping for a new large adventure motorcycle decide which is best for the amount of stuff you want to haul. Since most of the bikes will be outfitted with luggage and possibly carry a passenger knowing a manufacturers weight capacity is very handy. Full breakdown in the table below.