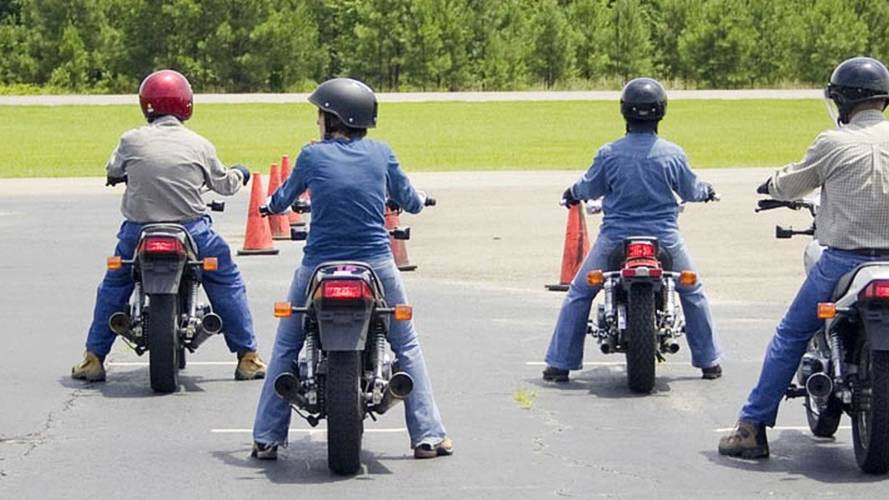 Motorcycling is a dangerous hobby. Anyone who has ridden for any considerable amount of time has come to the realization that there are any number of ways to get injured on a bike. Experienced riders learn to mitigate those risks. Good riders will attempt to always be seen by traffic, and will ride within his/her personal limits and the limits of his machine on the street. Both good and great riders will exercise caution and care in all traffic situations.

Safety instructors can teach a new rider how to make themselves known in traffic and they can stress the importance of riding with caution, but what instructors cannot do is prevent young or inexperienced riders from purchasing a motorcycle that is far beyond their limits. A very basic form of tiered licensing is a step in the right direction for rider welfare in the USA and this article outlines what I think could be an effective system.

During my time as a Rider Coach in Pennsylvania's PAMSP, I've encountered numerous young men and women who want either the fastest or the biggest bikes that they can afford for their first motorcycles. I've seen students struggle through the Basic Rider Course and then hop on an R1 to ride home.

In my opinion, and in the opinion of many riders and instructors, that is a recipe for disaster. A new rider, hopefully fresh out of a BRC, with only the basic skills required to move a small and extremely light and underpowered bike down the road can go out and buy a new BMW S1000RR with nearly two hundred horsepower or even a new Harley Road Glide Ultra that weighs nearly a thousand pounds. Either option can result in the injury of the motorcyclist and damage to the bike itself.

This BMW is aggressive for a beginner.

The rider's age is also a concern. Understanding the flow of traffic and the way that people react to certain things on the road is a skill that comes with time. Young riders often don't understand how traffic will react to a bike, and when they get surprised, they grab the brakes aggressively. On a supersport, that can spell disaster and on a big heavy bike in slow moving traffic, you're likely going to drop your machine.

Teenagers can't just hop in a car and do whatever they want. They are required to have an adult with them during their permit period and they often can't drive after dark. A motorcycle permit has no such restriction. When you're out there, you're alone. That's part of the appeal of riding a motorcycle, and having a tiered licensing system wouldn't change that.

Removing the freedoms that come with a bike, like the ability to hop on and disappear, is not the intention of a tiered licensing system. It would simply force a new rider's hand a tiny bit in their choice of a first bike.

Many European countries require a certain amount of time spent on a 125cc bike and then a 250cc and so on until you become a fully licensed rider. A 125cc bike would simply not work in the USA— they are too under-powered and too small for American highways. The Honda Grom is a great example of this. It's a fantastic bike and they are a load of fun, but as a highway commuter, they are inadequate. Many similar bikes to the Grom just don't have the power to merge with highway traffic that is doing 75 or 80 miles-per-hour.

Instead, what I would propose is a cutoff at 50 horsepower for the bottom tier of a potentially two-tiered system. That leaves an excellent array of choices for new riders in the entry-level sportbike class. It would allow people who gravitate towards cruisers to get something with a bit more pep than what would be allowed by a conventional tiered system based off of engine displacement.

READ MORE: How To Ride In A Group | RideApart

Many of the small displacement cruisers like the Suzuki TU250x are a bit underpowered for highway use. A horsepower limit would allow cruiser riders to take a Boulevard c50 or something similar without the option of choosing something overly heavy and unwieldy. The common trend with cruisers that make less than 50 horsepower is a curb weight at or around 500 pounds, which would make them much easier for a beginner to handle than a full dresser or a GoldWing.

Riders aged 16-18 would be stuck in the bottom tier until they come of age and then they would be subjected to the rules that an older new rider would have to follow. An older new rider should be stuck in the bottom tier for a minimum of one year with a mileage requirement. If the rider doesn't hit the predetermined mileage, then the rider would stay in that first tier. The mileage requirement would prevent people from buying a bike and simply parking it in their garage until they can get the bike that they really want. This system would be exceedingly simple and not nearly as intrusive as some of the programs found overseas.

Young riders would be stuck in the lowest tier in order to gain road experience. As mentioned earlier, the tiered system would facilitate learning on a much more friendly motorcycle. On a more reasonable beginner bike, the rider would spend more time being aware of their surroundings and the actions of the traffic around them since they are on an easy-to-ride bike.

Having a tiered system could also help young riders convince their parents to let them get a bike in the first place. I know that when I wanted to start riding on the road my parents were vehemently against it in spite of my long history of dirtbike experience. They thought that it would be too dangerous. A tiered system could be the first step in a longer line of teaching rider safety and in changing how the public views motorcyclists. If the general public views motorcycling in a safer light, then more people will start to ride and more riders means more rider friendly legislation—maybe even the legalization of lane-splitting nationwide.

A Vast Array of Bikes to Choose from

READ MORE: QOTD: Did Your Parents Sway You Towards Or Away From Motorcycles? | RideApart

The recent competition between manufacturers to secure a foothold in the entry-level category of riders has been great for those who enjoy smaller and cheaper bikes. From the CBR300R to the RC390, new riders would have a great choice between manufacturers, power, options (many learner bikes now offer ABS), and overall price. There are also numerous entry-level cruisers that would fit into this category. It's a great time to look for a small bike.

For tiered licensing to work in the US, the tiers can't be super restrictive since riders would probably rebel. This sort of small infringement on choice could be just enough to promote the safety and well-being of all riders and it would hopefully keep more new riders in the hobby.

A tiered licensing program will also benefit the riders of many bikes that would be out of the first tier's reach. An experienced rider of a supersport or a superbike would, in theory, see their personal insurance rates drop with the trend of more experienced riders gaining access to the more powerful bikes. The heavy full dresser bikes that many new riders attempt to ride and simply can't muscle around would also see a similar decrease in insurance premiums. There will always be unsafe riders, and safe riders will always bear the brunt of the repercussions against them, but at least with a tiered system those unsafe riders might be a bit better trained by the time they get the bikes they really want.