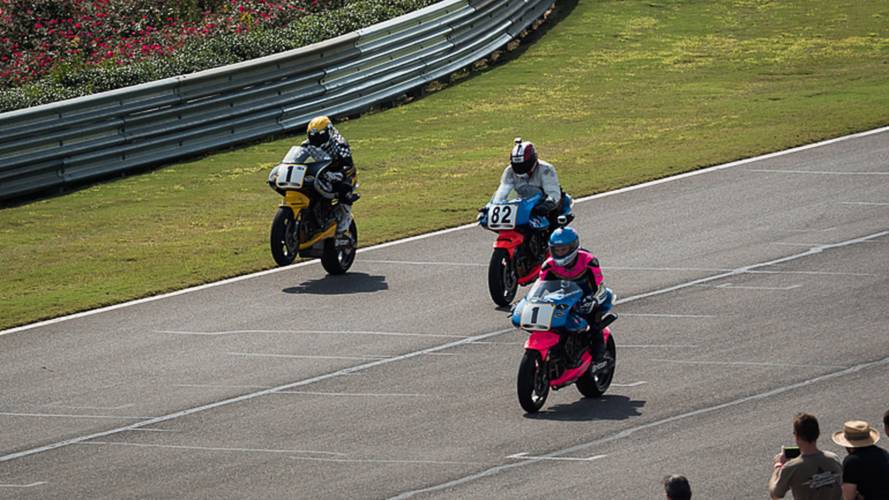 The Britten V1000 is impressive because after all these years it is still looks like something new, a concept bike you wish someone would build.

One of the many highlights at this year's Barber Vintage Festival, were the exhibition laps made on the raceway by four Britten V1000 Motorcycles. The display was remarkable because only 10 of the revolutionary machines were ever made.

Four Britten V1000's on the Barber Motorsports Park Raceway... At the Same Time

The Britten V1000 was created by engineering genius, John Britten. With the help of a few friends, Britten built the machines from scratch on a shoestring budget in his backyard workshop in New Zealand. The Motorcycle was way ahead of its time in the early 90's, and radically different from anything that had ever been built.

READ MORE: The Best Sportbikes of the 1990s | RideApart

The V1000 featured a fully-stressed engine with a ducted under-seat radiator. The top chassis, girder and swingarm of the V1000 were all constructed from carbon/kevlar composites and featured a Hossack front suspension, which consists of two wish-bones and an upright and steering linkage.

If the creation of these machines wasn't incredible enough, the performance of the V1000's on the world racing circuits was astonishing.  The Britten V1000 kicked the collective asses of the best racing motorcycles from Italy and Japan alike.

The Man and His Legacy

Sadly, John Britten passed away from cancer in 1995, but his legacy lives on in the machines he dreamed up and built.  His untimely passing has left many wondering what fantastic two-wheeled machines he would have gone on to create had he lived a longer life.

To see just one of these machines stretching its legs on a race track would be unique, but the spectacle of four at once was perhaps a once in a lifetime occurrence. Fortunately for the rest of us, the wealthy collectors who own the remaining machines are cool (crazy) enough to let these rare bikes out onto the track.

Even today, the sight and sound of the Britten V1000 is like no other motorcycle. The Britten is impressive not only for its records or its unlikely origin. The flashy machine is amazing because after all these years it still looks like something new, a concept bike you wish someone would build.

What's more, it still preforms against modern machines. To watch and hear a V1000's 8-valve, 60-degree, fuel-injected, 1000cc v-twin making 165bhp@12,000rpm, rip down the front straight before effortlessly lofting a power-wheelie beneath a checkered flag is something close to a religious experience.