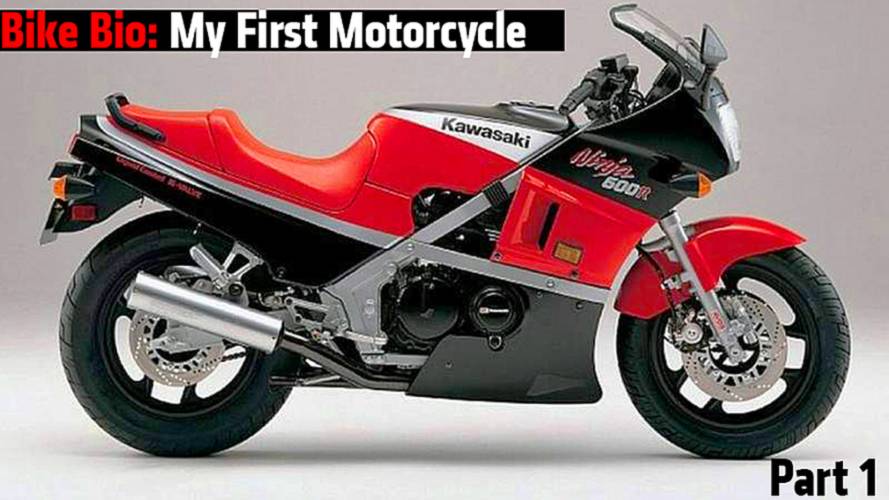 Greg tells the story of his first motorcycle he bought and built when he was 18 years old.

I was just thinking to myself: Wow, I was stupid. Right before my high school graduation in 2006, I scored a job at my local Honda Motorcycle dealership. This job was by far the most employed fun I have ever had. I mean, I was the helper of a dude who graduated with honors at Motorcycle Mechanics Institute (MMI), and I was paid $8.25 an hour to boot.

Working in a place like Honda of Winston Salem, North Carolina, meant following the unsaid rule that all employees should have a motorcycle—well that’s what my 18-year-old self thought. There were over five hundred units in stock for me to buy, but being fresh out of high school makes the amount of money you have inversely proportional to the amount of fun you have, and I had a lot of fun. So, off to Craigslist I went.

I opened the website, clicked on “motorcycles” and typed “doesn’t run” in the search box. A minute later, I found it! A 1985 Kawasaki GPZ600R, the baby brother to the bike that Tom Cruise™ rode in Top Gun. The description read something like, “Ran six months ago but it don’t run now maybe dead badery." No picture, but a quick Google Image search sparked my lustful imagination—I had to have it.

When I met my Clydesdale, it was leaning under a protective layer of decomposed leaves. $500 was the asking price. Despite being blind with love at first sight, I somehow managed to keep my appearance under control, low-balling the guy with a $300 offer.

We both muscled it into the back of my dad’s truck and cinched the tie-down straps. When I wasn’t looking at that sexy egg-shelled finish in the rear-view mirror, I was swerving to the Honda shop to drop off my new project. The next day was one of the few times I showed up to work on time. I sat staring at the bike, waiting for my colleagues to arrive.

Evan, my MMI mentor, walked down the ramp into the warehouse and instantly questioned the technological artifact I was working on. During the short time we had to familiarize ourselves with this machine, Evan gave me a history lesson of the GPZ 600R. He pointed out all the cutting edge technology like the Automatic variable Damping System (AVDS), and how desirable this bike was in its day.

After an hour or two of break time work, I replaced the spark plugs and battery, disassembled, cleaned, and reinstalled the carburetor, and started filling up all of the containers to prep for a run. When I poured water into the radiator, it went through the engine, straight to the floor. Evan quickly crouched down to investigate. I heard a loud laugh come from under the bike as he told me I had a cracked engine block. I allowed myself a moment of swearing and moved forward, determined to make it run again.

The warehouse had an I-beam winch mounted on the ceiling, and the parts department had JB-Weld two-part epoxy. Considering the crack was on the outside of the cylinders’ water jacket, the pressure exerted on the crack shouldn’t have exceeded 16 psi, depending on how well the 1985 radiator cap worked. I borrowed a Dremel tool from Evan and began scouring the surface around the crack so it would easily accept epoxy.

This is where the winch comes in. I hooked the cable to the bottom triple tree and hoisted the bike vertically so the JB-Weld could puddle on the crack instead of running off. Before the beer-thirsty shop manager could yell at me to leave, I made a plan to get this thing driving by lunchtime the next day.

According to plan, the JB-Weld hardened perfectly and did not look like it would leak. I filled the radiator, and sure enough, it worked! The next step was gas. I used our redneck IV for this. It is a 2-liter soda bottle with a petcock and fuel line hot-glued into the cap. I hooked it up , crossed my fingers and closed the starter solenoid’s circuit with a 21mm open end wrench.

The Kawasaki turned over quite a few times, but wouldn’t stay running. Evan grabbed a can of brake parts cleaner and sprayed into the unfiltered intake. The bike got some rpm’s from the parts cleaner and eventually ran on its own fuel. The thing was loud, but I was eighteen; I wanted it to set off car alarms. So I grabbed Evan’s Sawzall and chopped the cans off.  About five minutes after that, we got the mixture right, and I set the idle speed as low as it would go. It sounded like a funny car pulling up to the Christmas Tree.

A first ride will go one of two ways: the rider will either exercise caution and safely test all functioning parts of his machine, or he will do as I did, and take it to the rev-limiter. This was the first motorcycle that I bought with my own money, and now it worked!

There were a lot of things I should have done, like fixed the whole “radiator and oil pump sharing the same fluids” problem, but I treated my new Kaw like I used to treat my bank account: get it out of the red, and ride on!

This is Greg leaving high school. (Photo courtesy of Greg's own mind)

Changed Status to “In A Relationship”

Like all basket case motorcycles, my GPZ needed constant attention. I rode to the man mall and bought a metric 1/4 inch drive socket set, zip ties, wire strippers and a flashlight for my Macgyver kit. If you’re taking notes, I would also suggest getting some rope, a few trash bags, a bottle of clear-eyes and roll yourself about ten feet of gorilla tape.

I started commuting back and forth to work, constantly bringing the bike back home more mechanically sound than when I left. In just a few weeks, I trusted it to not leave me stranded somewhere.  This was the point of my life where I fell in love with motorcycles.

I always wanted one, but never knew what is was really like to ride everywhere. I became addicted. Thirty extra miles on the way to and from work, or anywhere else for that matter, became normal.

Greg and Jesse on our way up Highway 1 in California.