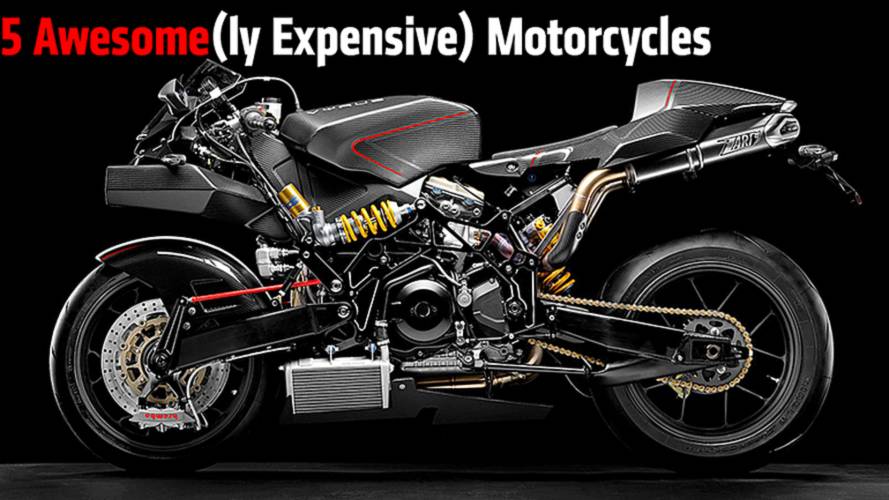 Here are the Top 5 Expensive Motorcycles to watch out for in 2014.

When thinking about purchasing a new motorcycle, a rider should ask him or herself the following questions: What type of riding will I do? Am I able to handle the bike’s power? Is it practical? Will I be able to make the payments?

Or the rider could just say “screw it”, sell the other bikes, house, maybe a kidney (you really only need one, you know) and drop the cash on one of these ridiculous rides. These are all production models, and while one probably won’t find them at your local bike shop, with a little tenacity (and a really, really big chunk of change) they theoretically can be purchased. And these aren’t just eye candy: these 5 bikes are performance machines, not for the light of wallet or faint of heart.

Several of these bikes were unveiled earlier this year and rather than bore you with individual posts about each bike, we decided to make a list of the Top 5 Awesomely Expensive Motorcycles of 2014.

Before you leave a comment about our photo editing skills (“looks like you guys cropped out the front of the bike”), no, that’s what the Vyrus 987 C3 4V looks like. Vyrus is a small, high-end, high-tech Italian motorcycle manufacturer. If you go to their website, you’ll find that it’s as confusing as the picture of the bike itself. (Seriously. Is it coming or going? Did they forget the forks?)

The 984 C3 2V is powered by a 1198cc Ducati-sourced engine that produces 211 hp…yeah, there’s a few more tech specs on the site, and it would take a guy with a PhD in Mechanical Engineering to explain that suspension, but really, the thing costs at least $90,000, isn’t currently being sold in the U.S. and you will never, ever get your hands on one, so what’s the point?

Sure, this is a letdown after seeing the Vyrus, visually speaking, but the Ducati 1199 Superleggera is, according to the Ducati Superleggera webpage, “the most exclusive and most extreme Ducati ever made." The folks at Ducati are at bit coy with the bike’s performance numbers, saying that the 1198cc engine gets “200+” horsepower and has a top speed of “really frigging fast” (kidding, they don’t say that, but they might as well; the thing weighs in at 390 lbs wet, 26 lbs lighter than the 1199 Panigale R).

In addition, the bike sports ABS (you’ll need it, for those panic stops at 175 mph), full carbon fiber bodywork and an add-on racing kit for those days when you want to pop down to the track and make everyone there weep tears of woeful inadequacy. Ducati is only building 500 of these, so you’ll need to act fast and reserve one. Assuming, of course, that you have $65,000.

Sure, you could buy that Ducati Superleggera, but if you really want to draw attention to yourself, you’d take that extra $65,000, go to the Confederate online store and order yourself an X132 Hellcat Speedster. (No, you don’t need to pay for the whole thing up front. The folks at Confederate just want a non-refundable $10,000 deposit.)

The Hellcat is a rich guy’s bike, but it’s certainly not a toy; the bike’s carbon fiber and aircraft-grade billet aluminum components help keep the weight down to 500 lbs wet. That weight comes in large part from the hand-built 132 cu / 2163cc V-twin engine, which produces 121 bhp and 120 foot-lbs of torque. If the Hellcat seems too ordinary for you, you can try to order an R135 Wraith Combat. They’re only building seven of these, so good luck.

The venerable British motor company Ariel is back with the Ace, which—in the spirit of pretty things that only really rich people can afford—is a somewhat enigmatic bike. The company’s website says a lot about the Ace, without really saying much of anything.

READ MORE: How to Commute on Your Motorcycle

It’s powered by a Honda V4 VFR1200 engine (1237cc, 173bhp) that according to Ariel will push the bike up to at 165 mph. The bike will also be available with a DCT option, presumably for those who are too gripped by fear to remember to shift while going 165 mph. Riders also have the option of choosing Ariel’s girder front suspension over traditional forks; Ariel claims that this suspension gives the same feel as old-school forks, with better response over bumpy terrain and in the corners. This is the Value Bike of the bunch; anticipated retail price will be around $35,000 USD. So if you were going to buy a Hellcat, you’ll be able to buy two Aces!

This is the Ecosse Titanium Series FE Ti XX. Pretty nice, yes? It’s powered by a hand-built 2100cc fuel-injected V-twin that produces 200 hp. And, as the names indicates, it’s got a lot of titanium. Mainframe? Titanium. Subframe? Titanium. Swingarm? Titanium. Exhaust? Titanium. Do you know why titanium is so expensive? Because the folks at Ecosse used it all. If you want one, you’ll need to contact Ecosse directly and see if they can build you one.  If you have the $300,000 they’re asking for the bike, I’m sure they’ll be able to accommodate you.