The Allstate Ride for Awareness: Adventures Across 50 States 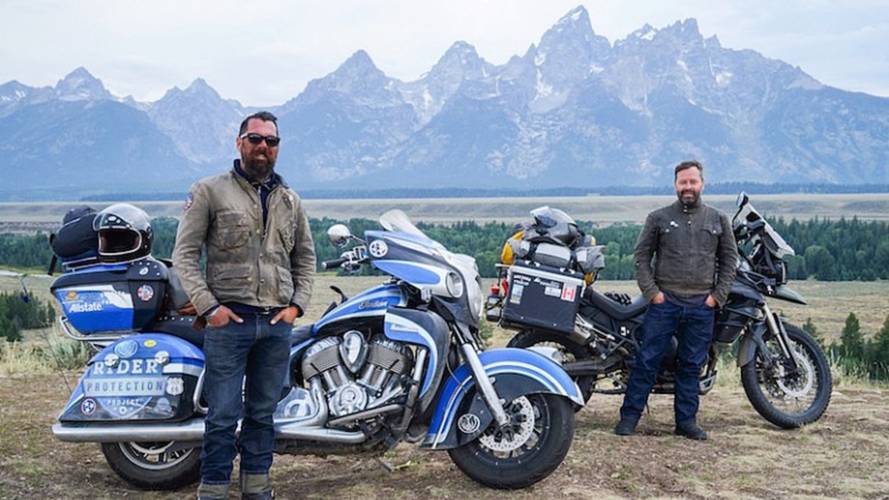 It’s all in a summer’s work for B.A. Moto’s Nate Hudson.

Though he no longer sported the signature beard from his 50 state ride, Nate Hudson is every bit the iconic biker, and it's no wonder why Allstate hired him to complete their Ride for Awareness campaign.

I met up with him one late Thursday afternoon while he was pulling into B.A. Moto, the motorcycle shop he co-owns with his brothers in Signal Hill. Nate was fresh back from a parts run, and ready to talk about everything from LA traffic to the life-changing experiences he had over the course of his trip.

READ MORE:  How To Motegi: A Guide On Getting To Japan's Greatest Race | RideApart

The Allstate Ride for Awareness was a job Nate took that entailed traveling through all 50 states and visiting their capitals to promote safety for everyone on the road—motorcycles and cars alike.

To that end, he pushed to have the following question added to written driver’s license exams: “What is the most commonly caused accident between a car driver and a motorcycle rider?” The correct answer? “When a car makes a left turn in front of a motorcycle at an intersection.” He also spent plenty of time talking with state officials about traffic safety, accident statistics, and what needed to be done to make the roads safer for all.

The Impact of Nate Hudson

In spite of telling me he was, “Excited enough to be a monkey riding a bike,” since he had taken plenty of long trips with his friends on his own dime, Hudson brought much more to the campaign than simply piloting Allstate’s two-wheeled billboard and passing out Allstate press packets at each stop.

Hudson also had a hand in planning the endeavor and brought another angle to all the talk of safety. He told me, “I’ve been riding for a while, and honestly I feel you can avoid all accidents on the bike. You gotta be on defense at all times.”

For all of his slicked back hair, old-school garage decor, and inked up arms, Nate Hudson espouses a very compassionate and accountable attitude, far from the stereotype most people have of bikers. It’s not us versus them, and it’s not that all cars are the bad guys.

“Guess what?” he says, “I’m a car driver, too. I drive cars. I drive trucks. I’m the same thing. I just like two wheels more than cars.”

He’s quick to acknowledge that nobody ever knows what’s going on in the sedan or SUV one lane over. “It’s not that the cars are doing it intentionally. It’s not like they’re , ‘Oh, there’s a bike. I’m gonna hit it...’ They could have had a bad day, they could have kids in the backseat yelling, they could be stressed out about their job.”

Acknowledging that the problem is more often distraction than malicious actions, he emphasized, “I haven’t been in an accident in years." (Knocks on wood). "But if I get in an almost accident, it’s because I’m zoned out. I’m not paying attention. I’m in la-la land not fully concentrating, and yeah, it was the car’s fault, but I ...I wasn’t on full game.”

The trip frequently did require him to be on full game, as he put it, for all the miles he had to cover and circumstances he had to face. Much of the trip was done solo. “There was no chase truck. There’s no van. There wasn’t a crew. It was just, like, myself. Unless a friend would join me.”

Hudson cited an incident involving a particularly bad storm outside of Sturgis. At the time, he didn’t have any of his buddies with him, and sighted one of those storms that he just knew would be a bad one.

After he made a left onto the two-lane highway, Nate spotted a Harley bagger on its side and did what he could to pull over to check on the other rider. However, once pulled to the side of the road, the winds were so strong that he had to fight to keep the bike on its side stand. Pushing with all of his weight with the bars cocked all the way over to the left, he couldn’t get off the bike, and was resigned to listen to jaw-breaker sized hail stones hitting his helmet and filling his lap. When he looked up, he said that the road seemed to have disappeared from all the rain and hail.

“I just got fearful. I mean, you can’t do anything!” he explained, saying he wasn’t sure if it was a tornado. He felt trapped on the bike.

“Then, eventually I knew it was going to happen ... the bike went ‘p’kow!’ and got flipped over to the right side, I flipped with the bike...landed on my hands and knees, and I was like, ‘Oh shit, I’m free from the bike.’ And the bike was completely on its side.The wheels were off the ground, flat, kick stand sticking straight up, too!”

It turned out the other motorcyclist was ok and the driver of a truck offered Hudson shelter in the vehicle. Nate didn’t want to get it wet though, so he just crouched under the tailgate and cracked up about the situation.

While on the road to Reno with his buddy, Viet, the two encountered another noteworthy storm. Yet again, it was one that garnered an, “Oh, that’s gonna suck,” from Nate the instant he saw it. They were then in the thick of it, getting smacked by hail. Nate was in the lead, and had a startling moment as he looked ahead. There was a mudslide going across the highway.

He explained: “I’ve never been through a mudslide. What do you do? When in doubt, throttle out. So I chop the throttle. I’m like, ‘Shit.’ Then there’s a rock about this big in the middle of the lane, so that means the mudslide just happened, because there’s no way a Honda is going to go over that. I kicked my foot out, like, trying to give the signal, ‘There’s something in the road.’ But it was so fast. We both just went right through it. I felt the bike go, ‘Kwsssssh!’ And it was just weird, but we just throttled right through it and then got through it, and we just kept going, and it was haling the whole way until we got off the freeway in Reno. I looked over at Viet, and he looked over at me, and we’re like all, ‘Yeah!’ He high-fived me, and you know, usually I’m the high-fiver.”

The Importance of Community, Wherever You Are

Sometimes the hazards of the road were more mundane—amplified by the conditions. Take running out of gas, for example. In the city, it’s annoying and may have you pushing your bike to the nearest gas station. Riding through beautiful but remote locales like Alaska makes knowing your machine that much more important.

Nate related how many times there would be a gas stop on the GPS, but when he rode by it would be, “green shrubbery growing over everything. Obviously you can tell that thing’s closed. It’s been closed for a loooooong time.”

Given that circumstance, I asked if he was ever worried about running out of fuel, and his answer reflected one of the aspects of the journey that changed him the most: the good will of people. He knew there would be someone who’d be willing to help. Throughout the journey, people reached out and offered him places to stay, took him out to dinner, and just wanted to talk. They welcomed him into their homes, and sat around campfires BS-ing and swapping stories into the wee hours of the morning. He was impressed by how people he had never met before weren’t trying to make their mark or get some recognition. Thy genuinely wanted to help.

Listening to the way Nate talked about people helping each other out of purely intrinsic motivation, I couldn’t help but feel it echoed his father, who passed away towards the beginning of the campaign.

Hudson said that at his father’s memorial service, he learned a lot about him from all the stories people told when they came up to pay their respects—particularly, how much his father helped people on a one-on-one basis, but never talked about it. At the end of the day, Hudson said he wanted to complete the campaign for his father.

READ MORE:  QOTD: What Was Your Scariest Moment on a Motorcycle? | RideApart